Every code has expressed outrage at Russians and their lackeys 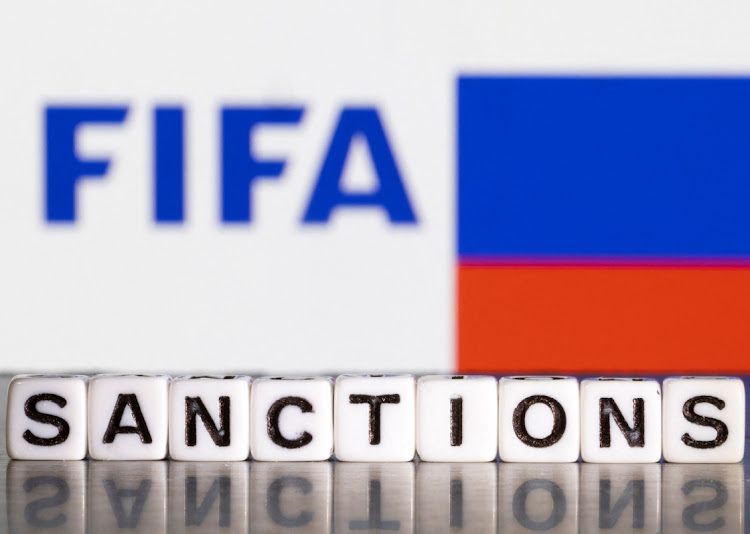 Plastic letters arranged to read "Sanctions" are placed in front of the Fifa logo and Russian flag colors in this illustration photo. Picture: REUTERS/DADO RUVIC

The cards continued to fall this week. On the eve of the opening ceremony, the International Paralympic Committee (IPC) caved in to pressure and told the Russian and Belarusian athletes they would not be allowed to compete at the Paralympics. That it took them so long to make the decision is a disgrace, the umming and fudging and trying not to make a decision catching them out with a bang from the other nations in Beijing and a whimper from IPC president Andrew Parsons.

“The environment in the village is deteriorating,” said Parsons. “In the past 12 hours, an overwhelming number of members have been in touch with us. They have told us that if we do not reconsider our decision, it is now likely to have grave consequences. What is clear is that the rapidly escalating situation has now put us in a unique and impossible position so close to the start of the Games.

“In taking our decision yesterday we were looking at the long-term health and survival of the Paralympic Movement. We are fiercely proud of the principles and values that have made the movement what it is today.”

The IPC’s solution was to allow Russia and Belarus to compete under a neutral banner and their “country” would not be given a place on the medal table, a mealy-mouthed nothing of an action, which ranks for cowardice and inaction with Fifa’s initial refusal to ban the two countries outright.

We’ll use that neutral flag thingy for them, said Fifa president and Sepp Blatter-lite wannabe Gianni Infantino. Oh no you won’t, said most of the rest of the world. We just won’t play them. Oh. Bugger. Um ... well, then we will ban them and I do hope Vladimir doesn’t get cross with me, said Infantino.

“It still took Infantino four days to reach a decision that should have taken four seconds,” wrote Henry Winter in The Times, describing him as “pusillanimous”.

“While Ukraine’s sovereign soil cleaved under the tracks of Putin’s tanks, Infantino dithered shamefully before finally suspending Russia from football, including the World Cup play-offs. It is a delay steeped in blood.

“A more prompt decision ... might have made Putin hear the sound of silence from cheerleaders such as Infantino who’d ritually, dishonourably sung his praises.

“Sport has always been weaponised by Moscow and exile from a tournament that Putin secured backstage in 2010 and hosted front of house in 2018 would have embarrassed him and his country.

“Along with sanctions, terminated sponsorships and the last night of the Gazproms, becoming sporting pariahs would also have damaged Russia. Welcome to the isolation room.”

The cards still fell. Formula One has terminated its contract to run grands prix in Russia; Roman Abramovich is selling Chelski; UK motorsport will not allow Russia’s Nikita Mazepin to race at Silverstone this year; World Rugby has suspended Russia and Belarus, much to the chagrin of Russia coach Dick Muir; the International Tennis Federation cancelled all events in Russia; and the UCI have hooked cyclists in Russia and Belarus.

The IOC’s nonsense that sport and politics should not mix has been tested and found wanting, a myth told to cover up the sportswashing they have long been party to, cosying up to dictators and human rights abusers, smiling as the bombs fly, people disappear, a genocide is carried out in real time, children are bombed and truth is warped.

They have blood on their hands and in their bank accounts. How they sleep at night is beyond me, but, you suspect, they care not a fig for those who suffer, regarding them as collateral damage in their little game. But, now the cards are falling and the IOC and Fifa are trying to sneak back on to the right side of history. It’s too late.

For Fifa it was four days too late. For the IOC it is decades too late. Banning Russia would not have stopped the invasion of the Ukraine, but it would surely have added to the noise of condemnation, a wall of sound that Putin will find hard to ignore once the shooting stops.

He was a forerunner to the T20 specialists, and his son is following in his footsteps
Sport
4 months ago

Two enthralling stories have emerged, one involving pants and the other a long-awaited gold
Opinion
4 months ago