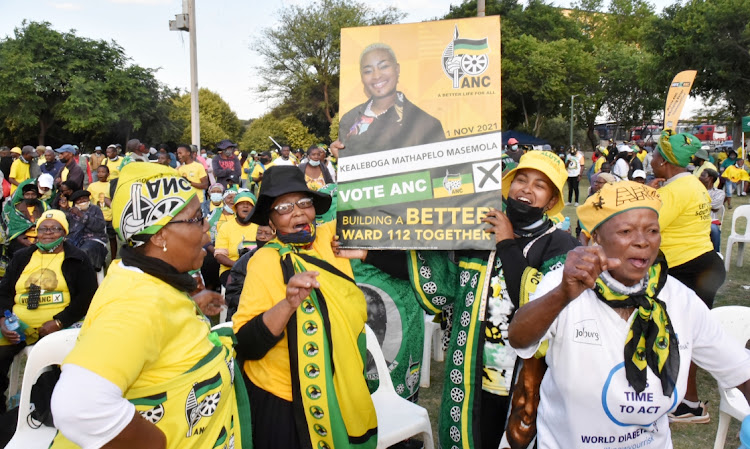 In the run-up to to the 2014 national elections, these were slogans of triumphalism thrust on South Africans by ANC supporters as they cheered their party on to an overwhelming victory in that year’s national elections.

The ANC captured 62.2% of the vote in 2014, paving the way for the installation of Jacob Zuma for his second five-year presidential term. Five years before, the ANC had won 65.9% of the vote.

At these so-called victory rallies, usually held in early May, ANC-connected business people would show up in high-end cars and expensive designer clothes. These rallies gave them a perfect opportunity to showcase how financially muscular they are thanks to their party’s economic policies, which gave them access to lucrative state tenders and BEE equity deals.

Meanwhile, the party’s rank-and-file members who attended these rallies would be given ANC T-shirts and fed gqom, kwaito, house and amapiano music from loudspeakers. They danced like there was no tomorrow and forgot about their daily struggles of unemployment, poverty, inequality and poor service delivery.

At these rallies, it was as if the ANC had taken a page out of the book of Roman emperor Titus, who was famous for throwing lavish gladiatorial games at the Colosseum to whip up public support and appease the Roman gods.

They danced like there was no tomorrow and forgot about their daily struggles of unemployment, poverty, inequality and poor service delivery

If you missed these victory festivities and the fundraising gala dinners around them, you were regarded as an irrelevant nonentity. They were an opportunity to mingle with ANC bigwigs and up your chances of securing more wealth.

Fast forward to 2022, and the once-invincible ANC appears to be heading for defeat in the 2024 national elections. This after the governing party’s support fell below 50% for the first time in November’s municipal elections, dipping to 45.85% from 53.9% in 2016. As a result, the party did not hold victory celebrations. There was nothing to celebrate.

This electoral underperformance has resulted in the party losing all of Gauteng’s metros — Tshwane, Johannesburg and Ekurhuleni — to DA-led coalitions, comprising ActionSA, the EFF and the Freedom Front Plus. Having realised that the ANC is beatable, these opposition parties are on a mission to cut the party’s national electoral support to below 50% too, denying it an outright majority to govern the country.

The likelihood of the ANC being kicked out of power in 2024 puts at risk some of its economic policies, such as broad-based BEE and the Labour Relations Act, which are a bedrock of the party’s bid to attract voters.

However, these policies (along with poor governance and general policy uncertainty) are seen by investors as making SA less attractive as an investment destination. Corporates are reportedly hoarding more than R1-trillion in cash, which could be poured into the economy to ignite growth and employment.

These policies might undergo serious reform if the ANC loses in 2024. The party’s potential loss of political power might also close the door on its ambition to introduce expropriation of land without compensation.

BEE is criticised for having benefited a tiny, politically connected black elite and encouraging conspicuous consumption by that elite instead of helping black people build companies of their own that can become major producers and distributors of goods and services.

The Labour Relations Act, which regulates relations between workers and employers, is seen as containing clauses that make it too cumbersome to hire and fire workers and negotiate wages. Business owners and investors want more flexible labour laws but trade unions are vehemently opposed to any amendments.

However, no-one has really had a bone to pick with the ANC-led government over its handling of monetary policy, which revolves around the management of inflation. The Reserve Bank has kept inflation in check, comfortably inside the 3%-6% inflation target range, hiking interest rates whenever the upper end of the target is threatened by rising inflation and slashing interest rates when the opposite is true.

The ideal scenario for the central bank is to protect poor households from high inflation while keeping the cost of capital affordable for borrowers and investors.

In contrast, there has been discomfort about fiscal policy, which deals with government spending and how it is funded through taxes and debt. Between 2008 and 2018, SA’s fiscal policy failed to stimulate the economy while government debt surged.

We are now sitting with a situation where 21c of every rand collected in tax revenues pays for interest on public debt. According to the National Treasury, over the next three years debt service payments are expected to average R334.5bn a year, raising fears that spending on health and social development will be compromised.

To put SA’s public debt into perspective, overall debt has ballooned 700% from R577bn in 2007 to more than R4-trillion in 2021. Whoever governs the country after the 2024 elections will have to fix government finances and deal with an economy that rarely grows at more than 2%, as well as discouraged jobseekers that form nearly 50% of the country’s potential workforce.

With hundreds of thousands of businesses closing, less than 1,500 were able to access the SMME relief scheme
Opinion
11 months ago

The government spent R3.2-trillion on infrastructure between 1998 and 2019, but little of this rollout has reached rural areas
Opinion
1 year ago
Next Article