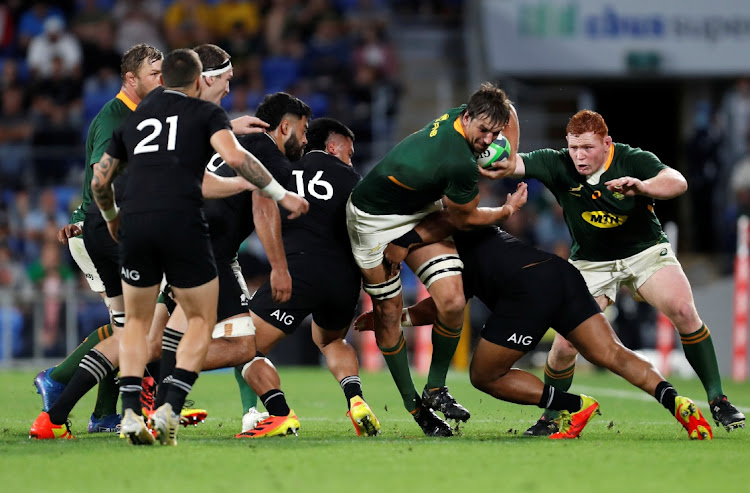 The Springbok victory over the All Blacks in their final Rugby Championship Test was particularly enjoyable for what it should have done to halt the growing Kiwi rugby arrogance.

Don’t get me wrong, I like New Zealanders. When they lose, they are good losers, which is unlike some of my mates in the UK media who continued whingeing about aspects of the recent British & Irish Lions series long after it had been decided. But who do the Kiwis think they are that they can tell other nations how to play?

The constant carping in the Kiwi media about the Boks playing style was getting tiresome. And some New Zealand rugby luminaries obviously thought so too, including All Blacks coach Ian Foster, who in the build-up to this most recent Test described criticism of the Boks as “a bit over the top”.

Foster knows the Boks are only doing what they believe gives them the best chance of being successful, just like he, if he had a different resource base to choose from, would also cut his cloth to fit the suit. He also probably knew only too well how fortunate his team was to escape with the win in that first of two clashes between the old foes.

Former successful Crusaders and Wallaby coach Robbie Deans, himself a former All Black, was more explicit than Foster.

“I think the Springboks are missing the creative genius of Cheslin Kolbe because he has the capacity to unlock games, but I don’t agree with the narrative that there is a specific way that you should play,” Deans told the New Zealand media. “What makes rugby is the ability for teams to choose a way that suits their DNA and gives them the best chance of succeeding. It’s very important.”

Exactly. And it is because their game is so testing to the All Blacks that the Boks have given as good as they’ve got against their old foe since the start of the Rassie Erasmus era. In the six matches played since the beginning of 2018, the Kiwis have won three, SA two, there has been one draw, and only once was the margin more than two points.

The Boks could have put Ardie Savea’s team away in both games and probably would have won both had they been more willing to attack with turnover ball in the first clash. The “what ifs” and “what might have beens” are now irrelevant though. Getting across the line as winners in this last game was hugely important for the Boks in that it took away any justification for the negative narrative.

You can’t poke holes in an opposing team’s game plan when that plan is good enough to beat you. That the Boks did more with the ball this time is also not a validation of the prior criticism. Bok coach Jacques Nienaber has always said his team will attack where the space is, and in the Gold Coast game the All Blacks did offer more space in the front field due to their concern about covering the Bok kicking game.

It was that space that the Boks attacked with ball in hand and it shouldn’t have required rugby rocket science to figure out it would happen. When there are 14 men in the All Blacks front line and just one player back, then kicking over that line is the better option.

That the Boks need to evolve their attacking game is not something Nienaber would deny. He readily admitted after the victory over the All Blacks that his team was a lot closer to getting the right balance between kicking, passing and running, but were still not quite there.

This testing southern hemisphere season, where the primary Bok objective was to beat the British & Irish Lions after 19 months of not playing together, was not the time for experimentation or for too much emphasis on evolution. What worked in Japan in 2019 had to be relied on.

The Boks lost two games against Australia when the accumulated mental and physical fatigue (they’d just emerged from isolation) got to them, for there is no other way to explain how the execution was so poor against the Wallabies.

However, the two games against New Zealand proved that while they may have lost a year to Covid, they have not lost ground. The carping criticism can stop now. Clearly the Boks don’t need to change their basic template because they are very good at what they do and it works for them.

Beyond Marius Goosen, it is hard to see who the Boks could turn to if there are injuries at flyhalf
Opinion
1 month ago
Next Article