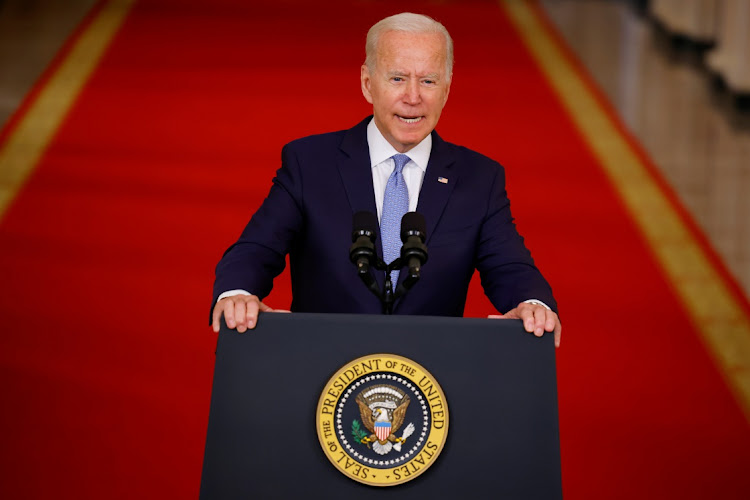 US President Joe Biden delivers remarks on Afghanistan during a speech at the White House in Washington, the US, August 31 2021. Picture: REUTERS/CARLOS BARRIA

US President Joe Biden said in a speech on Tuesday night that the decision to withdraw from the “forever war” in Afghanistan arose from a change of mindset.

The first mindset change was that the US was no longer interested in trying to achieve the impossible — creating and enforcing a democracy through military means, as it tried to do in Afghanistan. The second was an acknowledgment that the main challenge facing the US going forward would be China.

“The world is changing. We’re engaged in a serious competition with China,” Biden said. “We’re dealing with challenges on multiple fronts with Russia. We’re confronted with cyber attacks, and nuclear proliferation. We have to shore up American competitiveness to meet these new challenges in the competition for the 21st century.”

The US withdrawal from Afghanistan marks the end of an era where the US played a role as the world’s policeman, championing liberal values. The current liberal global order, with security matters looked after by the UN, financial matters by the World Bank, trade policy enforced by the World Trade Organization, and with the US dollar as the international currency, was established after World War 2. The US has provided the bulk of resources, as well as liberal ideological support for the liberal global order. It has also sent its young men and women to fight around the world in defence of it.

The change in mindset that Biden spoke of is not a personal change but reflects the prevailing US popular opinion. The people of the US, especially working-class Americans who have seen their standard of living decline steadily over the decades, do not want to shoulder the burden of being the world’s policeman any longer. After all, if black minorities are discriminated against whenever they step onto the streets, and if the average American youth can’t find decent jobs despite having good university degrees, why should they care about defending liberal values abroad?

In fact, despite Republican criticism of Biden, it was the Trump administration that began the US drawdown in Afghanistan. Bipartisan consensus in the US was and remains to get out of the country, to focus on the American economy and make sure China does not succeed in wrestling global pre-eminence away from the US.

After the US won the Cold War against the Soviet Union, marked by the fall of the Berlin Wall in 1989, US political scientist Francis Fukuyama announced that human history had come to an end, and that the liberal democratic model with its free-market capitalism had been proven the best humanity can do. We in SA, and more broadly in Africa, have much to thank the US for, specifically its advocation of liberal democratic values.

Would the white minority government in SA have come to the negotiating table with the ANC had the Cold War continued?  Biden was a vocal anti-apartheid voice in the US Senate in the 1970s and 80s, advocating liberal international values. The anti-apartheid coalitions across the West, admittedly including both communists and liberals, played a pivotal role in bringing the apartheid system to an end.

Historians will have the benefit of hindsight to ponder and assess the US role as the unipolar global power and world policeman between 1989 and 2021. As we assess that role it appears to me that on the African continent the consensus is that we are supportive and appreciative of the democratisation and free trade the US has promoted in the past 30 years. Most African countries are freer, more democratic and more prosperous, and we should give the US credit where it is due.

In other areas — including the 20-year occupation of Afghanistan and the many untold miseries this caused — I expect historians to judge the US more harshly.

• Dr Kuo, a former lecturer at the Shanghai International Studies University in China, is adjunct senior lecturer in the University of Cape Town’s Graduate School of Business.

More unequal now than during apartheid, the country appears to be treading the same path as its northern neighbours
Opinion
10 months ago

After Joe Biden announced return of the US, Xi Jinping proposes that it, Germany and France co-operate to help continent
Opinion
10 months ago
Next Article