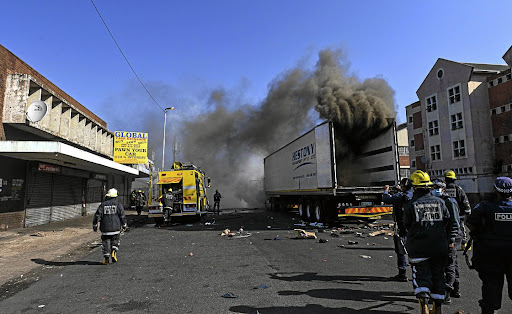 Firefighters try to extinguish a burning truck in the Durban CBD after it was burnt and looted during the Pro-Zuma protests. Picture: GALLO IMAGES/VOLKSBLAD/MLUNGISI LOUW

In most other countries the violent deaths of nearly 350 people would, at a minimum, result in the sacking of the police minister or even an entire cabinet, as happened on August 10 2020 in Lebanon. But alas, SA is no ordinary country, so life goes on.

In August 2020, after Lebanon suffered a deadly warehouse explosion that killed at least 160 people and wounded thousands, prime minister Hassan Diab announced the mass resignation of his cabinet.

However, three weeks after the deaths of about 350 people during mayhem that erupted in parts of KwaZulu-Natal and Gauteng, SA’s intelligence, police and defence ministers are not only still in their jobs but the incumbents are giving accounts of failures that their successors ought to be explaining.

After scrambling for days to get on top of the mayhem, the government appears to have opted to move on to the next crisis. The frequent updates including the exact numbers of the deceased have stopped.

The government and governing party have characterised the mayhem as a failed insurrection and an “attack on our democracy”. This formulation — buttressed by the knowledge that the police were absent from, or looked on at, the crime scene — allows these deaths to be treated differently from the 40-odd victims of the Marikana massacre on August 16 2012, for instance.

In the latter case, after pressure and outrage from civil society and opposition parties a judicial commission of inquiry chaired by retired judge Ian Farlam was set up. The government subsequently spent months fudging the terms of reference of the commission, resulting in no adverse findings being made against any of the then cabinet members.

Curiously, some Marikana miners, who were protesting for better wages, were charged, as well as a handful of police, some of whom were duly prosecuted. Families of the victims (including the police, private security and miners) have yet to receive either justice or the proceeds of the financial settlement almost a decade later.

Much effort has been expended trying to explain the cause of the recent mayhem and how to provide socioeconomic relief measures. On the socioeconomic response to the crisis, the government’s instinct has been refreshingly correct: first, unlike in the early phases of the Covid-19 pandemic, the government’s response has been swift thanks to better-than-expected tax revenues; and second, it has shown willingness to listen to those directly affected by the mayhem.

Consequently, help is on the way to households in the form of the special R350 relief of distress grant — a grant for those not receiving any of the various social grants — until March 2022, and uninsured businesses are set to receive some relief too.

On the root causes of the mayhem, the analysis has been two-fold: first, the dominant narrative has been to characterise the July events as an attempted insurrection and a simple law-and-order issue; and second, to attribute the mayhem to growing poverty and hunger, inequality and unemployment.

Like the former explanation, the latter is quite convenient in that it excuses the governing party from sharing in the blame. According to this logic, today’s inequality, poverty and unemployment are a result of the apartheid legacy, not the actions of the governing party or, more specifically, the effect of the party’s policies, implemented by successive postapartheid administrations over the past 27 years.

Narrowing the mayhem down to an attempted insurrection attempts to locate the problem outside the governing party. This approach allows the party to discredit the other sub-theory that the mayhem had little, if anything, to do with the incarceration of its former leader, Jacob Zuma.

However, none of these explanations helps the families find justice and closure. Worse, asking police to investigate their own failures, especially the failure to pick up intelligence and prevent the resultant destruction of lives and property, is sure to yield nothing approximating justice.

So, what is to be done? The SA security cluster ministers could fall on their swords, taking a leaf from Diab’s example. But history tells us that won’t happen. The families of the 350 people who lost their lives deserve to know how their loved ones died, or were killed, and the perpetrators of the mayhem should be arrested and prosecuted.

In theory, at least, the above should be the work of the police. But given that their inaction or “restraint” makes them part of the problem, at least their decisions should be independently reviewed. Such a review could be undertaken by several agencies, including the office of the inspector-general that provides civilian oversight of the intelligence services, including the army, assuming what took place in July was an attempt to cause an insurrection.

Parliament could set up a multiparty ad hoc committee to look into what caused those events. A similar exercise is under way in the US, where an inquiry is probing the January 6 storming of Capitol Hill by supporters of former president Donald Trump. But the chance of SA’s governing party MPs conducting an honest inquiry that would very likely implicate ANC members is as slim as believing its unity project is under way.

Only an independent judicial commission of inquiry offers the best hope of unvarnished truth for the families of the 350 mainly black African casualties of last month’s mayhem. The terms of reference of this inquiry should be wide enough to include the role of the governing party’s factional battles.

• Dludlu, a former Sowetan editor, is executive for strategy and public affairs at the Small Business Institute.

Liquidation numbers corroborate the sad story of a fragile segment that is supposed to generate 90% of all jobs by 2030 (according to the National ...
Opinion
11 months ago

JOHN DLUDLU: ANC faces conundrum of saving face or uniting the party at all costs