Tshepo Mahloele, chairman of Arena Holdings, is being challenged by critics about all sorts of issues 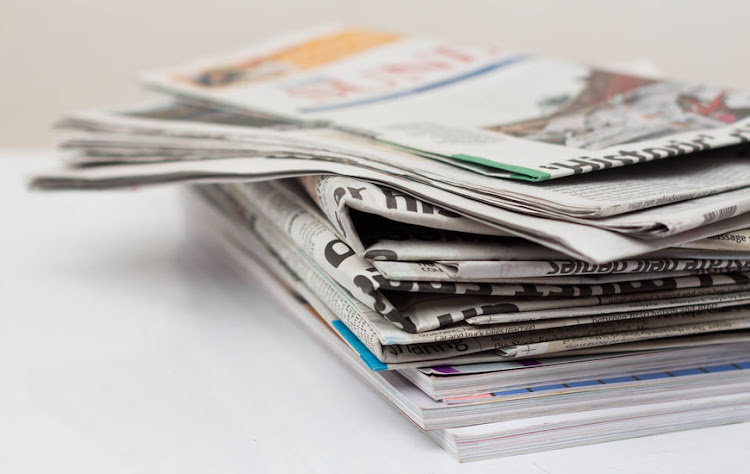 If I ever had the chance to advise a rich businessman about to buy a newspaper company, I would tell him to stop. Newspapers are best run by publishers in moth-eaten jerseys and smudged glasses.

This is no place for a gentleman, I would say. The people inside this building are an ungracious mob. They’ll hate you merely for paying them on time.

Watching my boss, Tshepo Mahloele, chairman of Arena Holdings and founder of Harith, become collateral damage in the few days since it was announced that he is joint lead in a consortium poised to get SAA flying again, I’d love to be able to tell him “See? I told you”.

Too late. And now his problems are my problems. He is being roughed up by rival media and as he owns newspapers he can’t respond without looking like a schmuck. His money is tainted,  they say. He can’t afford SAA; he’s part of an ANC old-boys network? Is he a crook?

That’s the insinuation left hanging in the final report of the commission of inquiry into the Public Investment Corporation (PIC), Mahloele’s former employer. Did he enrich himself through a series of complex financial manoeuvrings, as alleged by Bantu Holomisa?

Or has he been cruelly left dangling by the report? Found guilty of nothing, but nonetheless waiting for the PIC and its client, the Government Employees Pension Fund (GEPF) to investigate, as required by the commission “that all monies due to both parties have been paid and properly accounted for; to determine whether any monies due to overcharging or any other malpractice should be recovered”.

In other words, would the PIC and the GEPF please investigate themselves? Early last year the commission gave them six months to do the work. So far, nothing. I don’t have information the commission didn’t have and I’m as confused as they were.

But life’s not fair. Over at the department of public enterprises, Pravin Gordhan has dodged every bullet fired his way in his fight to “save” SAA. He’s still standing because he knows every twist and bend of the political rivers he swims in.

My boss, on the other hand, doesn’t have a clue for politics. I think he thought there’d be wild rejoicing at SAA being taken off the fiscus, which is what he and former Comair and kulula boss Gidon Novick are promising once their due diligence is done.

Instead, it’s a war out there. People are angry with Gordhan, others with the president. The left is incensed about privatisation. Whole factions are forming in the ANC that believe there are people who will throw their own money at SAA and still leave the state in control of it.

Journalists, rightly angered by state capture, are all over Mahloele’s reputation, questioning his bona fides. They have to do this, I understand that. The record is what it is and he is poised to take control of a broken but once huge state asset.

Can he raise the promised R3bn for SAA? No idea, but he raised R1bn in six months to buy a newspaper company. He likes big brands like the Sunday Times but SAA is something else entirely. Everyone knows how to save it. Everyone knows the deal’s a stitch-up. Everyone knows state capture is still going on. If the deal doesn’t work, he’ll find another one.

Mahloele made his big money in Capitec, as one of the people who put together a BEE consortium to buy 10% of the bank in 2007 at R32 a share — no discount — with a R300m loan from the Industrial Development Corporation. In 2012 the consortium sold half its Capitec stake to the PIC to pay back the debt.

Since then Mahloele has been quietly buying out other consortium members and, through another of his companies, Lebashe, now controls almost 7% of Capitec with the help of financing from Investec and Absa. This week the Capitec share hovers around R1,640 and its market capitalisation is almost R190bn. For the doubters, 7% of that is serious money.

In many ways though, he is an innocent. He pays his debts, for one. And among my jobs I’m his adviser on editorial matters. As such, he’ll sometimes ask me if he might call a reporter about an article he’s enjoyed. I’ve had to explain it isn’t editorial interference to congratulate people.

But he learnt his finance at RMB and it can get complicated. The PIC commission admits it was confused. Its Harith chapter starts with Holomisa: “One of the most difficult tasks regarding dealing with the type of corruption that is alleged to have happened at the PIC is the sophisticated nature of the transactions. Corruption can come in two forms, legal and illegal corruption....”

The commission agrees. “These words resonate ... The layering of legal entities ... can make finding the substance, and not form, of a transaction or series of transactions complex and quite perplexing.”

But if the commission was perplexed, why not call in experts? Why ask the PIC and GEPF to probe themselves? Mahloele says he’s had two independent reviews done, including by Terry Motau, the lawyer who exposed the VBS fraud. They clear him but they’re no good because he paid for them.

A big issue is fees. “The fees charged by [Harith] appear punitive: management fees, advisory fees, transaction fees, costs of covering [Harith] operating expenses, incentive fees from 2015 on returns in excess of 8% per annum and a poison pill termination clause,”  says the commission.

In February though, the SA Venture Capital and Private Equity Association (Savca) found no fault with Harith. An investigating committee found that “the legal and fee structures set out in the fund terms are in line with industry standards”. I don’t know how high that bar might be.

The Harith fund fees were 1.75%-2% management fees, plus an incentive structure where it would earn 20% of all returns higher than 8% in US dollars, the funding currency. That means investors in the funds only start paying incentive fees after they get, in cash, annualised, the minimum hurdle return rate (8% in this case) in dollars. Neither fund has paid incentives yet but returns on the second fund are, right now, just huge.

Mahloele’s also accused of selling a Pretoria house to former Eskom boss Brian Molefe at a suspiciously big discount in 2016. He bought the house in the Cornwall Hills estate in 2007 for R6.8m with an Absa bond. The Reserve Bank governor also lives there. So did Molefe. Around 2013 he decided to sell. He was divorcing and the agent said he could get R17m for it, though a valuation from Absa in late 2015 suggested R11m. There was a R14m offer but no actual money.

Eventually he took the house off the market. In 2015 or 2016 Molefe offered him R10m. By then he was living alone and had met a woman he was to marry who didn’t want to live there. Last October Molefe sold the same house for R13.5m, having added a tennis court and other features.

Last week a newspaper carried a story headlined “Takatso Boss controls KZN purses”. Here was more “evidence” against Mahloele. Except it wasn’t. Takatso is the consortium Mahloele and Novick have formed to take SAA. The story about the “boss” was nothing of the sort — merely a board member of Harith, nominated by the PIC, which owns a 30% stake in it.

If this is all a cautionary tale it might be about flying too high and too close to public funds and, possibly, about being black at the same time. It may also be the start of a story about new SA wealth that will be around for a long time. Mahloele says he’s “building a balance sheet”.

We will have to wait for the PIC and GEPF to do their jobs. It’s a torture. I’ve never felt sorry for any of the many owners this company has had in the 24 years I’ve worked for it. Each one has left it richer and the rest of us poorer. But this one has his own skin in the game. It’s a rare thing.

PETER BRUCE: Screw it, let’s jump left, and do the time warp

The government is making impractical ideological decisions, and with great arrogance
Opinion
1 month ago

SA’s vaccine rollout has been a spectacular mess, and Zweli Mkhize is going to blame someone else
Opinion
1 month ago