When one side of America deems the other illegitimate, it makes compromise and working together impossible at a fundamental level 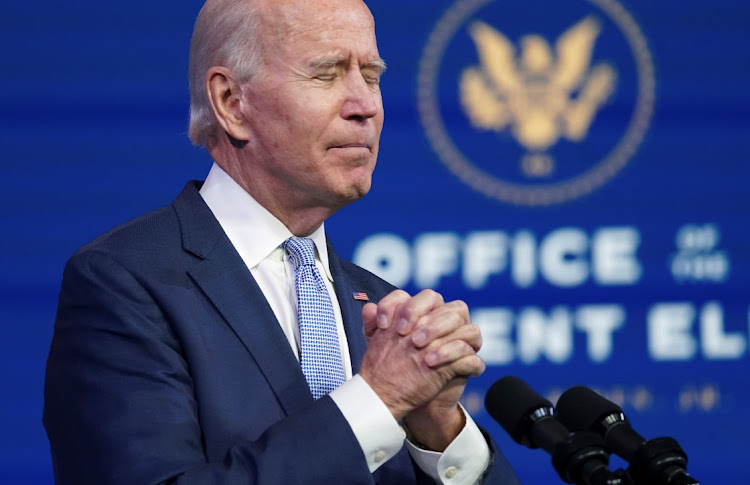 US President-elect Joe Biden addresses the protests in and around the US Capitol in Washington, January 6 2021. Picture: REUTERS/KEVIN LAMARQUE

Eurasia Group released its top risks for 2021 this week, and just like 2020, the US ranks at the top of the list. Unlike 2020 though, our concerns for the US extend far beyond the calendar year.

Let’s start with a statement that in typical times would be utterly uncontroversial — there was a clear winner in US presidential elections. That winner was Joe Biden. Yet nearly half of all Americans refuse to accept that Biden won the presidency legitimately. As the shameful events at the US capitol this week showed, a smaller set of Americans are even willing to use violence to prove that point.

Democracies depend on widespread faith that the political will of the people is being honoured; it’s been true of every advanced industrial democracy in the post-war era. But the 2020 election and its turbulent aftermath have shown it can no longer be taken for granted in the US. Joe Biden is America’s 46th* president, with that asterisk denoting his perceived illegitimacy in the eyes of millions. And all signs point to this being the new normal of US politics. The era of the “asterisk presidency” is now under way.

Faith in the American political process is not the only thing that has been upended in recent years, as widening inequality has reconfigured traditional voting blocks. Today, the dominant US political divide is between coalitions of college-educated city dwellers and rural voters. Outgoing US President Donald Trump has seized on this divide (and the electoral college that magnifies it) to great effect, yielding a win for him in 2016 and a near-win in 2020.

The US today remains the world’s most powerful country, but a country divided cannot lead others

He has been boosted by a media environment fragmented by the rise of technology, which makes choosing news narratives that reinforce one’s political beliefs easier than ever thanks to social media.

And then there is Trump’s personal politics, one based on stoking divisions. Trump has come to represent the anti-establishment wing of US politics, and his continued political support — evinced by the hostile takeover of the US Capitol on Wednesday — will continue to widen the divides of the country and give air to baseless conspiracy theories.

There are more than enough political opportunists in Washington willing to further the attacks (see the number of GOP members of congress that still opted to challenge Biden’s certification even after having proceedings disrupted). Cries of election “foul” have now moved into the mainstream of US political discourse, and will far outlast Trump on the US political scene.

Unfortunately for president-elect Biden, this is not something he can ignore once he gets sworn into office on January 20. Having a large part of the political opposition not only opposing his policies but actively rejecting his right to put them forward will make it even more difficult for him to achieve progressive ideals, such as a national minimum wage or a new voting rights, to the dismay of many in his Democratic base.

More concerning to the country as a whole, it fundamentally limits him from making good-faith attempts to repair a fraying social safety net — one of the key causes of inequality in US society today — and to undertake the kind of massive stimulus needed to keep the US economy afloat or to revamp US health-care operations while the country remains mired in a once-in-a-century pandemic.

When one side deems the other illegitimate, it makes compromise and working together impossible at a fundamental level. And make no mistake — these are challenges that need broad buy-in from both sides of the political aisle.

While this is primarily a US domestic risk, it has spillover effects on the rest of the world. The US today remains the world’s most powerful country, but a country divided cannot lead others. That means more geopolitical dysfunction abroad, as the US will remain unable to play the role of international mediator that it once did as Washington is split over its foreign policy objectives and how to achieve them.

Just as critically, US allies will hedge away from Washington that they fear could suddenly revert to an “America First” orientation in just four years’ time, and US foes could feel emboldened anticipating the same possibility.

The last weeks and months have not been US democracy’s finest hours. Indeed, it seems that while the US has been busy exporting democracy abroad, it might have forgotten to keep some for itself. Starting on January 20, that will be Biden’s problem to solve. That’s a Herculean task, and why it’s our top risk for the year.

For Donald Trump, claiming that the election is rigged isn’t an excuse — it’s a campaign strategy
Opinion
10 months ago
Next Article