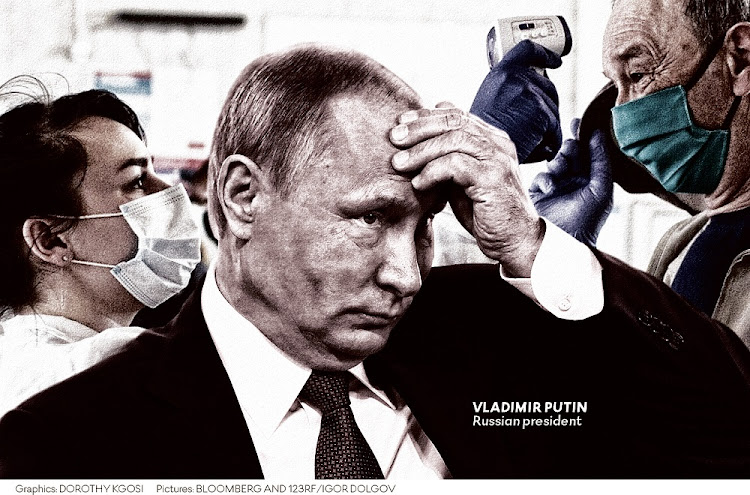 Could the coronavirus pandemic put an end to Russia President Vladimir Putin’s plans to govern for another 12 years after his current term ends in 2024? His latest constitutional manipulations to make this possible have been put on hold. In the face of increasing domestic unpopularity, he might have to abandon this power-grabbing exercise.

The out-of-the-blue pandemic is no doubt a heavy blow to Putin’s leadership ambitions. For the first time since becoming president in 2000, he faces a deadly and ubiquitous enemy that could turn out to be his political nemesis.

Realising that this is a battle he could never win, Putin took strategic precautions aimed at avoiding being blamed for failure and ruining his reputation and leadership aspirations. He quickly went into survival mode — if there was blame to be apportioned, let others be the scapegoats. So he opted out, delegating leadership and responsibility to underlings in the regions and provinces. This was surprising to many coming from the “untouchable” strongman who had previously stripped power from local leaders to concentrate it in his own hands.

As a former KGB agent, Putin saw his role as a guarantor of the country’s security, domestic stability and evolutionary development. However, this is not what he is doing right now. So he risks being called out by the Russian people. It is unlikely that the electorate will forgive him for abdicating his responsibilities in their darkest hour. The first crack in the wall might be a leadership vacuum, paving the way for ambitious underlings to weaken his “vertical power” and set loose a Darwinian struggle for power among competing elites.

What is interesting about Putin’s efforts to wriggle out of his current dilemma is his resort to practices of his Soviet past. Like his hero, Joseph Stalin, at the onset of World War 2, he inexplicably disappeared initially, leaving his leadership role to underlings. But Stalin made a strong reappearance to win the war. The same was true of general Mikhail Kutuzovsky, who pulled a similar act by disappearing into the Russian tundra to avoid a defeat by Napoleon in 1812, setting the scene for a later victory. This time round, however, Putin faces a totally different, invisible enemy, and it is doubtful that he will be able to pull a rabbit out of the hat.

Another tactic he is trying is to obfuscate the truth, an old and typical Russian trait. Putin’s underlings still follow this practice, applying “Potemkinism” (hiding the truth to obscure what is considered undesirable) by filing rosy reports that they know will please the president. The official statistics on the pandemic being churned out by the Kremlin have been exposed as highly questionable, another tactic that will surely backfire.

But old habits die hard. Twenty years ago Putin covered up the sinking of the Kursk submarine, while his predecessors also lied about the Chernobyl nuclear disaster. During the 2014 Sochi winter games, Russian athletes, conniving with officials, were caught red-handed using performance-enhancing drugs. Shooting down a civilian aircraft killing all passengers over Ukraine and murdering political opponents in foreign countries tell a similar story of ruthless lies and obfuscation.

Former president Mikhail Gorbachev introduced glasnost in an effort to reverse the secrecy and opaqueness of the Soviet era. As he told the politburo at the time: “The whole system is penetrated by the spirit of bootlicking, persecution of dissidents, clannishness, window-dressing.” However, the collapse of the Soviet Union brought only temporary respite from this practice; it has re-emerged with a vengeance under Putin.

Russians may indeed ask: is this the same the leader who, against heavy odds, led the daring and successful (albeit illegal) territorial conquests in Georgia, Eastern Ukraine and Crimea; who restored Russian dominance in the Middle East, standing up to Western domination; and restored Russian pride and honour as a global player? Is this the same leader whose prescient strategies and tactics brought miraculous domestic economic recovery and respect abroad?

For most of his reign since 2000, Putin has been extremely lucky, hence his extraordinary success. Former president Boris Yeltsin plucked him from near obscurity and anointed him his successor. At the time he took over the leadership, Russia was practically bankrupt and in chaos. Yeltsin, ailing, incompetent and highly unpopular, was not a hard act to follow. Putin, young, modern and energetic, appealing to Russian patriotism and hankering after global respect, soon emerged as the saviour of the Rodina (motherland) in the eyes of many long-suffering Russians. The cherry on top was that just as he became president the oil price went sky-high, enabling him to salvage Russia’s crippled, almost bankrupt economy.

No doubt Putin’s band of sycophants, his army of siloviki, will work tirelessly to protect him and his legacy. His survival is their survival, and Kremlin propaganda has, therefore, been at full throttle during the crisis. What it is telling us now is that “Russia is more successful in fighting Covid-19 than the West, thanks to its superior health-care system and excellent leadership” (The Economist, May 23). Yet according to the Financial Times the real death toll in Russia is at least 70% higher than what the Kremlin reports, and the New York Times believes it could be almost three times higher than the official tally.

The independent Moscow Times put the death toll at 4,555 and the number of infections at 396,575 by May 30, then the third-highest figure in the world. Reacting to the publication of these statistics abroad, an MP demanded revocation of accreditation of foreign journalists, followed by the Kremlin denouncing what it called an “orchestrated attack on Russia by the West”.

Putin is perennially concerned about his future. Paradoxically, in spite of his high public ratings in the past he tolerated no opposition, using harsh KGB measures to eliminate them. Now his ratings have dropped to historic lows and trust in him has fallen from 60% in March 2018 to 35% at present. No longer can he enchant the Russian public with foreign adventures and anti-Americanism. Repression à la KGB has become his only weapon.

The clearest sign of his perennial paranoia is his haphazard attempted constitutional coup, which would ensconce him as president until 2036. But this could be a bridge too far. His entire future national political strategy is based on “regime security”. Already in place is a formidable network of securocratic measures that will make a popular uprising, even a palace revolution, highly risky and well-nigh impossible. The opposition is emasculated and the mainline media are reduced to Kremlin puppets.

Under Tsars and Soviet dictators, Russians have become used to repression, hence the notion of “ever-suffering” Russians. However, Russia has also modernised in recent decades; the country has opened up to foreign penetration and influences, particularly the internet and the free market. These are forces of change, which implies that reform, if any, will come from inside Russia. Russophobia and demonising Putin, as some in the West are prone to do, will only strengthen his resolve and hold on power. The time is ripe for a diplomatic rethink.

• Olivier is a former SA ambassador to Russia and Kazakhstan and emeritus professor at the University of Pretoria.

With 232,243 cases, Russia now has the second-highest number of cases in the world after the US
World
11 months ago
Next Article