DAVID LEWIS: Just do it! Social compacts rely on far too much consensus

Unrelenting strife and disarray means the government should do what it is elected to do: govern 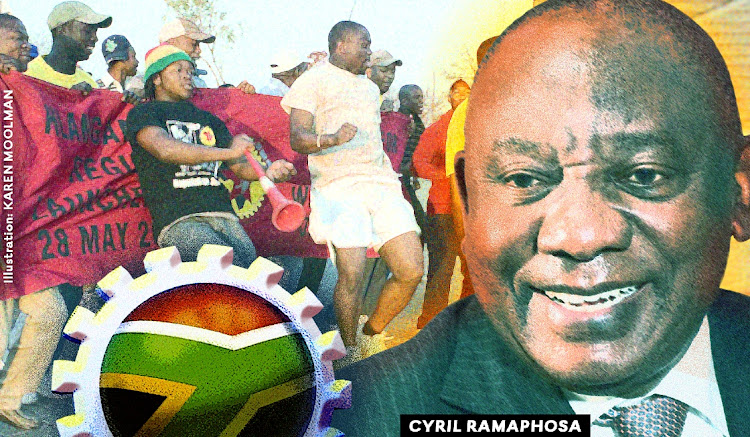 Cyril Ramaphosa’s administration likes the “social compact” approach to governance. In his recent weekly letter to the nation, the president reiterated his call for constructing a “comprehensive” social compact that will reflect “genuine consensus … among all social partners”. Illustration: KAREN MOOLMAN

Familiarity with President Cyril Ramaphosa’s administration reveals that the favoured approach to governance takes the form of a “social compact”.

In his recent weekly letter to the nation, the president reiterated his call for constructing a “comprehensive” social compact that will reflect “genuine consensus … among all social partners”.  This consensus will commit government to “... improve the climate for the private sector to invest, implement state support measures to protect society’s most vulnerable, and spearhead poverty eradication programmes”. In return, the government will expect “complementary actions by business”, including investment targets and, if it is to be a “comprehensive accord”, presumably an agreement to restrain price increases.

In addition, “organised business and labour” must demonstrate “a willingness … to discuss the trade-offs needed to implement growth-enhancing measures”. Here the expectation will be that organised labour will agree to relax selected labour market regulations and moderate wage demands. Labour will then make demands of business for “complementary actions”. Investment commitments by organised business and price restraints will presumably top the list of labour’s demands.

Labour will also make demands of the government — these will focus on the social wage, essentially improvements in the delivery of public goods and services. The social wage demands will be championed by representatives of the “community” principally comprising those millions of unemployed South Africans.

The government sums up its vaulting ambitions as follows: the government commits to creating a safe environment for investment, ensuring efficiency and good governance and guaranteeing wider coverage of the social wage. In return, organised labour agrees to review the labour market to support better economic and enterprise performance, as contained in the National Development Plan. Business commits to increased investment and response to market opportunities in SA and further afield, job protection and creation, reduced income differentials between the lowest and highest paid employees, profit-sharing and inclusion of worker representatives on company boards.

The institutional site for forging this compact will be the National Economic Development & Labour Council (Nedlac), comprising representatives of government and its “social partners” — business, labour and the community. This is a statutory body established precisely for the purpose of achieving agreement between the government and the social partners over important social and economic policy and legislative initiatives.  The legislation establishing Nedlac was one of the first statutes passed by the democratic government, indicative of the centrality the government and its social partners attached to society-wide, negotiated consensus.

Nedlac has been the site of important agreements. I participated on the government’s team forging two such agreements, namely those that produced the Labour Relations Act and the Competition Act, two technically complex and politically contentious statutes. The exchanges were tough but generally conducted in good faith and produced two pieces of legislation that have broadly withstood the test of time. Nedlac’s centrality and public standing in the policy and lawmaking process has subsequently receded, but has recently been partially restored thanks largely to Ramaphosa’s support for social compacting and the appointment of an experienced and highly regarded head.

However, labour and business’s approach to a comprehensive accord is distinctly lukewarm. Business has criticised what it perceives to be the vague generality of Ramaphosa’s proposal and labour has indicated it will not put up wages or labour regulation for discussion.

This is not the first occasion on which a grand social compact has been recommended. In 1996, a Nelson Mandela-appointed commission of inquiry to investigate labour market policy made this a central recommendation (in the interests of full disclosure, I co-chaired the commission, which comprised members from labour, business and academic backgrounds).

Those were heady and optimistic times, but the commission nevertheless felt constrained to underline the institutional and political challenges entailed in formulating and implementing a multipartite policy accord of this scale and complexity, as encapsulated in the following extract from the report:

“In the final analysis the key to the accord is the will of the parties involved. The commission is of the view that SA’s recent history of accord-making is evidence of the considerable political maturity that the social partners bring to the debate ... Likewise the inclusion of Nedlac in the interim constitution was an impressive victory for the principle of participatory economic democracy.”

That was then. And now? Our “history of accord-making” is part of history, replaced by unrelenting strife at every level, from the interpersonal, to internecine conflict in poverty-stricken communities, and sclerosis and discord at every level of our flailing government. Nedlac’s constituent parts are in disarray — one need look no further than the recent Eskom strike to question the good faith of hopelessly fragmented unions or, at the very least, their ability to sustain any agreement struck with employers. Business too is deeply fragmented and as distrustful of the government as its union counterparts.

Nor are the Nedlac participants sufficiently representative to agree, much less sustain, a comprehensive accord of the sort favoured by the government. Gone are the days when union federation Cosatu could credibly represent all of organised labour. Business is represented by the fragile coalition that is Business Unity SA. And community representation has always been more a product of wishful thinking than reality.

And the governance problem remains. We do not have a developmental state, and no amount of glib assertion by mealy-mouthed cabinet ministers will create one. “Developmental” is an ascription earned, not simply proclaimed. Nor do we have a strong state — there are no Xi Jinpings or Chinese communist parties in sight. The only home-grown potential autocrats are rather of the Mobutu variety. And so our policymakers will, whatever name is given to the process, have to secure the broad consent of the governed.

In all humility, I have two pieces of advice for the president:

• Lewis, a former trade unionist, academic, policymaker, regulator and company board member, was a co-founder and director of Corruption Watch.