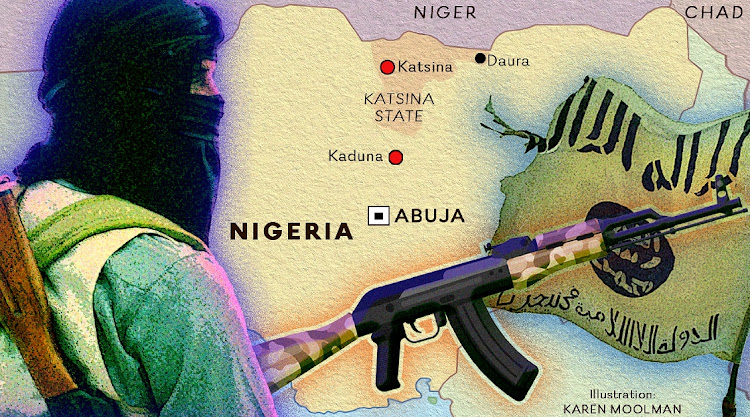 Banditry rooted in northwestern Nigeria has rapidly evolved into a well-armed insurgency — with evidence of growing ties with Boko Haram jihadists. Recent assaults include, attacks on military bases, state institutions, a commuter train, an international airport and on the president’s motorcade. Illustration: KAREN MOOLMAN

Banditry rooted in cattle droving in northwestern Nigeria has rapidly evolved into a well-armed insurgency — with evidence of growing ties with Boko Haram jihadists in the northeast, plus assaults on military bases, state institutions, a commuter train, an international airport and on the president’s motorcade.

The July 12 evening attack on the advance party President Muhammadu Buhari — travelling to attend an Eid celebration in his hometown of Daura, close to the heart of bandit operations in northern Katsina State — by a group of perhaps 300 heavily armed men on motorbikes, left two in the presidential party lightly injured.

Eyewitnesses in a local village en route to Daura where the attack occurred told the BBC it appeared the assault on the advance party of military, police and state security officers, media and protocol officials, was a chance exchange of gunfire rather than a planned ambush, since the group of bandits were returning from a cattle-rustling raid that had left three locals dead.

It seems possible that this was the same group of about 300 on motorbikes — reportedly armed with AK47s and medium machine-guns — that killed an assistant police area commissioner and another officer engaged in an antibanditry operation six days earlier in the Zakka Forest, a mere two and a half hour’s ride away.

A more worrying possibility is that the rebels have now organised themselves into separate but standardised fast-striking motorised infantry units of small battalion size. Government military countermeasures such as aerial bombardments of their forest hideouts have not only proven ineffective but have left civilian casualties, which stoke resentment and fuel sympathy for the rebels.

Sallek Yaks Musa, a security studies specialist at the University of Jos, warned in academic journal The Conversation that “northwest and north-central Nigeria are facing what amounts to an insurgency”, in which bandits operate “a quasi-government” that imposes levies on locals, and that if not checked could assume “the magnitude of the violent extremism experienced in the northeast”.

Enact, an EU-funded research outfit attached to Interpol, warned a year ago that the death in April of Chadian strongman Idriss Déby “has raised concerns that arms trafficking from Chad into neighbouring states such as Nigeria ... could increase. Observers also fear for the future stability of the country’s neighbouring West and Central African states, as Déby’s formidable military response was the bulwark against multiple insurgency forces in the Sahel.”

Typically, arms from the Libyan civil war flow via Chad into Nigeria, where Boko Haram is the main recipient but is also now engaged in selling the arms onwards to bandit gangs.

Federal University of Lafia political science researcher Al Chukwuma Okoli wrote recently that “banditry in Nigeria emerged as an isolated rural phenomenon in the late 2000s”, but by the early 2010s “bandits were largely roving brigands that marauded communities in the hinterlands. They engaged in cattle rustling, highway and market routes robbery, localised village raids and mercenary militancy.”

Musa notes that with the frequency of attacks increasing it became apparent that the bandits were largely Fulani herdsmen speaking either a local Fufulde dialect or a French-inflected dialect, which suggests collaboration with kinsmen across the northern border in Niger and implies that the widening instability could infect both countries.

A common bandit practice, Musa says, is to attack local communities and displace them, opening up new grazing lands — and kidnapping for ransom as a means of financing their operations. Nigeria has become one of the world’s top kidnapping hotspots. Okoli estimates that $18m was paid in ransoms between January 2011 and March 2020 — yet a central state bill criminalising the payment of ransoms faces heavy criticism and may not pass the Senate. businesspeople, schoolchildren and church leaders are popular targets, with 1,436 children abducted between 2020 and 2022 alone.

The displacement tactic appears to be linked not only to ancient contestations between sedentary farmers and migratory herders over access to grazing land, but to opposition by half of Nigeria’s 36 state governors to open grazing corridors for herders.

Meanwhile, Malik Samuel writes for the Institute for Security Studies that Boko Haram’s interest in extending its influence to the northwestern bandits became apparent from the time of an internal “Message to Fulanis” video in 2014, in which late leader Abubakar Shekau was seen “expressing gratitude to fighters in Katsina State and other unspecified locations”.

Okoli writes: “By the late 2010s [the bandits] had developed into organised tribes of semisedentary criminals that maintained pockets of underworld fiefdoms. This was particularly the case in parts of Zamfara and Katsina states in northwestern Nigeria. The transformation of banditry into a sophisticated pattern of organised criminality has been enabled by a number of factors, including its nexus with arms, drugs and jihadi extremism.”

The motorcade attack occurred the same day that an armed formation suspected to be linked to Boko Haram bombed Nigeria’s most fortified prison in a suburb of the capital Abuja, killed one officer and freed about 600 prisoners, including 64 members of the jihadist group that has made much of the northeast ungovernable since it arose two decades ago.

It also came after several other dramatic attacks, including a foiled March 27 attack on Kaduna International Airport in which gunmen apparently tried to seize an aircraft and the terminal building, plus an assault the next day on a commuter train travelling from Abuja to Kaduna by a suspected combined bandit-jihadist force that left at least eight passengers dead and another 150 kidnapped.

Many conspiracy theories have been bandied about by the public — including a discredited one that Buhari himself is aligned with the herders’ aims of reopening old migratory grazing routes because of his ethnic affiliation to them — while the media has speculated about “fifth columnists” in Nigeria’s security forces who sympathise with and enable the rebels to gain ground.

In November 2021 the state declared two named groups and similar bandit outfits to be outlawed terrorists — which enables it to marshal greater forces against the threat. But Musa says the state’s counterstrategies such as criminalisation, dialogue, amnesties, resettlement and deradicalisation and reintegration programmes have largely failed.

Alliances between criminals and terrorists may have been harder to establish if the state had adequate intelligence-gathering and community policing. But Nigeria would need to recruit 30,000 new officers per year over five years to merely catch up to the UN benchmark for an ideal police-to-citizen ratio.

Okoli argues that the state’s protective presence actually has been receding. Complicating inadequate policing is that fully 150,000 of the 371,800 serving officers are detailed as bodyguards for state and corporate VIPs. And, warns Benedicta Akpede in an investigation for Nigerian media research and data analytics company Dataphyte, the $324m a year these private deployments earn is totally missing from the police budget.

“Despite the alarming rate of robberies, kidnappings, insurgencies ... and the growing population in Nigeria,” Akpede writes, in the city of Benin, Nigeria’s fourth-largest, more than “80% of policemen are attached to either private businessmen, multinational companies, corporate organisations [or] government officials”.

With so few resources directed at protecting its people, the Nigerian authorities have lost their grip on what began as a grazing-land dispute, allowing it to evolve into a murderous insurgency.

• Schmidt is a veteran journalist and author.

Tunisia, one of only two lighthouses of evolving democracy in the Arab world, is suffering reversals
Opinion
3 weeks ago

Even if the opposition United Patriotic wins against all odds, it will inherit the forces that has been keeping democracy in check in Angola
Opinion
1 month ago

While there has been some progress, many ageing victims die before seeing their tormenters punished
National
1 month ago
Next Article