Here’s a staggering fact: the standard deviation of aggregate Southern African Customs Union (Sacu) receipts for non-SA member BLNS states (Botswana, Lesotho, Namibia and Eswatini), expressed as a share of mean distributions between 2020 and 2012, was 16%. For context, the excess returns to US equities have a historical variation of 15%.

That degree of variability might be acceptable for hedge fund returns. It is not acceptable for the precarious public finances of the small countries SA partners with in the customs union, for which Sacu receipts can constitute as much 50% of annual state revenue.

This volatility is compounded by the fact that SA makes Sacu distributions to BLNS states based on deeply flawed state forecasts that often require material revisions in subsequent years, accentuating for the unpredictability of BLNS public finances.

The accompanying graph is produced using data from the most recent Sacu annual reports and illustrates the deviations between forecasts and realisations. (Adjustments are made two years after the fact, hence the missing data for the two most recent annual report years.)

To be sure, this volatility is welfare-reducing for the BLNS states, but it harms SA interests as well. Uncertain public finances reduces BLNS creditworthiness, which hampers investment and ultimately stifles growth. This decreases demand for SA goods and reduces the competitiveness of SA’s imports for Sacu. 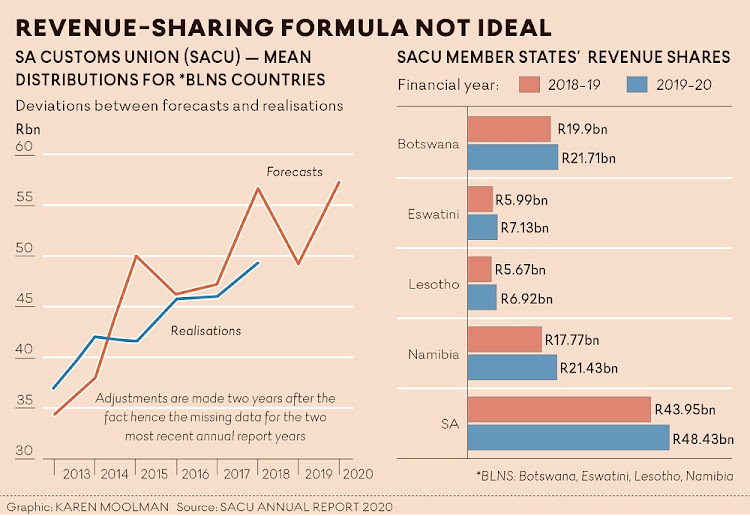 Despite all this, the volatility of Sacu receipts is not the primary issue with the customs union that ought to have been on the agenda for the seventh meeting of Sacu heads of states that took place in Gaborone on June 30. The principal issue with Sacu is that the revenue sharing agreement disincentivises trade-enhancing reform.

The revenue-sharing formula, acceded to by all member states in the 2002 Sacu Agreement, has three principal components governing the distribution of customs, excise and development funds from the common revenue pool.

The excise component is distributed in proportion to state GDP. Finally, the development component can be thought of as simple transfers, fixed as a share of the excise component, distributed in inverse proportion to state income per capita. (The interested reader can delve into the exact provisions and exclusions in Part VII and Annex A of the Sacu 2002 Agreement, which is available online.)

This formula generates at least two incentive frictions that require addressing. First, BLNS states are disincentivised from adopting trade-enhancing reforms if they reduce their share of the customs component of the common revenue pool. When faced with a decision to accept or reject reform that increases net exports to other Sacu states, BLNS governments must factor in the negative effect such otherwise welfare enhancing reforms will have on their annual revenue.

This trade-off is brought into stark relief when one considers that the common revenue pool is shared among the member states, so when one state “improves” their net import position relative to others that state “gains” revenue share under the current revenue sharing regime. This antitrade — and somewhat adversarial — formula is directly at odds with the spirit of increasing ties within the union.

Second, and perhaps most perversely, the internal import formula generates the need for cross-border trade monitoring and regulation, which customs unions are designed to eliminate. This is all too familiar for anyone who has tried to cross one of these state lines with an electronic device that looks even remotely new. Such border controls are cumbersome enough for ordinary citizens, but they can be stifling for small businesses that rely heavily on cross-border trade within the union.

Who could this possibly serve? To be sure, Sacu membership benefits its member states. They all ratified the revenue-sharing agreement. BLNS states are aggregate transfer recipients. SA can better protect strategic markets from global competitors, and at the margin the union encourages purchasing goods from producers within the union rather than those outside it.

That said, the Sacu regime requires reworking. There are regulatory reforms available that make everyone better off — Pareto improvements, defined as a change in allocation that harms no-one and helps at least one party given an initial allocation of goods.

First, in the immediate term changes to the revenue sharing agreement could enhance welfare in the union. Sacu should add penalty weights to the revenue sharing formula to dampen large swings in distributions that accentuate the volatility of BLNS public finances. These weights could be calibrated to historical distributions to ensure they are close to revenue neutral across states.

Sacu should add a component to the customs revenue-sharing formula — common in customs unions elsewhere — that is outward facing and considers member states’ net trading position with countries outside the union. This would temper the adverse incentive to oppose trade-enhancing reform within the union.

Finally, and more speculatively, Sacu should be dramatically more ambitious. The common monetary area all states apart from Botswana are party to presents great opportunity for Sacu to lead the charge towards greater trade integration across the continent. Controlling the free movement of goods and services is a long-standing promise of the union that ought come due soon.

Sacu could lead the way in the greater integration of labour markets across the continent as well. To be sure, free movement of workers has distributional consequences, in particular for low-skilled local workers, but this ought to be weighed against its benefits. Whatever the outcome of this essentially political process though, greater ease of movement for those who tick the right boxes and do so legally is definitely desirable.

Current frictions cause aspiring employees to wait years for approvals they qualify for, and in so doing increase costs and reduce overall productivity. Sacu has great promise. It is time it made good on that promise for the collective prosperity of those who live under the union’s jurisdiction.

• Mashwama is a PhD candidate in financial economics at Harvard University. He is from Eswatini.