BJORN LOMBORG: Going organic might be fashionably green, but it won’t feed the world 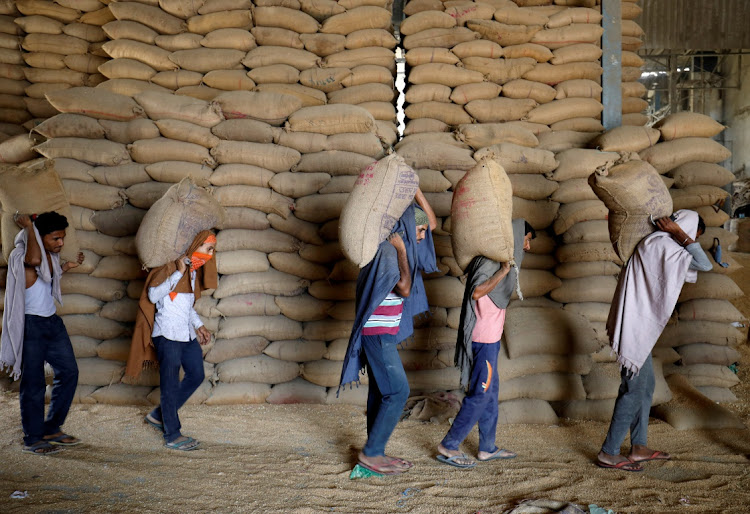 Workers carry sacks of wheat for sifting at a grain mill on the outskirts of Ahmedabad, India, in this May 16 2022. Picture: REUTERS/AMIT DAVE

A global food crisis is looming, so policymakers everywhere need to think hard about how to make food cheaper and more plentiful. That requires making a commitment to producing more fertiliser and better seeds, maximising the potential offered by genetic modification, and abandoning the rich world’s obsession with organics.

Russia’s brutal war in Ukraine is making less food available, because the two nations have been responsible for more than a quarter of global wheat exports and large quantities of barley, maize and vegetable oil. On top of punishing climate policies and the world emerging from the pandemic, prices of fertiliser, energy and transport are soaring, and food prices have climbed 61% over the past two years.

The war has exposed some harsh truths. One is that Europe, which portrays itself as a green energy trailblazer, is highly reliant on Russian gas, especially when the sun is not shining or the wind is not blowing. The war has reaffirmed the basic reality that fossil fuels remain crucial for the majority of global needs. And the emerging food crisis now reveals another harsh truth: organic farming cannot feed the world and could even worsen future crises.

However, research conclusively shows that organic farming produces far less food than conventional farming per hectare. Moreover, organic farming requires farmers to rotate soil out of production for pasture, fallow or cover crops, reducing its effectiveness. In total, organic approaches produce between a quarter and a half less food than conventional, scientific-driven agriculture.

This not only makes organic food more expensive, but means organic farmers would need far more land to feed the same number of people as today — possibly almost twice the area. Given that agriculture uses 40% of Earth’s ice-free land, switching to organics would mean destroying large swathes of nature for less effective production.

The catastrophe unfolding in Sri Lanka provides a sobering lesson. In 2021, the government there enforced a full transition to organic farming and appointed organics gurus as agricultural advisers, including some who claimed dubious links between agricultural chemicals and health problems. Despite extravagant claims that organic methods could produce comparable yields to conventional farming, within months the policy produced nothing but misery, with some food prices quintupling.

Sri Lanka had been self-sufficient in rice production for decades, but tragically has now been forced to import $450m worth of rice. Tea, the nation’s primary export crop and source of foreign exchange, was devastated, with economic losses estimated at $425m. Before the country spiralled downward towards brutal state violence and a popular uprising, the government was forced to offer $200m in compensation to farmers and come up with $149m in subsidies.

Sri Lanka’s organic experiment failed fundamentally because of one simple fact: it does not have enough land to replace synthetic nitrogen fertiliser with animal manure. To shift to organics and keep production it would need five to seven times more manure than the total amount of manure available to it today.

Synthetic nitrogen fertilisers, mostly made with natural gas, are a modern miracle, crucial for feeding the world. Largely thanks to this fertiliser, agricultural outputs tripled in the past half-century as the human population doubled. Artificial fertiliser and modern farming inputs are the reason the number of people working on farms has been slashed in every rich country, freeing people for other productive occupations.

In fact, one dirty secret of organic farming is that in rich countries, the vast majority of existing organic crops depend on imported nitrogen laundered from animal manure, which ultimately comes from fossil fuel fertilisers used on conventional farms. If a country — or the world — were to go entirely organic, nitrogen scarcity quickly becomes disastrous, just like we saw in Sri Lanka. That is why research shows going organic globally can only feed about half the world population. Organic farming will lead to more expensive, scarcer food for fewer people, while gobbling up more nature.

To sustainably feed the world and withstand future global shocks, we need to produce better food cheaper. History shows that the best way to achieve that is by improving seeds, including by using genetic modification, along with expanding the use of fertiliser, pesticides and irrigation. This will allow us to produce more food, curb prices, alleviate hunger and save nature.

Global food prices have dropped from near record highs amid prospects for fresh supplies and fears about a recession, potentially offering some ...
Business
1 month ago

EDITORIAL: Cost of living continues to rise beyond the means of many

Sky-rocketing cost of animal feed - a side effect of the Ukraine war - has jolted agricultural markets and made the cost of a sheep or goat to ...
World
1 month ago
Next Article