Without the powerhouse, the JSE would have provided a dismal 3%-4% annually in rand in the last decade

It has been a torrid 2022 so far. Global markets are more than 20% off their highs in January, inflation is surging and central banks are tightening. The spectre of recession is looming.

The JSE has experienced some respite through higher resource prices and better terms of trade. But the relatively better performance of SA equities disguises a dirty little secret: the lion’s share of the JSE’s performance comes from exposure to one country, China, through resource stocks and Naspers. Without these two factors SA’s equity performance over the past decade would have been almost 80 percentage points lower than that of the JSE all share.

The accompanying charts tell the story. First up are the returns the JSE all share index has delivered over 10 years versus the MSCI all country world index. The chart shows that global stocks have trounced the JSE, delivering 17.8% per annum versus the 11.6% per annum of the JSE, both in rand. 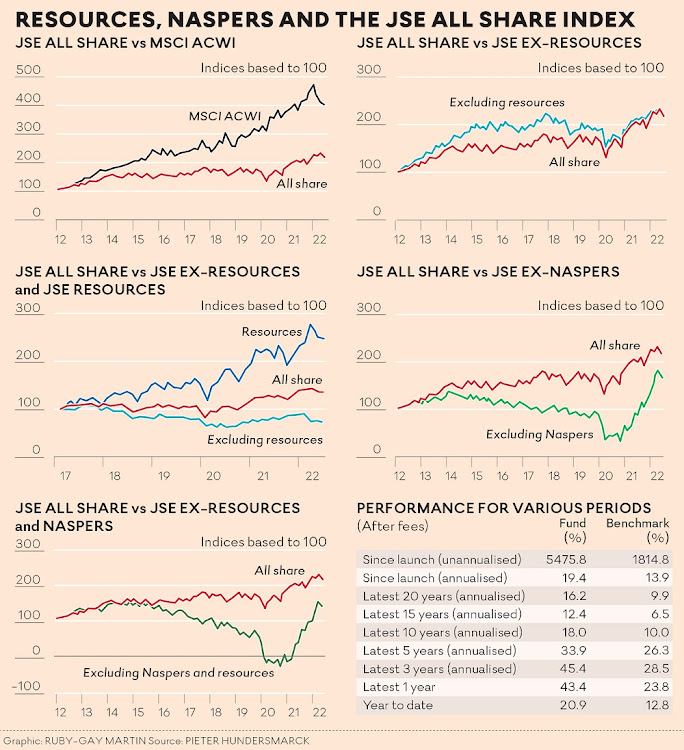 Next up we need to decompose the returns of the JSE. We know mining and resource shares (Sasol, BHP, Anglo, the platinum and gold stocks) play a meaningful role in the index. The second chart repeats the returns of the JSE index over 10 years but this time compares it to the JSE excluding resource stocks. Once excluded it would appear that investors are no worse off without resources in the index.

But this is misleading. The next chart shows the strong performance of resource counters over the past five years. Without resources the JSE all share index would have gone backwards over the last five years of the previous decade, by about 25%.

Resource stocks are not the only China dependants of the JSE. Another large contributor to JSE returns has been the performance of Naspers (Tencent). The next chart shows that without Naspers the returns of the JSE would have been far more pedestrian.

Without resources and Naspers, performance would have been almost 80 percentage points lower than the JSE all share’s over the 10 years.

Deconstructing the JSE performance raises critical issues for investors and asset allocators. Resources are important for the JSE and the currency, and resources are highly dependent on Chinese consumption. For now, even without the Ukrainian conflict the tailwinds behind resources are strong. Chief among these is years of underinvestment due to poorly thought-out policies about environmental, social & governance issues, and a still growing global economy that demands commodities.

Higher commodity prices will be good for SA investors. Just look at the latest returns from one of SA’s top resources funds. Managed for years by the capable Henk Groenewald and Duane Cable, and now by the equally capable Nic Stein and Nic Hops, the Coronation Resources Fund has returned an astonishing 19.4% per annum since inception on March 31 2002. Is that return sensitive to the end point? Of course, it is. But all return calculations are.

But there is a bigger picture here. Who is the buyer of the marginal barrel of oil, ton of coal and ounce of platinum? China, which accounts for more than 40% of all the consumption of the world’s resources. When all the positive returns of the local index have historically been driven by China growing its economy at more than 6% for the past decade, coupled with incredibly accommodative global monetary policies, how do you think the JSE will perform when neither of these conditions hold?

This is extremely worrying. It is already alarming that without China the local market would have provided a dismal 3%-4% per annum in rand over the last 10 years (not to mention dollars). It is even more alarming when we consider the next 10 years.

The second observation is the factual realisation of how concentrated the bets are on the JSE when excluding resources and Naspers. All told, 75% of the capitalisation of the JSE consists of commodity stocks and four companies: a large indebted beer company, an embattled tobacco company, a luxury goods company and a holding company that owns a Chinese internet asset. The number of companies listed on the JSE has shrunk 43% over the past two decades, according to Listcorp. Fishing in these waters is difficult and risky.

Over the past decade and more SA investors have benefited inordinately from Chinese growth, primarily through Naspers but also through exposure to resource stocks. Without them the returns of the JSE would have looked remarkably different.

Investors should understand where their returns have come from, and where they are likely to come from in future. The conclusion can only be one of tighter risk management. Resources are a volatile space, and always have been, especially in a country where the land expropriation bill is on the table, and where the state has persistently failed to provide clarity on the mining charters and taxation.

Naspers, for all its many shortcomings, has been a boon to SA investors. But they are now waking up to how fragile the investment case really was, and how fragile it will look over the next decade.

• Hundersmarck is a portfolio manager at Flagship Asset Management.

BRIAN KANTOR: Naspers and Prosus: may I say I told you so?