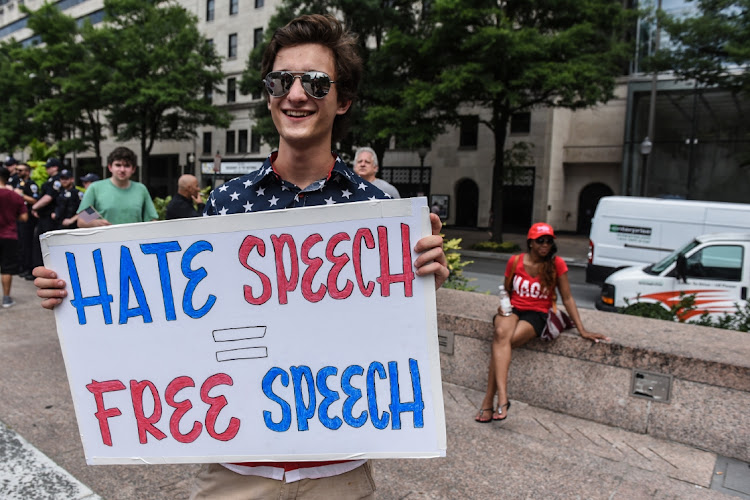 Protesters at a free speech rally on Freedom Plaza in Washington, DC, the US. Picture: STEPHANIE KEITH/GETTY IMAGES

SA has a free media and South Africans have become comfortable airing their views on a range of media, regardless of the nature of the comment. This is due to the protection afforded by the Bill of Rights contained in section 2 of the constitution.

Subsection (2) states: “The right in subsection (1) does not extend to (a) propaganda for war; (b) incitement of imminent violence; or (c) advocacy of hatred that is based on race, ethnicity, gender or religion, and that constitutes incitement to cause harm.”

The drafters of the constitution admirably kept the grounds against free expression laudably narrow. However, the Promotion of Equality & Prevention of Unfair Discrimination Act significantly expanded the prohibitions against free speech.

The apparent explosion of speech that’s been determined to be hate speech has much to do with the effect and reach of social media, which couldn’t have been anticipated when the constitution was enacted.

Politicians have often tried to weaponise race to disarm critics and divert attention from those in society who are the victims of government’s delivery failures. Such allegations ramped up as former president Jacob Zuma’s regime was found to be corrupt and state capture became publicly known.

Penny Sparrow made undeniably racist statements, and she received the anticipated opprobrium and shunning. But facing the full might and deep pockets of the ANC in referring Sparrow at the SA Human Rights Commission and then the Equality Court was excessive.

Adam Catzevelos did not cut a sympathetic figure, but the legal pursuit against him was similarly unnecessary. The fallout for his family was enough: legal declaration as a racist wasn’t necessary.

Vicky Momberg’s outrageous, racist outburst at a police officer was met by a charge, laid by the victim, of crimen injuria, which resulted in her being given three years’ imprisonment. There is a debate to be had about whether injury to a person’s dignity should be a crime.

This won’t prevent us from criticising the substance of derogatory speech on its own merits.

Elite schools now clamp down on free thought and speech as well as pushing dubious training against racism. Public schools are starting to face the same problem.

The FSU SA is particularly concerned about the inhibition of free speech in educational institutions. During key #RhodesMustFall and #FeesMustFall episodes at universities dissenting and challenging voices were shut down by those who acted as self-appointed arbiters of what was right and just. This had and still has a chilling effect on free speech and academic freedom.

An immediate challenge is the implementation of social justice or diversity, equity & inclusion (DEI) in schools through the precepts of critical race theory and critical gender theory. Most of it is presented as the way to deal, controversially, with racism at school.

Elite schools now clamp down on free thought and speech as well as pushing dubious training against racism. State schools are starting to face the same problem.

Black victimhood and white supremacy are employed avowedly to improve race relations. The effect is often that students separate into racially distinct groupings, and white students don’t open their mouths in class for fear of saying something “racist” that they can’t possibly know in advance is “racist”.

Students and teachers are accused of racism; they are shunned and put before disciplinary hearings where they are usually absolved of racism. But it’s often too late — careers are already ruined.

DEI is value-laden, and often opposed by parents. Parents often get to hear about DEI programmes first when their child is on the receiving end of an accusation.

The gender issues being propounded are often biologically incorrect and reflect support for a range of gender identities that are highly contentious and should be up for as wide debate as possible.

FSU SA’s role will be to challenge any limitation on free speech in these circumstance, preferably before they become part of curricula.

Finally, the ANC is now fighting for its very existence; a general election in two years may see it losing power for the first time. The ANC is in panic mode and could well start clamping down on our rights.

Motsoaledi characterises this as “a disturbing and growing trend by some NGOs to sabotage the polycentric and policy laden decisions taken by government by using the courts. This development must be nipped in the bud as soon as possible.” His full statement can be found online. Click here.

He says: “SA is now under the dictatorship of some of the NGOs ... [whose] ultimate aim is to assist in the dislodgement of government of the day from power by all means available.”

His intended coup de grâce is: “The HSF access to the courts is guaranteed in the constitution. However, this should not be a licence to abuse the Bill of Rights by some armchair critics, who have no idea of the sacrifices and deaths of many freedom fighters, while they sat in the comfort of their homes because of the colour of their skin. They now claim to be champions of the human rights of the African people in [the] whole continent.”

These comments suggest a governing party under threat and verging on the authoritarian. The FSU SA and civil society in general can’t allow this to happen.

• Gon is director of the Free Speech Union SA and head of strategic engagement at the SA Institute of Race Relations.

LETTER: Motsoaledi should praise HSF for fighting for Zimbabwe permits

Aaron Motsoaledi should also grant citizenship to the Ndebele component of the 178,000 affected Zimbabweans
Opinion
1 month ago
Next Article