Address the realities of unemployment, not just the numbers

The recent release of the Quarterly Labour Force Survey (QLFS) by Stats SA provides a glimmer of hope in the wake of the Covid-19 pandemic. Since the start of 2022, the number of employed people increased by 370,000 to 14.9-million. At the same time, the number of unemployed people (excluding discouraged work seekers) decreased by 0.8% from the fourth quarter of 2021. The official unemployment rate now stands at 34.5%.

While this is good news, much of the analysis has focused on the headline unemployment rate. This obscures some concerning trends, particularly regarding the continued casualisation of work, and growing precariousness. The headline unemployment ratio also obscures the actual vast number of unemployed people in SA. We seek to unpack some concerning labour market trends that require urgent attention from policymakers and the government.

According to Stats SA, most of the jobs gained in the last quarter were in the formal sector, with the community & social services industry and manufacturing industry making up the majority of new employment. While this is promising, since manufacturing remains the sector the government holds out much hope for in terms of boosting employment and increasing growth in the economy, it is important to consider the kinds of jobs being created and the livelihoods they are able to provide for the majority of working people in SA.

Throughout the postapartheid period, the manufacturing industry has seen an increase in non-standard employment in the form of fixed-term/limited duration, casual and temporary jobs, without adequate work-based legal and social protections. Between 2002 and 2017, fixed-term contracts for women and men in the manufacturing industry increased by 7.68% and 6.23% respectively, while permanent employment decreased by 10.1% and 7.14% for the same period.

Manufacturing is placed at the heart of the formal economy, and yet even this sector is unable to provide new, permanent jobs. While the recent QLFS does not provide information related to casual and temporary jobs in particular, it does however indicate that, in line with the labour market trends of the last two decades, rising precariousness in the SA labour market has persisted in the last year. Between 2021 and 2022, the number of people with contracts of a permanent nature decreased by 719,000, while the number of people in non-standard and precarious work arrangements increased by 488,000.

Further, year-on-year comparisons indicate that the number of unemployed people actually increased by 8.6% (620,000 people) between the first quarters of 2021 and 2022. In addition, working poverty studies suggest many South Africans are unable to meet their basic needs despite living in households where at least one member of the household is employed.

Most concerning, however, are the number of young people recorded to not be in employment, education or training. Despite the government’s 2021 declaration that recovery from the Covid-19 pandemic should focus on young people to achieve an “inclusive and transformed society”, youth unemployment has increased. According to Stats SA the number of youths (aged 15 to 34) who were not in employment, education or training increased from 8,894,400 in the first quarter of 2021 to 9,584,100 in the first quarter of 2022.

While this is unsurprising given the government’s seemingly lacklustre approach to addressing the crisis of employment over the past two decades, it is concerning given that the youth were among the hardest hit by the 1.4-million jobs lost in 2020. Further, these figures suggest we may be further away from addressing the triple crisis of poverty, inequality and unemployment than we were before the Covid-19 pandemic.

The headline unemployment rate, which is a ratio, also obscured the lived realities of large numbers of people. There are now 11.6-million unemployed people in the country — people who would work if they could find a job. The number of discouraged work seekers has risen from 2.3-million in Q1 2021 to 3.8-million in Q1 2022. Another 1.8-million people report being disabled, or too sick to work. Despite the glint of good news in the latest labour force data, this should not distract from the ongoing catastrophe that is SA’s unemployment rate.

The country has pinned its ambitions to reduce poverty and inequality on the expansion of “decent” work, driven by “inclusive growth”, but there is mounting evidence that we have failed dismally to achieve this by any measure. Because our unemployment crisis has been so enduring, we have become inured to its magnitude. It is worth considering that in both the US and the UK (admittedly advanced economies), unemployment is now lower than 4%, while across Sub-Saharan Africa unemployment was 7.7% in 2021. That SA could see a narrow unemployment rate of 40% in the near future is a tragedy of vast proportions.

It is clear from the recent QLFS that the current growth-centred approach is insufficient for sustaining livelihoods amid the multiple crises many South Africans are faced with. Addressing the crisis of employment in SA should be a priority in and of itself, rather than an added benefit from growth, as mainstream policies have reduced it to.

Poverty and inequality persist whether or not the economy is growing. Therefore, if we are to adequately recover from the effects of the Covid-19 pandemic there is a need for policies rooted in the reality of how the economy is experienced by the millions of South Africans struggling to survive in the current climate. Policies removed  from context just won’t cut it.

• The authors are researchers at Wits University’s Southern Centre for Inequality Studies. 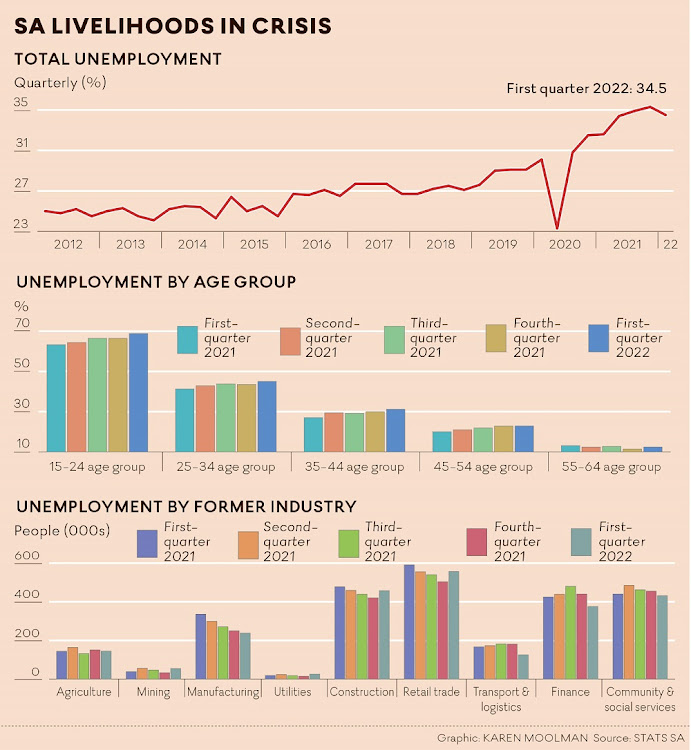 LETTER: SA on the precipice of turmoil

LETTER: SA on the precipice of turmoil