NICHOLAS WOODE-SMITH: Opposition parties must gang up to keep ANC from power 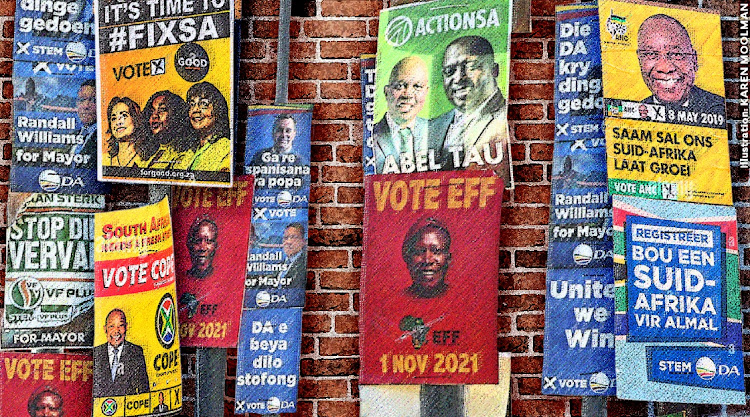 Opposition parties’ plans to go into coalition with the ANC if — or when — it loses its absolute majority in 2024 must be abandoned. Any attempt to push the ANC towards competent governance from within a coalition will just see the smaller partners being subsumed by a more experienced, more dogmatic and less reasonable ANC.

There is a common fiction in SA that there exists a good ANC and a bad ANC. This is a myth. While the ANC is a large party with many factions, personalities and internal conflicts, this does not mean any side of it is good, or at least good enough to form part of a competent and honest coalition government. At least for now.

The track record of ANC governance in SA is one of corruption, bad policy and heinous ideology. The sides of the ANC that are often painted as good are either insanely corrupt while holding somewhat pragmatic policy ideals, or incorruptible with a zealous desire to turn SA into the Soviet Union.

Both are unacceptable. SA deserves a government that is both non-corrupt and ideologically aligned with realistic economics, freedom and accountable democracy. No part of the ANC has demonstrated a commitment to all those requirements. The ANC’s infighting is not over the fate of SA. It is for positions of power and wealth. For tenders and jobs. Not over saving this country.

Even if good people did exist within the ANC, which there surely were in the past, the institution has become so bloated with corruption and bad ideas that anyone who is still a member has to be complicit. They have been subsumed by the chaos. How will smaller parties going into coalition with the ANC react to such temptations of corruption, blackmail and the allure of false promises?

DA federal council chair Helen Zille tweeted on June 12 that until recently she “thought there were some decent people left in the ANC with whom we might, one day, be able to negotiate a new government. That hope is now well and truly dashed. They are all, indeed, the African National Criminals”.

Rather than being a cause of dismay that a leader of the official opposition has lost hope in the governing party, we should be relieved that at least she has come to the realisation that the ANC is unsalvageable.

Politics is constantly changing, and all politicians should be constantly reviewing their options of making SA a better place. A coalition with the ANC would not work now, but things can change. Ironically, those attacking the DA now for a hypothetical scenario are playing more into the ANC’s plan than the DA ever has.

However, as things stand SA needs a clean divorce from the ANC. Any coalition containing it will become contaminated by it. If the DA ever went into coalition with what it perceives to be a good part of the ANC it would soon become a functional limb of that party. This is because the DA has demonstrated the democratic urge to compromise, while the ANC maintains a zealous dogmatism around its entitlement to state capture, cadre deployment, corruption and the pursuit of disastrous policies.

Ganging up and keeping the ANC out of power is the exact strategy smaller parties need to employ in municipal coalition governments. There is no point in ousting the ANC from government if it is going to be invited back into government via a coalition. And there is no point being in a coalition with the ANC when it is guaranteed to ride roughshod over any attempt to govern properly, and to infect the other coalition partners with its bad practices.

Hypothetically, a decent faction may emerge from within the ANC as the party disintegrates. But until such time as it does on its own accord opposition parties cannot prudently construct their strategies around that possibility. Ultimately, working with the ANC in its present form is a betrayal of the voter.

Of all the reasons to vote for an opposition party, the main reason for South Africans now must be to oust the ANC. To then go into coalition with the ANC would signal to the voters that they don’t matter; that only petty politics and power matter. Voters do remember at the polls who betrayed them. And their vote does matter.

The opposition does not need to go into coalition with the ANC. There are plenty of opposition parties that share the essential values of reason and freedom with each other. They can unite for more than just petty politics, because a coalition of good parties will not only become a strong bulwark against the ANC but a united example of what South Africans can do when they come together behind good values.

• Woode-Smith is an economic historian, analyst and author from Cape Town.

ANC has no choice but to renew itself before 2024 polls, Lesufi says

“If we can’t be decisive then that’s the end of everything,” the new ANC Gauteng chair says
Politics
1 month ago