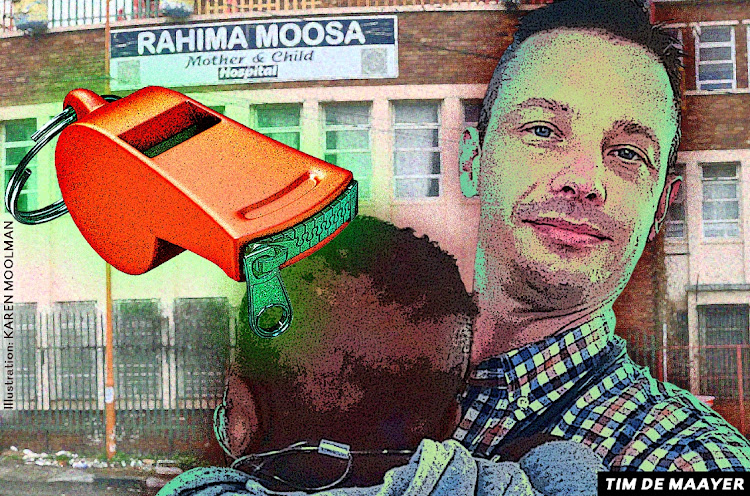 Discrimination against whistleblowers remains commonplace by big-corporates. A recent example was the treatment of paediatrician Tim De Maayer, by the Rahima Moosa Hospital’s CEO, Nozuko Mkabayi. Dr De Maayer dared to make public the appalling conditions at the hospital, putting patients lives at risk. SA has legislation — the Protected Disclosures Act — to protect whistleblowers from victimisation and they must be treated with the respect and gratitude they deserve. Illustration: KAREN MOOLMAN

Few corruption-related issues generate as much public support as the imperative to protect whistleblowers. Yet discrimination against whistleblowers by large employers — and by more sinister, violent elements — remains commonplace.

A particularly offensive recent example was the treatment of paediatrician Tim de Maayer for daring to expose the appalling neglect at Johannesburg’s Rahima Moosa Hospital. For his pains De Maayer was immediately suspended by the hospital’s CEO, Nozuko Mkabayi.

Leave aside that her action was taken against a highly skilled professional and that it was illegal. Surely one would have hoped that her personal ethical code alone, in a working environment where ethical considerations are so important, would have sufficed to restrain her punishing hand. One can only imagine how she deals with her powerless patients’ grievances if this is the way she treats a highly specialised physician.

Because De Maayer prudently made his concerns public, public outrage ensued. He was unreservedly supported by his colleagues and professional bodies. The Human Rights Commission investigated, describing its meeting with the “dismissive” hospital CEO as “painful”.

Public attention to whistleblowing is important. First, it recognises its role in combatting corruption and the sort of gross negligence De Maayer exposed. There is no fighting this sort of conduct without whistleblowing. For its part, corruption mainly occurs by way of collusion between two consenting parties.

While corruption and negligence are certainly not “victimless” offences, the victims and the nature of the crime are not immediately visible — there are no dead bodies (although in the context of a hospital there undoubtedly are) or missing possessions that attest to a crime having been committed. There are rarely casual witnesses either.

For this reason, the detection and prosecution of corruption and wilful negligence usually requires someone sufficiently trusted or sufficiently “invisible” — as with lowly subordinates like the office cleaner or tea person — to have been in the room where the deal was concluded. Or it requires a remorseful or fearful participant in the corrupt arrangement to blow the whistle on his co-conspirators.

Or it requires the insight and diligence of an employee or service provider whose function involves oversight or specialised knowledge of the conduct in question — an auditor, for example, or somebody like De Maayer.

Second, public interest in the protection of whistleblowers evidences appreciation of their extreme vulnerability. The stakes are usually exceptionally high, and the potential consequences of being apprehended are considerable. Those responsible for the conduct in question are usually powerful individuals in the entity concerned, so the incentive to remove a whistleblower is powerful.

Appreciation of the dangers implicit in whistleblowing is confirmed by the media attention accorded to some instances of the punishment meted out to whistleblowers — the assassination of Babita Deokaran, another Gauteng department of health whistleblower, is a recent example. However, publicised cases of whistleblower victimisation represent the tip of an iceberg.

Less extreme methods of whistleblower jeopardy — dismissal from work, social isolation — are relatively commonplace and are seldom brought to public attention. Indeed, the difficulty that victimised whistleblowers experience in finding new employment suggests that even entities that profess to encourage whistleblowing prefer not to employ a known “troublemaker”.

SA has legislation — the Protected Disclosures Act — protecting whistleblowers from workplace victimisation. While it is possible to strengthen this law somewhat, the cold truth is that no amount of legislation is sufficient for protecting whistleblowers. Particularly brazen instances of employment-related detriment, as in the hospital case referred to above, may be caught by the law, but victimisation cases are notoriously difficult to litigate. This is particularly so when, as is inevitably the case, the resources of the employer vastly outweigh those of the prejudiced employee.

More extreme cases of victimisation — physical harm or assassination — are even more difficult to protect against. SA has a witness protection programme, but it appears that this is restricted to potential court witnesses and requires a drastic and unpleasant change in the personal circumstances of the protected individual and their family.

Civil society actors have mounted some interesting initiatives around this issue. The formidable SAA whistleblower Cynthia Stimpel is one of the directors of Whistleblower House, a recent initiative aimed at supporting whistleblowers. The support envisaged includes legal support, psychological support and, funds permitting, even a modest measure of financial support.

The National Anti-Corruption Strategy proposes that the state establish a whistleblower support agency. In the first instance, both business and government should consider providing financial support to an initiative such as Whistleblower House.

The most effective protection for whistleblowers is to treat them with the respect and gratitude they deserve. Can you imagine what an impact it would have made had the CEO of Rahima Moosa Hospital responded to De Maayer’s revelations by calling a meeting of staff at which he was celebrated and thanked for his contribution, rather than being punished?

But having chosen the illegal and unethical path of victimisation of a whistleblower, should the Gauteng department of health not have subjected her to discipline? Instead, MEC Nomathemba Mokgethi issued a vacuous media statement announcing De Maayer’s reinstatement and claiming “the matter has been resolved amicably”, as though her role was to simply mediate a minor disagreement between the hospital CEO and one of her employees.

The MEC’s statement contained no suggestion of an apology to De Maayer and made no mention of disciplinary action against the high-handed, ethically challenged CEO.

The Gauteng department of health constantly thumbs its nose at what I believe are the honest attempts by premier David Makhura to clean up the province’s government and provide decent services to its citizens.

Perhaps the optimal solution would be to send the good doctors who manage the department and its facilities back to the wards of Gauteng’s public hospitals, blighted as they are by their criminal neglect and incompetence.

This way they may better understand the conditions under which De Maayer and his colleagues labour and their patients suffer. I bet they wouldn’t last a week.

• Lewis, a former trade unionist, academic, policymaker, regulator and company board member, was a co-founder and director of Corruption Watch.