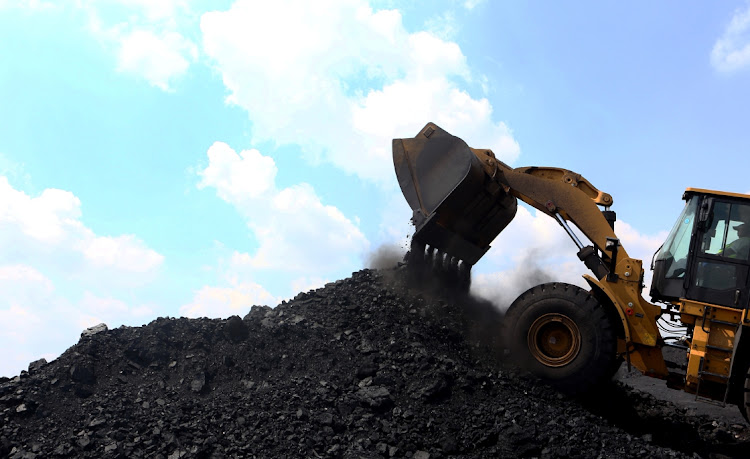 A loader seen moving coal in a mine in Mpumalanga. Picture: MASI LOSI

SA is the 12th-largest emitter of greenhouse gases and the worst sulphur dioxide polluter on the planet — surpassing the combined emissions of the US and China — largely as a result its reliance on coal that produces almost 80% of the country’s electricity. Yet we have heeded the Paris Agreement’s call for countries to set out long-term climate strategies by agreeing to achieve net-zero carbon emissions by 2050. In the face of such an overwhelming reliance on fossil fuels for energy production, just how feasible is that goal?

The deadline is 28 years away, but for the sake of timeline comparison, load-shedding has been with us for 15 years already. The mining industry calculates life of mines in decades, so 28 years is the blink of an eye in terms of their projections.

Mining accounts for 1.2% of the country’s GDP, and coal mining is responsible for the lion’s share of that, so moving away from “dirty power” and replacing it with renewable energy needs to be managed intelligently. That’s where the Just Energy Transition Partnership agreement we signed at COP26 with the EU, Germany, France, the UK and the US to support our climate action goals comes in.

The R131bn pledge to help finance the move to cleaner and renewable energy sources takes the form of grants, concessional loans and investment and risk-sharing instruments, including mobilising private-sector funding. Crucially, in an economy with such a high unemployment rate the funding will be used to ensure coal communities and workers are supported as we aim to help prevent up to 1.5 gigatonnes of emissions over the next 20 years.

That’s a lot of money, but when you consider that Eskom is nearly R400bn in the red, the scale of the task clear. We have to wean ourselves off Eskom while trying to continue to fund Eskom, while at the same develop new green sectors such as electric vehicles, green hydrogen, and train and retrain hundreds of thousands of people who will be affected by cutting our reliance on coal.

The government has a huge part to play in this transition. We can’t expect foreign countries to continue to fund our transition — the financing commitment from the Just Transition Partnership is a nod to our status among the world’s worst greenhouse gas polluters, recognising that our output doesn’t just affect our environment, but the global environment too. The government has indicated its intent to adopt greener solutions — as evidenced by the Presidential Climate Commission — but the stance is compromised somewhat by the mineral resources & energy minister’s assurances to the mining industry that coal still has a major role to play,country which practically it does.

The policy shift to allow independent companies to establish their own renewable power plants and produce up to 100MW of electricity has been embraced, particularly by the mining industry. It looks good on their sustainability reports and helps them continue to operate when Eskom falters. The Renewable Energy Independent Power Producer Procurement Programme (REIPPPP) has procured a total of 6,329MW of renewable energy to date, though just 3,876MW are now connected to the grid. The sixth bid window is now open and is looking to add 2,600MW. So let’s say that, optimistically, all of that sustainable production comes online next year: that’s 8,929MW by 2023, when the country needs just shy of 60,000MW to function. “Thermal” — that is, coal production — is responsible for just over 48,000MW of that production. We still have a long way to go.

Coal miners need to play their part in the transition too, but we can’t simply ask them to stop producing. Indeed, as long as the country relies on Eskom’s fleet of coal-fired plants they’ll need to continue to operate to meet that demand. It’s going to be down to public-private partnerships to introduce initiatives that help coal mines transition to producing alternative energy, while they continue to meet Eskom’s demand. The two areas of operation will equalise over time and renewables will start to become more of a focus as we get the transition right. The land they operate on can then be repurposed for other activities. That’s going to require a REIPPPP-type programme, with incentives.

The 100,000 people employed by the coal mining industry will need support to transition and acquire new skills in the green space. The narrative among employees at coal mines is that their livelihood is being phased out, but that’s because of poor communication on the part of government and the companies that employ them. By properly outlining a plan that will help the country meet the 2050 goal, the government can assure employees of their futures.

The government initially government brooked then pulled back on incentives for households, but private homeowners need enticement when looking to install solar power systems to reduce the load on Eskom, given the current costs involved. Whether it’s encouraging banks to fund these installations at reduced rates or having government intervene directly, there’s plenty of space for households to make an impact in reducing demand.

As private individuals we also need to review our love affair with vehicles. South Africans love their cars — but that’s principally because we don’t have safe and effective mass transport. Families own multiple vehicles that are, more often than not, driven by individuals. Each vehicle contributes to traffic congestion and that increases emissions of CO².

Vehicle manufacturing accounted for 2.6% of SA’s GDP in 2020 — more than double the mining industry’s — due largely to exports. We only produce fossil fuel-burning vehicles though, so as the countries to which those vehicles are exported make moves to reduce emissions by promoting electric vehicles we place that industry in tremendous peril. By not producing electric vehicles for local use — and slapping a ridiculous 25% tax on their import when fossil fuel vehicles are taxed at 18% — the government isn’t providing a single convincing reason for motorists to switch to electric vehicles.

So, faced with a challenge that looks insurmountable, how achievable is that 2050 goal? The coal miners aren’t going to voluntarily put their hands up and say they’re going to shift into other areas. Eskom can’t simply stop producing power to cut greenhouse gas emissions. It’s going to take intelligent, swift action, better communication and clear targets and milestones from the government in the build-up to 2050. Private companies can make their own contributions if they’re given incentives to do so. Individual households can contribute if they’re given the opportunity.

The effects of global warming are increasingly evident, so we’d best start putting serious plans in place to meet the deadline before events such as the flooding in KwaZulu-Natal over the last few months become the norm on a global scale.

Some investors want more detail about the plan to wind down coal mines.
News
2 weeks ago

Since Russia’s invasion of Ukraine, some countries are investing in new oil and gas fields, which will worsen pollution and climate change
World
2 weeks ago
Next Article