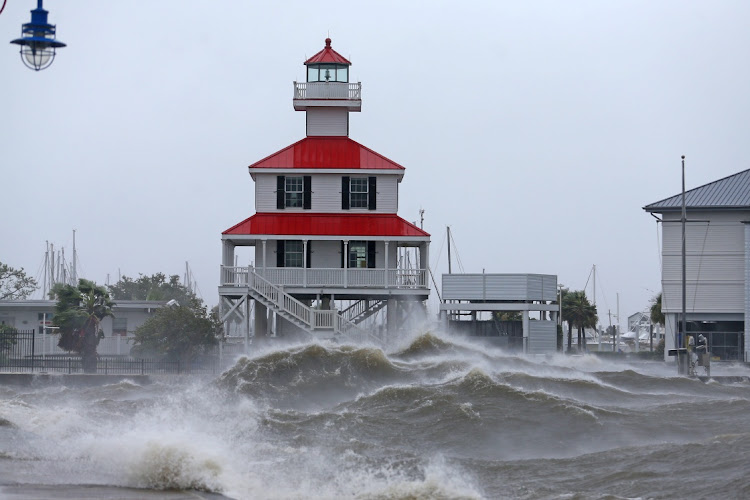 Waves crash against the New Canal Lighthouse on Lake Pontchartrain as the effects of Hurricane Ida begin to be felt in New Orleans, Louisiana, US, in this August 29 2021 file photo. Picture: USA TODAY NETWORK via REUTERS/MICHAEL DEMOCKER

A new UN report broadcasts the disturbing news that the number of global disasters has quintupled since 1970 and will increase by another 40% in coming decades. It finds that more people are affected by disasters than before, and the UN deputy secretary-general warns humanity is “on a spiral of self-destruction”.

Astonishingly, the UN is misusing data, and its approach has been repeatedly shown to be wrong. Its finding makes for great headlines, but it just isn’t grounded in evidence. When the UN analysed the number of disaster events it made a basic error — one I’ve called it out for making before. Essentially it counted all the catastrophes recorded by the most respected international disaster database, showed that they were increasing, and then suggested the planet must be doomed.

The problem is that the documentation of all types of disasters in the 1970s was far patchier than it is today, when anyone with a cellphone can immediately share news of a storm or flood from halfway around the world. That’s why the disaster database’s own experts explicitly warn amateurs not to conclude that an increase in registered disasters equates to more disasters in reality. Reaching such a conclusion “would be incorrect” because the increase really just shows improvements in recording.

You would think the UN would know better, especially when its top bureaucrats are using language that sounds like Armageddon is upon us. Unsurprisingly, climate change is central to the UN agency’s narrative. Its report warns there is a risk of more extreme weather disasters because of global warming, so the acceleration of “climate action” is urgently needed.

Somehow, the huge international organisation has fallen for the same basic fallacy that many of us do when we see more and more weather disasters aired on television. Just because the world is more connected and we see more catastrophic events in our media doesn’t mean climate change is making them more damaging.

So how do we robustly measure whether weather disasters have really become worse? The best approach is not to count the catastrophes, but to look instead at deaths. Major losses of life have been registered pretty consistently over the past century.

The UN report does include a count of “global disaster-related mortality” — yet manages to find that contrary to the international disaster database, deaths are higher than before. It reaches this conclusion by bizarrely including the deaths from Covid-19 in the catastrophes.

Remember, Covid-19 killed more people just in 2020 than all the world’s other catastrophes in the past half century. Lumping these in with deaths from hurricanes and floods inappropriately seems designed to create headlines rather than understanding, especially when the agency is using the findings to argue for an acceleration of climate action.

The truth is that deaths from climate disasters have fallen dramatically because wealthier countries have become far better at protecting their citizens. Research shows this phenomenon consistently across almost all catastrophes, including storms, floods, cold and heat waves. This matters, because by the end of this century there will be more people in harm’s way, and climate change will mean sea levels rise several feet.

One comprehensive study shows that at the beginning of the 21st century about 3.4-million people experienced coastal flooding each year. This causes $11bn in annual damages, along with $13bn to pay for coastal defences. In total, the cost is 0.05% of global GDP. If we do nothing and just keep coastal defences as they are today, vast areas of the planet will be routinely inundated by 2100, with 187-million people flooded and damage totalling $55-trillion annually. That’s more than 5% of global GDP.

But we will obviously adapt, especially because the cost is so low. That means fewer people will be flooded by 2100. The combined cost of adaptation and climate damages is likely to decrease to just 0.008% of GDP. These facts show why it is so important that organisations such as the UN reveal the real picture on disasters.

The UN office for disaster risk reduction has bad form for making unfounded claims. Instead of headline chasing with dodgy maths and frightening language, the UN should be focused on championing the importance of innovation and adaptation, to save more lives.

• Lomborg is president of the Copenhagen Consensus and visiting fellow at Stanford University’s Hoover Institution. His latest book is 'False Alarm: How Climate Change Panic Costs Us Trillions, Hurts the Poor, and Fails to Fix the Planet’.

There are far more serious problems, such as the abject poverty of the majority
Opinion
2 months ago

Governments and climate activists have been talking of impending catastrophe for 50 years, rather than focusing on realistic solutions such as ...
Opinion
4 months ago

If we can innovate the price of low-carbon energy below that generated from fossil fuels, everyone will switch
Opinion
6 months ago
Next Article