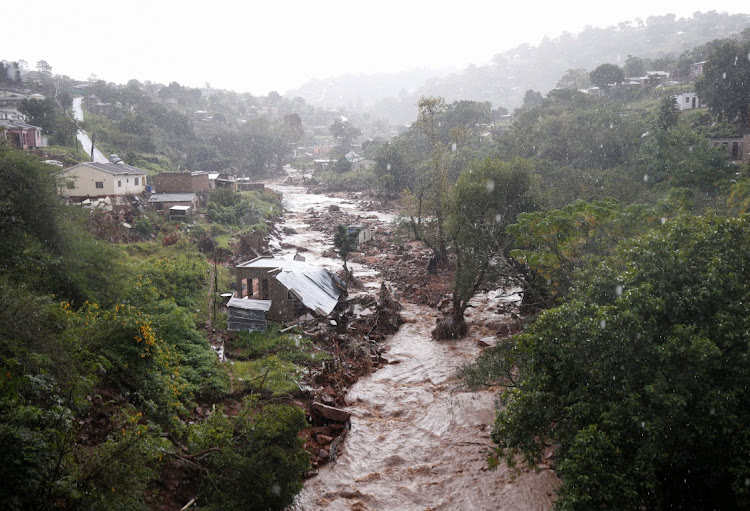 A river runs high after heavy rains, next to homes which were damaged during previous flooding in kwaNdengezi near Durban, KwaZulu-Natal, in this May 22 2022 file photo. Picture: REUTERS/ROGAN WARD

Nelson Mandela contributed significantly to SA’s political emancipation from the apartheid system. However, some have confused this as achieving economic freedom. Wherever one stands on Mandela’s contribution to the new dispensation, there can be no doubt that what is needed in SA is economic justice, including a redistribution of SA’s vast wealth to include those who have been left out.

In February the Presidential Climate Commission launched the draft Just Transition Framework document for comment after several engagements with stakeholders on the critical considerations for achieving a low-carbon economy by 2050. This document intends to provide a logical plan for how the country must change to address climate change and its impact on our society, with justice as a central pillar.

The recent flooding in KwaZulu-Natal forced government to recognise that climate change is real and will wipe away the unprepared. In the past, eThekwini municipality was the leading metropole in implementing adaptation plans. Unfortunately, the province has lagged behind in adaptative capacity. The UN Framework Convention on Climate Change (UNFCCC) defines adaptation as the process of adjusting to actual climate and its effects; human intervention may facilitate adjustment to the expected environment.

SA’s economy has been dependent on coal-fired power stations for decades to power the mineral extractives industry. As such, we’re ranked 13th in the world and first in Africa for our historic carbon emissions, the cause of temperature increase, heavy rainfall and changing weather patterns. Moreover, front-line communities are often the worst affected, but least responsible for the observed changes, and are economically unable to build resilience (not least the ability to cope with the day-to-day realities in the aftermath of a catastrophic climate event).

Adaptation funding has been made available through facilities such as the Green Environment Facility and Green Climate Fund to address the issue of how communities are able to recover from extreme weather events such as the KwaZulu-Natal floods. However, adaptation hasn’t received the same level of funding as mitigation (which refers to the reduction of emissions that cause climate change). Notably, the costs for adaptation are increasing significantly for a developing nation such as SA.

Loss and damage are associated with climate impacts either brought on by slow-onset events or extreme events, as witnessed in developing nations such as SA, which are particularly vulnerable to adverse effects of climate change. But what of the readiness of subnational authorities to respond to disaster? For example, in KwaZulu-Natal the SA Weather Service issued an early warning about the storm, but the province’s political leadership took little to no action.

Suffice to say that the local authorities were less than ready to deal with the emergency that followed. Had the appropriate plans been in place for a timely response we could reasonably have expected a reduction in loss and damage. This was a harsh lesson, and we must be better prepared for a future where extreme weather events will increase. Adverse impacts from tropical cyclones, with related losses and damages, have increased in recent years due to heavy precipitation.

In July 2021 KwaZulu-Natal faced another emergency when disgruntled citizens caused billions of rand in damage to economic infrastructure. The Covid-19 induced disruptions that led to significant increases in inequality, poverty and unemployment and poor service delivery in some regions of the province were the straw that broke the camel’s back. The most recent floods have worsened the situation in an already economically stressed area. How will the economy be revived with limited adaptation funding and a fiscally constrained national and provincial government?

A loss and damage finance facility can solve this. The resources from such a facility will unlock additional support to build back better and support the adaptation and resilience of communities that were worst affected by climate change. Additionally, these funds need to be available at short notice exclusively for developing nations, with an express condition to incorporate energy and climate justice principles, namely respect for human rights, gender equity and equality, transparency and accountability, in their execution.

Next month the 56th session of the UNFCCC subsidiary body meetings (SB56) will take place in Bonn, Germany. The SA Climate Action Network will follow these engagements and advocate with other partners from the continent and the world to develop a loss and damage fund. This issue has received greater attention since COP26, with more developing countries calling on developed nations to do more sooner.

SA’s just transition focuses on decarbonising electricity generation and the agriculture, automotive, and tourism industries. However, besides electricity generation, KwaZulu-Natal contributes significantly to SA’s economy in many other sectors. A loss and damage finance facility should stimulate regions to prioritise more low carbon and climate-resilient interventions. Moreover, building a “new normal” has the potential to generate new jobs and can contribute to the lifting of millions from poverty and unemployment.

The climate crisis will continue to affect those who are least responsible for it, and the flooding in KwaZulu-Natal was a salient example of this. We need justice for communities affected by climate and energy injustice — they need support to be more resilient and adapt to a changing environment. A loss and damage finance facility is not a panacea for all things climate finance-related. However, it will provide peace of mind about the availability of funds for a low carbon economy by mid-century and adequate adaptation finance that will help us to realise economic freedom for the many.

• Lukuko, co-ordinator of the SA Climate Action Network, writes in his capacity as a member of the Climate Ambition to Accountability Project, which receives financial support from the EU.

"We want to assure people that the real time monitoring of the resources and the impact of the fund is very important," said UNDP SA acting resident ...
National
1 month ago
Next Article