MOCHELE NOGE: Do not ignore economic potential of BRT for SA 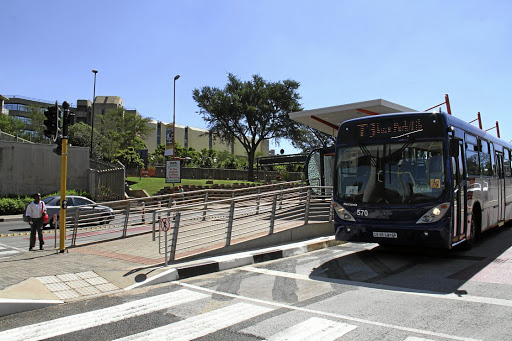 A bus rapid-transit station is shown at the University of Johannesburg in Auckland Park, Johannesburg. Picture: SOWETAN

It is common sense that central to a well-functioning economy is the effective facilitation of the movement and transport of people and goods. There is a positive correlation between efficiency, accessibility, affordability of transport infrastructure, improved services and economic activity.

Mobility options are integral for consumers to access education and healthcare, and for job seekers looking for employment. Increased efficient public transport systems facilitate and make it easier for commuters to move from place to place.

We cannot ignore the effects of high technology-driven solutions that have influenced, and will continue to influence the developmental aspects of society in general and transport systems in particular.

We have witnessed major shifts in the transport system over the last decade or so with the enhancements of internet and mobile technology. Online bookings, mapping of transport itineraries, passenger information displayed on personal mobile devices, introduction of e-hailing companies and similar services are all based on technology and have significantly influenced advancements in the transport sector.

Despite the latter we would be remiss to ignore the often high cost of these offerings, and this is further exacerbated by an environment where consumers desperately need affordable transport options. Against the backdrop of the real need for affordable mobility and the influence of technology on transport, the introduction of the bus rapid transit (BRT) service in SA could be perceived merely as a conventional bus transport service in major metropolitans using exclusive lanes. However, as much as it may be a bus transport service in its core, the service has been based on the establishment of a comprehensive passenger service system, including advanced technology solutions.

Urban bus services have been present around the world for decades, together with other public transport modes such as light rail, trolley buses and urban rail, together with informal options such as the ubiquitous minibus taxis. What is perhaps less obvious is that traditional public transport modes and services have often been developed in isolation rather than in a comprehensively integrated manner. Regrettably, the outcome has been depressed service efficiencies conjoined with suboptimal travel experiences by commuters.

The planning and implementation of the BRT service in SA has been part of the National Public Transport Strategy adopted in 2007 and was intended to develop the ultimate Integrated Public Transport Networks (IPTN) across the country. The aim was to prioritise 12 urban areas, including large metropolitan areas such as Johannesburg, Pretoria and Cape Town, as well as medium-sized cities such as Rustenburg, Polokwane and Mangaung.

The overarching aspect of the strategy is integration, regardless of which mode of transport or type of service is planned for or provided. The endeavour should provide the end user with a seamless and efficient travel experience. In this context the BRT service is simply one type of service that should be considered by a planning authority if it is to fit snugly into a cohesive transport plan. Consequently, the question arises of why there is such focus on BRT projects across the country.

We need to have a more comprehensive appreciation of the fundamentals. Internationally and in SA, the BRT service has been premised on several essential criteria. The latter is strongly characterised by exclusive bus lanes, dominant and enclosed stations in the middle of the roadways along major roads, a cashless fare system, explicit and intensive passenger information system, modern buses providing facilities for differently challenged passengers, physically linked transfer nodes and access to electronic travel information.

Supplementary vital influences are reliability and frequency of the service. Traditionally and conventionally, urban rail has been the most affordable and convenient travel experience for mass mobility, nonetheless two key factors become operative here. Rail infrastructure is heavy and fixed for a long period of time, and is only effective if it is completely operational. Cape Town illustrates this well: its rail service is a shadow of its former self with only 33 operational train sets in 2020 compared to 95 trains sets in 1995, and an average of 153 train trips across the city each day during the week compared to 444 daily train trips in June 2019.

The major component of BRT infrastructure is existing roadway spaces and fixed facilities that are already accommodated, thus saving on an ordinarily onerous investment required to establish the service. This allows for additional flexibility in relation to urban development planning requirements. To the extent that routes are efficiently planned, implemented and managed, BRT routes can transport as many passengers as rail routes with noticeably fewer investment requirements. The technical optics from the perspective of transport economics contend that BRT systems tick many boxes and fit well into many public transport planning scenarios.

In SA, the introduction of BRT systems has also been used to offer informal minibus-taxi operators an opportunity to transform into formal vehicle operating companies and address some of the critical socioeconomic development objectives society has been craving as part of the overall political transformation in the country.

Yet BRT systems continue to face countless challenges in relation to planning and implementation. Several indicators point to the potential for BRT services featuring strongly in the future of public transport development plans for local urban areas. There may be variations we have witnessed in the past decade, but in essence most of the fundamentals will remain unchanged. As such, we cannot ignore the strong economic and fiscal outcomes comparative to other known public transport scenarios.

On this basis the addition of a robust, wide-reaching, and efficient BRT system to our major metropolitans will provide enhanced mobility options to commuters and residents.  Authorities must act without delay to deliver the much needed transformation aimed at advancing enhanced economic activity.

Delegates at the Competition Commission’s inquiry into the passenger transport market paint a picture of a chaotic and poorly managed industry in ...
National
4 years ago

Pessimism hangs over the Rea Vaya bus system, which started with lofty visions of integrating the city, writes Dennis Webster
National
4 years ago
Next Article