ARTHUR KAMP: This is why Reserve Bank’s rates hike is justified 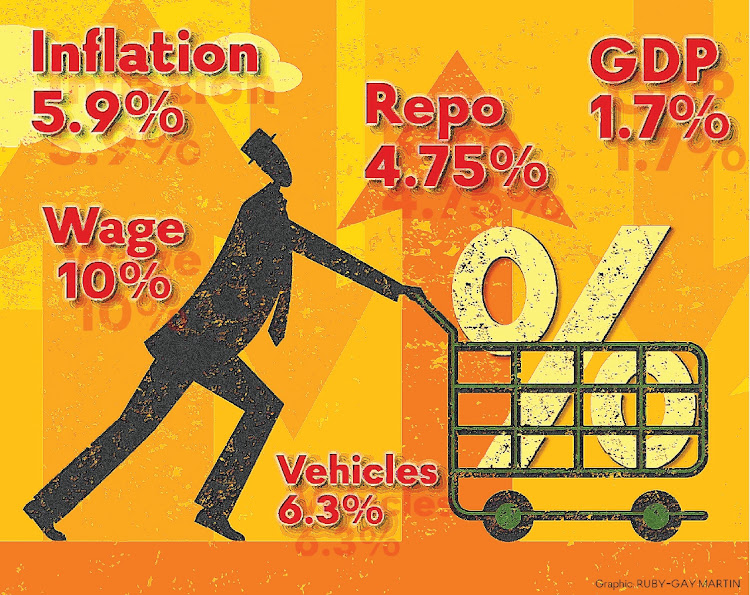 The emergence of second-round inflation effects has prompted the SA Reserve Bank to shift from its “slow and steady” stance favouring front-loading interest rate hikes.

Though this week’s decision to hike the repo rate by 50 basis points will be keenly debated, recent economic developments justify the move.

It is fair to argue that the Bank can do little, if anything, to contain food and fuel price increases, the foremost contributors to rising headline consumer price inflation.

After all, the bounce in oil and soft commodity prices reflects supply disruption, partly due to the Ukraine-Russia war, rather than demand-led inflation.

Producer price inflation data shows pipeline price pressure is considerable at the manufacturing level. And at the retail level, the first signs of significant price increases are emerging. Vehicle prices bounced 1.3% in April 2022, leaving car prices 6.3% higher relative to the same month in 2021.

Global supply chain bottlenecks are partly responsible for this, given disruptions to the production of semiconductors. However, increasing demand played a prominent role too. Passenger car sales, which are interest-sensitive consumer purchases, advanced by double digits in the year to April.

The public sector unions’ demand for a wage increase of 10% is a focal point, since the government expenditure restraint required to return SA’s fiscal position to sustainability relies heavily on curbing the government wage bill. The MPC statement lists a “prudent public debt level” as one of the conditions for anchoring inflation expectations at a suitably low level to “support lower interest rates”. Unsustainable fiscal policies tend to put upward pressure on interest rates.

Earlier and more aggressive US interest rate hikes and tighter global financial market conditions have been accompanied by increased asset price volatility among emerging market economies, including exchange rate weakness against the rampant US dollar.

SA is a small, open economy, and the currency plays a central role in the inflation process. Therefore, the US Federal Reserve’s increasingly “aggressive” monetary policy stance matters and cannot be ignored by the Bank.

There are therefore compelling reasons to respond by front-loading domestic interest rate hikes. However, the question remains whether the Bank is too aggressive considering SA’s incomplete economic recovery and record-high unemployment rate.

The answer is no. Despite cumulative interest rate hikes of 125 basis points since November 2021, the monetary policy stance remains accommodative as the repo rate is below its neutral level. Moreover, the Bank’s quarterly projection model implies an increase in the inflation-adjusted repo rate from -0.9% in 2022 to 1.2% in 2023 and 2% in 2024. Hence, by 2024 the inflation-adjusted repo rate is still slightly below its neutral level, which the Bank estimates at just more than 2%.

With inflation likely to breach the upper end of SA’s inflation target range in the months ahead, the Bank cannot justify a policy interest rate significantly below neutral, especially given the global monetary policy backdrop and upward pressure on inflation expectations and wage demands. Admittedly, the estimated output gap is negative, but it is closing and should turn positive over the medium-term forecast period.

Hence we appear set for significant further interest rate hikes. The Bank’s quarterly projection model suggests, given current information, that the repo rate should increase to 6.21% by end-2023 and 6.74% by end-2024.

The caveat is that economic recovery must continue. Now our growth prospects appear reasonable, though not stellar, provided export commodity prices remain elevated. Real retail sales have recovered to their prepandemic level, buoyed by the increase in purchasing power from commodity price increases. And though consumer spending momentum appears to have slipped in recent months, the renewed improvement in SA’s terms of trade should provide further impetus.

Continued economic expansion requires higher fixed investment spending, job growth and stronger private sector credit extension. The advance in the latter is virtually zero in inflation-adjusted terms — the gains from the commodity price boom must be put to work.

Encouragingly, SA’s total gross operating surplus, a useful proxy for profits, has increased sharply, which should provide the platform for firmer investment and employment growth. In turn, however, continued fiscal consolidation is needed so that the state absorbs fewer resources and frees up savings for use by the private sector.

SA’s monetary policy stance is not responsible for the country’s paltry potential real GDP growth rate of just 1%. Only economic reform can unlock stronger growth. Until then, we must hope the commodity price cycle has legs.

Above-inflation wage drives are likely to cause a rise in unemployment at worst, and slow job growth at best
Opinion
1 month ago

RICARDO SMITH: Strap yourself in — volatility has become the norm

MAMOKETE LIJANE: Economy is not so hot, but the Bank still needs to hike rates

RICARDO SMITH: Strap yourself in — volatility has become the norm

MAMOKETE LIJANE: Economy is not so hot, but the Bank still needs to hike rates