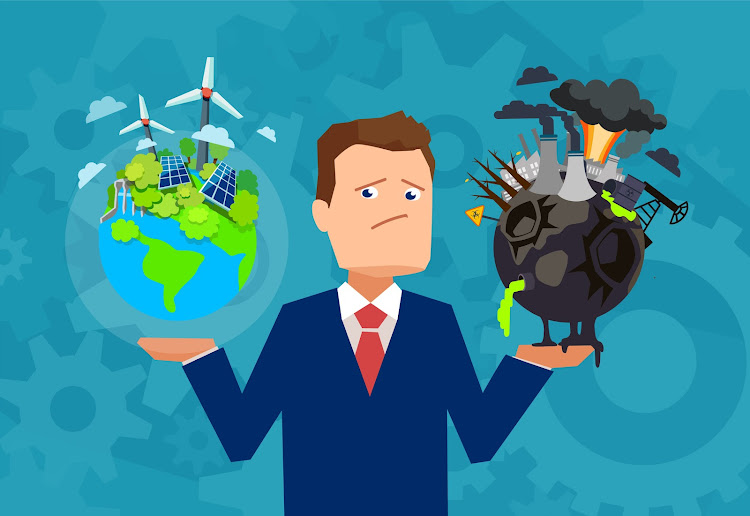 Are we making genuine and sufficient progress on reducing the human risks of climate change? A close look at the progress achieved so far reveals a nuanced story of improving trends and intriguing beginnings. A combination of human ingenuity, changing patterns of production, shifting attitudes and market forces may yet produce positive outcomes.

The story is even more important when we pause to consider how crucial energy is to our wellbeing. It heats and cools our homes and places of work and fuels our transportation on land, water and in the air. It makes our computers and smartphones work. However, according to the Environmental and Energy Study Institute, about 80% of global human energy consumption is derived from fossil fuels — the ones emitting greenhouse gases.

Perhaps the biggest challenge of transitioning our energy production from fossil fuels to cleaner energy sources is that the cost appears to be large. Estimates show the world will have to spend upwards of $50-trillion on alternative energy sources, new forms of energy transmission and networks of electric vehicle charging stations — among others — to achieve the aim of stabilising world temperature change by 2050.

However, spread out over the global GDP through to 2050, $50-trillion represents only about 2% of annual world output. This cost of mitigating climate change must be compared with the cost of not doing so. According to a recent study by Swiss Reinsurance, the total economic cost of not addressing climate change by the middle of this century could amount to 10% of world GDP.

Still, the future is unknown and the challenges are daunting. Because we are utterly reliant on energy for our wellbeing, it is easy to conclude that we cannot change our habits or will be unwilling to make sacrifices to achieve better outcomes for ourselves and future generations, so it’s not worth trying. However, the evidence suggests otherwise.

Consider first that total carbon dioxide emissions in Europe peaked nearly 30 years ago and have been declining since. More recently, that trend is also evident in the US, where emissions topped out around 2005. Even in China, carbon dioxide releases appear to have been slowing in the past five years.

One reason for this trend is efficiency. The carbon intensity of the economy has been dropping in all advanced economies for nearly a half-century. In the US, for example, it took an average of nearly 14 British thermal units (BTUs) to produce $1 of GDP in the early 1970s. Today, the corresponding figure is less than six  BTUs.

Moreover, the carbon intensity of various industries has fallen sharply in recent decades. Industrial activity in the US emits about 25% fewer carbon dioxide particulates today than in the 1970s. Electric power generation has cut carbon emissions by 40%, with half the gains reaped in just the past dozen years.

Historically, there has not been an economic cost to emitting carbon. Making polluters pay for emissions is a powerful way to reduce pollution. Carbon pricing is one answer, and that has been adopted in many countries. Forty national and 25 subnational jurisdictions have put a price on carbon, covering about 15% of global greenhouse-gas emissions. In addition, there are at least 46 carbon-pricing initiatives in various stages of implementation (including in major economies like China and Brazil), and about 25% of global emissions are set to be subject to a carbon pricing.

Another mechanism to internalise emissions costs is “cap and trade” policy, where polluting industries are granted permits to emit greenhouse gases but ceilings (caps) on total emissions are put in place. If a firm wishes to exceed its cap on emissions, it must first buy a permit from a firm that can stay beneath the emissions ceiling. As the cap is gradually lowered, the demand for permits rises while the supply shrinks (given that even efficient firms must operate under more stringent limits), leading to higher permit prices.

Lastly, climate risk transparency is critical for stakeholders to make informed investment decisions. Recent actions by the US Securities & Exchange Commission are leading towards a future where companies will be required to assess and disclose the entirety of their environmental exposure.

So what is one to conclude? Underestimating human adaptability is why past predictions of our demise due to overpopulation, mass starvation or other environmental ruin have proved wrong. Humankind is already taking the first steps to change attitudes, incentives and behaviours. That’s how all great change happens.

Of course, there is much more that can and needs to be done. In future commentaries we will more deeply explore the investment implications of environmental changes.

Only two local companies are among the 3,662 who have signed on to the Net-Zero Standard
Opinion
1 month ago
Next Article