According to attendees at the mining conference, it is quite clear that the term is largely code for let’s keep coal 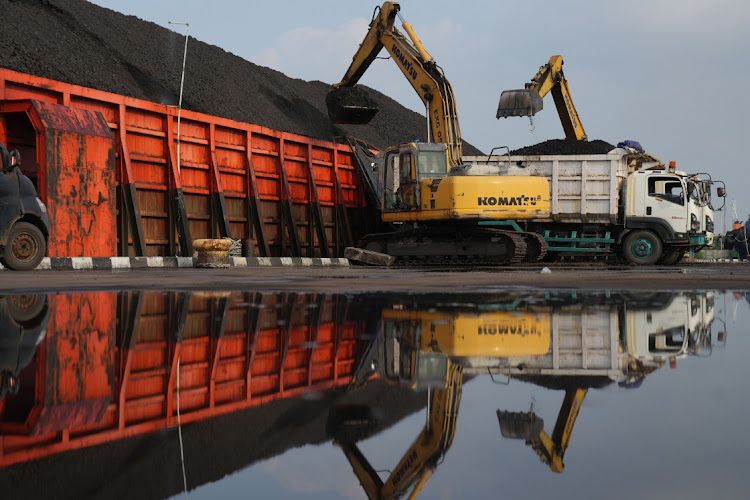 Coal on a barge is loaded onto trucks at Cirebon Port in West Java, Indonesia. File photo: BLOOMBERG/DIMAS ARDIAN

In Johannesburg there is a scourge known as the Parktown Prawn, which is a actually a giant cricket.

Reaching as long as 7cm, the insect comes with a fearsome reputation of being hard to kill and even if successfully squashed, it leaves a black fecal matter that causes stains.

Coal in SA is rather like the Parktown Prawn — hard to kill, dirty when you do, but also somewhat useful as it eats pests such as snails.

So when presidents, miners and lobbyists attending Africa’s biggest mining investment conference earlier this week spoke of a “just energy transition”, it was quite clear that the term is largely code for let’s keep coal.

A just energy transition first entered the lexicon with a formal agreement between SA , the US , Britain, France and Germany last November under which $8.5bn of financing would be mobilised to help SA decarbonise its economy.

SA is the continent’s largest producer and consumer of coal, relying on the polluting fuel for about 80% of its electricity generation. It is also the world’s fourth-largest exporter behind Indonesia, Australia and Russia.

While SA’s political leaders and mining industry remains committed to decarbonising the economy, dig a little deeper and the abiding attachment to coal and the jobs it provides becomes evident.

President Cyril Ramaphosa, a former mining union leader, told the African Mining Indaba in Cape Town that the continent’s resources were vital for energy security, for social and economic development and for cutting poverty.

That all sounds reasonable, but Ramaphosa also used language that seemed to provide significant flexibility in how SA would meet its climate targets.

“It is important as we undertake a just energy transition, we adhere to the principle contained in the UN Framework Convention on Climate Change of common but differentiated responsibilities and capabilities,” he told the event.

What this is likely to mean in practical terms is that countries like SA will want to keep coal for as long as possible and leave the heavy-lifting of getting rid of the fossil fuel to more developed nations that can afford it.

The Minerals Council of SA also appears to be trying to have its cake and eat it, insofar as it remains committed to net-zero emissions by 2050 and describes climate change as an existential issue, but it also wants to keep coal jobs and presumably profits.

Nikisi Lesufi, the council’s senior executive of environment, health and legacy, started a media briefing at the Mining Indaba with a plea to the reporters that they “shouldn’t look at me as schizophrenic.”

He then outlined a position that may not meet the medical definition of schizophrenia but certainly was contradictory in nature, saying it was possible to reduce carbon intensity and protect the coal industry all at the same time.

Much of what the council and its mining members are proposing is good news for climate concerns, such as using renewable energy to power mines and switching to clean vehicles, such as hydrogen-powered dump trucks.

But these largely only address what are termed Scope 1 and 2 emissions, leaving the huge problem for coal of Scope 3 emissions, which is the pollution created when the fuel is burned.

Talking behind the scenes to miners, officials and investors at the conference and it becomes clear that most expect coal-fired power to dominate in SA for an extended period, even though the likelihood of new power plants and mines being developed is getting lower.

SA’s energy dilemma mirrors that for other countries in similar situations.

Coal is likely going to be hard to kill off in countries with vast domestic reserves and rapidly rising energy needs, such as India, Indonesia and even China.

Countries that can exploit domestic reserves and largely control prices for the local market are likely to find that coal remains competitive with cleaner alternatives, and has the added benefit of providing numerous jobs.

Current mining event, which ends on May 12, is hosting a diverse in-person programme
Business
2 weeks ago