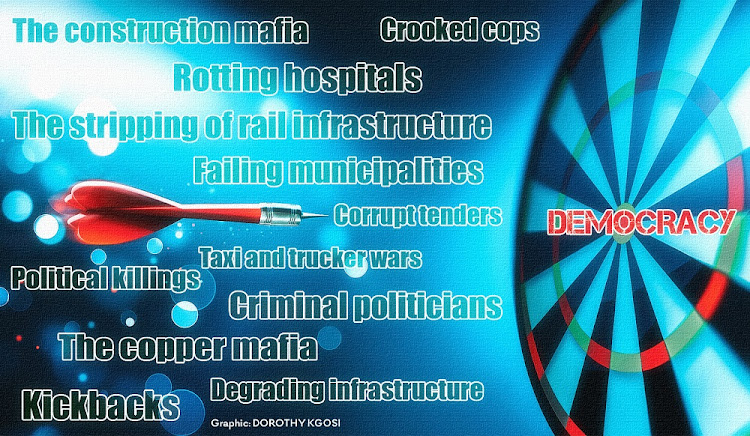 Powerful forces of extraction are threatening to overwhelm our society. This is not the domain of corrupt politicians alone, but bad actors outside government too. For those unable to compete in a modern economy, or structurally locked out by joblessness, gangsterism is now the primary transmission belt to access resources and extract income by quasi-legal, plainly illegal, or violent means.

This gangsterism is the fundamental reckoning for, and a central, very real, present threat to, our democracy; our very own Arab Spring moment in slow motion. It has become infused into our politics. Control of the political and state machinery is now a direct transmission belt to economic advantage.

At the heart of the problem is a complete breakdown in the economy providing a reasonable share of income and opportunity across our population.

With only 14.5-million South Africans employed while 11.7-million are unemployed or discouraged from seeking work, and another 13.6-million not economically active, we are arguably past the point where the economy serves its people. This leaves more than half of South Africans living in poverty and hunger, shut out from economic opportunity. The education system fails to train people for work, and when it does, large numbers still cannot find employment.

To those living on the streets the impoverished are black, while those with assets and income are black and white. Opulent, aggressive materialistic displays are in sickening contrast to the poverty and daily struggles of the poor. They want to know how they will put food in their stomachs, and clothes on their backs. They want hope and solutions. Among the employed, inequities are stark too. Look no further than striking workers at Sibanye demanding to close the remaining R250 a month gap in wages, when their boss is given a R300m pay package. No wonder SA is called the most unequal society on earth.

Look no further than striking workers at Sibanye demanding to close the remaining R250 a month gap in wages, when their boss is given a R300m pay package. No wonder SA is called the most unequal society on earth

Providing practical economic alternatives to those who otherwise resort to increasingly aggressive extractive methods to survive, while prosecuting and punishing those who do, is at the heart of our battle to save SA’s heroic and historic democratic project. In short, defeating extraction as the central organising model of current economic behaviour is central to our political and economic future and choices.

Yes, this is partly about what happens in the governing ANC and the choices it makes, including at its elective conference this December.

But it is also about what happens outside the ANC, and what new political responses emerge. It is equally about what is done by the economic elite and power brokers, black and white. Elites have by and large focused on their immediate vested interests and mostly ignored the growing threat posed by rising economic exclusion and the crisis of joblessness. Now everyone is paying for it as the forces of extraction threaten to overwhelm government, the ANC itself, the economy, business and the society.

So we must ask, what can democrats, business people, unionists, citizens who believe in the rule of law, those who want a constitutional democracy and modern, inclusive economy, do to save our country, provide hope to economically excluded citizens and reverse our descent?

At the simplest level much is being done: humanitarian efforts, feeding schemes, disaster relief, paid internships for youth with businesses, billions from corporates to fund SMEs and the Presidency Employment Stimulus. But we must admit that fundamentally, as a society, we are failing to stem the tide. We must accelerate efforts to create real and credible pathways into the economy for the half of society that is now shut out.

There is broad agreement that the starting point is to grow the economy; we need to create many millions of work opportunities. But not enough is being done to achieve this. There is wide consensus on a broad programme of necessary economic reforms, but at each step implementation is frustrated.

In July 2020, at my UCT lecture, "From a two-speed society to one that works for all", I proposed a 10-point plan to grow an inclusive economy, which included a fiscally neutral unemployment grant, measures to clamp down on the illegal economy, assistance to SMEs and micro businesses, infrastructure investment, modernising the public service via an e-government platform, fixing Eskom’s operations and balance sheet, redesigning the industrialisation architecture, supporting manufacturing and mining, and ending spatial apartheid planning.

The plan targeted the creation of 5-million jobs in a decade and growth of 5% per annum. Other possible measures include zero-based budgeting to redirect expenditure and tax reforms to pay for it, employee share ownership schemes and worker representation on corporate boards to reset the contract between employees and employers, labour and other reforms to stimulate jobs, and private concessions to operate public infrastructure. You may or may not agree with this mix of measures, but if you don’t, we had better come up with practical alternatives that work.

We must act now to reverse the decline. We must provide practical avenues for economic participation, and hope, to those on the streets, or not only will our infrastructure be stripped before our eyes, so will our democracy

What we can’t do is just pay down SA’s debt, smooth fiscal numbers and accept slow growth. We cannot ignore the poor on the one hand, and rising erosive forces of extraction on the other.

Since 2020, our domestic backdrop has only worsened as the forces of extraction have risen in the dangerous vacuum created by a weak state. In fact, this domestic downward spiral has come against the backdrop of fiscal tailwinds for SA from elevated commodity export earnings. This windfall should continue as the world’s largest economies are refitted with commodity rich infrastructure to meet climate change commitments, and provides us with fiscal space to stimulate the economy.

Let us be clear, a reckoning is under way in SA and evidence of its corrosive effects is mounting. We must act now to reverse the decline. We must provide practical avenues for economic participation, and hope, to those on the streets, or not only will our infrastructure be stripped before our eyes, so will our democracy, extracted along with everything else leaving an empty shell, an edifice with nothing supporting it.

Gangsters dressed in Gucci will hold up our flag under the facade, pretending to be democrats while they eat our proud nation’s lunch and flesh. Instead, by providing practical economic pathways and closing off avenues for extraction, we must all fight for the prize of reclaiming and living Nelson Mandela’s dream of a nonracial, constitutional, democratic state and inclusive, modern economy.

• Coleman, a former partner at Goldman Sachs and senior fellow at Yale University’s Jackson Institute, is co-chair of the YES board.

NONTOBEKO HLELA: A new non-aligned movement needed for us to ascend from the veranda

Less red tape, prompt payment by the state and stable electricity supply would make a huge difference
Opinion
2 weeks ago

Leaders were not tasked with efficient use of resources but with racial reconfiguration, writes Brian Kantor
Opinion
3 weeks ago

PETER BRUCE: If you think ANC policy will begin to reflect reality, dream on