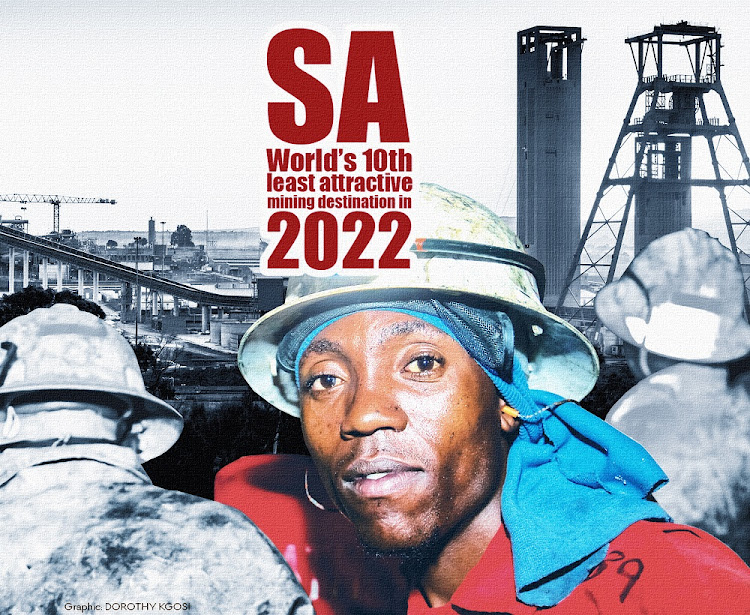 This is a disappointing reflection of the state of mining in the country. However, it is encouraging to note that the government and the industry are working on various measures to address issues affecting the industry. For example, efforts to improve infrastructure (particularly energy supply and rail infrastructure) and initiatives to ensure regulatory certainty.

It is in the interests of the economy for the mining sector to be able to carry on contributing to the fiscus. As we have seen from recent tax collection figures, mining’s contribution is big and has been credited with cushioning some of the blows of the coronavirus pandemic. For instance, in the SA 2022 Budget Review the National Treasury said: “Despite an uneven economic recovery, tax collections over the past 12 months have outperformed expectations due to the strength of mining sector revenue and an upturn in earnings after the 2020 recession,” and “Despite energy and transport constraints, mining production has reached prepandemic levels and expanded by 14.6% in the first three quarters of 2021 compared with the same period in 2020. The sector was largely supported by higher commodity prices and strong demand in the global economy.”

In addition, the Minerals Council SA reported that in 2020, the mining sector contributed R372.9bn to SA’s GDP, and R27.2bn in taxes. Any way you look at it, this is no small contribution. Add to this the value the mining sector brings through direct and indirect employment and skills development, and its ability to attract international investment, and there is no doubt that mining will be expected to continue playing a critical role in the economy for the foreseeable future.

However, if the policy and regulatory challenges are not addressed immediately the long-term future of the industry may be in jeopardy. In terms of infrastructure, much attention has been focused on energy supply constraints. A positive and welcome development in this arena is the increase in the threshold for electricity that can be generated without a generation licence, as contained in schedule 2 to the Electricity Regulation Act.

By increasing the threshold to 100MW the government has facilitated big new investment in independent large scale power generation. Once developed this should increase certainty of supply and take pressure off SA’s national electricity infrastructure. In this regard the Minerals Council reports that its member companies have a pipeline of 3.9GW of potential renewable energy projects worth more than R60bn. When implemented these would substantially contribute to bridging the large electricity supply deficit, diversify the supply, reduce the sector’s carbon footprint and stabilise costs.

The sector has also been grappling with insufficient rail capacity and bottlenecks at ports. Measures to address this, as announced in President Cyril Ramaphosa’s state of the nation address earlier in the year, include the introduction of private sector participants to the Durban and Ngqura container terminals and private parties into operators on the container railway line between Durban and Johannesburg. This is a step in the right direction, but falls short of rail and port needs for companies that export bulk minerals.

Water supply to mines is also in danger of becoming bogged down as a result of deteriorating public water infrastructure. The mining sector has been innovative in dealing with these challenges. Companies are collaborating with one another in finding ways to overcome their common infrastructure constraints and have been working with the government on private-sector participation initiatives to deliver public infrastructure.

Changes in the regulatory environment potentially offer relief to mining companies, at least in theory. One of the most important recent developments was the Gauteng High Court’s September 2021 judgment on the legality of Mining Charter 3, which the court found to be a policy document and not enforceable legislation or subordinate legislation. The court also set aside a number of provisions of Mining Charter 3. The decision comes as a relief to many mining companies, and foreign investors, in that it provides certainty that Mining Charter 3 is policy and not law.

While this decision brings a degree of certainty to the sector, uncertainty unfortunately prevails on the ground. One of the main issues in this regard is that the department of mineral resources & energy’s regional offices often apply inconsistent empowerment requirements. Another spoke in the wheel is the slow and uncertain turnaround time for regulatory approval applications, which remains a deterrent to foreign direct investment in particular. A more efficient and effective regulatory framework and administrative environment is still required, and we are hopeful that a statutory framework will be put in place to which these regulators must comply.

Also moving front and centre are environmental, social & governance (ESG) imperatives, which are critical for long-term sustainability in mining. Companies will be expected to strengthen their ESG capabilities, especially around stakeholder engagement and the effectiveness of their governance structures and transparency of processes. In the SA mining sector ESG has taken a particular focus on climate change, automation and socially distanced remote working, and benefits for mine host communities and the broader population in and around the relevant mine areas.

Mining companies also need to be aware of the growing range of issues that will require stakeholder engagement, including social infrastructure requirements, digital technology and other skills development, environmental impact and health and safety considerations. Of late, there have been a number of court challenges launched by environmental lobby groups as well as disgruntled communities. The importance of this effective, proactive engagement on an ongoing and iterative basis cannot be over-emphasised.

Mining companies have their work cut out as stakeholders step up the pressure and emerging and persisting challenges jostle for attention. The main thing is to keep an eye on the long term: cycles may come and go, but sustainability lasts.

The jobs and foreign exchange earnings provided by the coal industry far exceed the concessional financing currently on offer to switch to ...
Opinion
2 weeks ago

Amid the PCR tests and evening tipples, the country needs to assure potential investors it can keep the lights on and get back on track
Opinion
3 weeks ago
Next Article

CLYDE RUSSELL: With ESG listed as a priority, global miners have little to show ...

EDITORIAL: Far more needs to be done as mining lags in job creation

CLYDE RUSSELL: With ESG listed as a priority, global miners have little to show ...

EDITORIAL: Far more needs to be done as mining lags in job creation