Slump in manufacturing index comes amid series of coronavirus lockdowns in big cities, including Shanghai 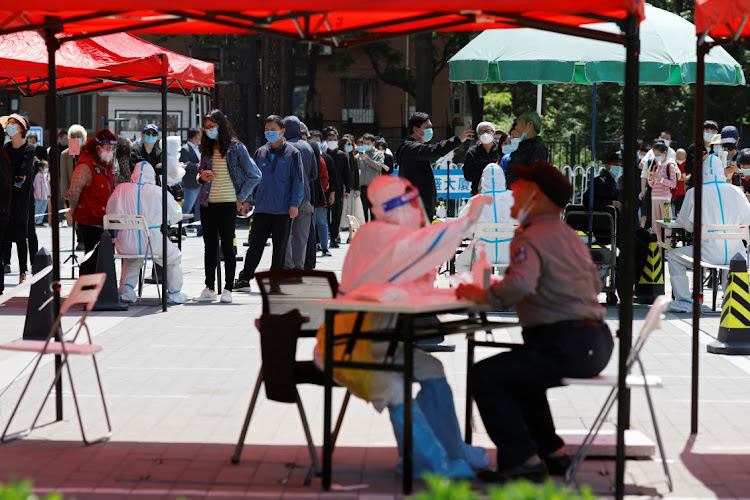 People line up at a makeshift Covid-19 testing site during a mass testing in Beijing, China, May 2 2022. Picture: CARLOS GARCIA RAWLINS/REUTERS

The slump in China’s main manufacturing sentiment index has yet to be fully reflected in prices for metals, which remain well above levels seen during previous bouts of weakness in the industrial sector of the world’s second-largest economy.

The official Purchasing Managers’ Index (PMI) fell to 47.4 points in April, down from 49.5 in March and the weakest outcome since February 2020, China’s National Bureau of Statistics said on Saturday.

It was the second successive month for the index to be below the 50 mark separating growth from contraction, and the soft outcome came amid a series of coronavirus lockdowns in big cities, including Shanghai.

There are also worries that China’s strict zero-Covid policy means more cities will be locked down, including the capital, Beijing, with restrictions lasting for longer than the market had initially expected.

Lockdowns will make it more challenging for China to meet its 5.5% economic growth target for 2022, especially since this quarter appears likely to be weak, with economists saying a negative GDP number is a possibility.

With China's economic worries stacking up, it is perhaps surprising that prices of industrial metals have not retreated more.

No big commodity depends more on Chinese demand than iron ore, almost 70% of global seaborne volumes are shipped to the world's biggest buyer.

The spot price of benchmark 62% iron ore for delivery to north China, as assessed by commodity price reporting agency Argus, ended at $146.50 a tonne on April 29, admittedly before the weekend release of the PMI data.

It has dropped 8.5% from the peak so far this year of $160.30 a tonne on March 8, reached since Russia attacked Ukraine, which before the invasion had been the fourth-biggest shipper of iron ore.

But iron ore is still well above $105.95 a tonne, the price prevailing in October 2021, when China’s PMI last dropped below the 50 level. It is also significantly higher than the $83.15 a tonne from February 2020, when China's PMI plunged as the initial wave of the coronavirus pandemic hit economic activity.

There are other factors that drive iron-ore prices beside the strength of China’s manufacturing sector, but some of these are also looking bearish, namely infrastructure and construction spending.

The current high level of inventories suggest steel mills will have little incentive to buy additional iron ore, especially given still strong spot prices. Instead they may be inclined to bet that prices will decline in line with the current weak activity, rather than hold up in anticipation of still to be delivered stimulus.

Like iron ore, copper prices have remained elevated relative to the weakness in China’s PMIs.

China produces about half of global refined copper, and is the world’s largest importer of the metal.

However, the contract is still well above the prices that prevailed when China’s PMI has dipped into negative territory in recent years.

Certainly, China’s Communist Party leadership is trying to get across the message that the economy will be supported. When the Politburo met on April 30 it pledged support for industries hit by Covid-19 lockdowns, and to boost work on infrastructure and supply chains.

What is lacking is details on what stimulus measures will be implemented, their size and how quickly they will be delivered.

Until this becomes clearer, it seems iron ore and copper may be priced more for the hope of coming stimulus than for signs today of sagging industrial activity.