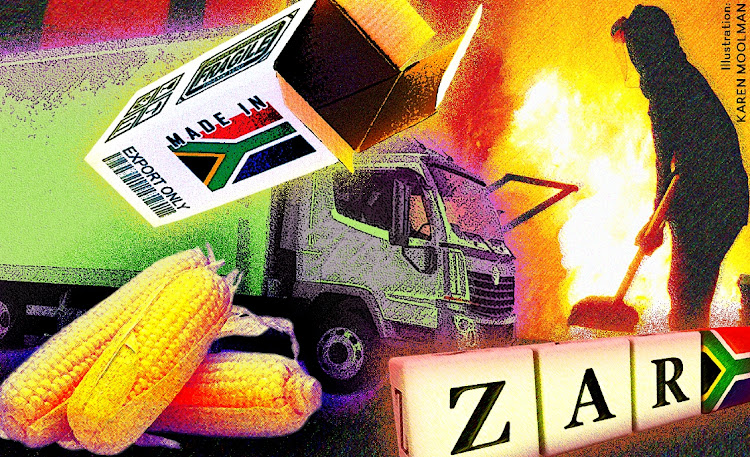 SA’s infrastructure challenges are resulting in lost competitiveness and are having a negative effect on the country’s agricultural exports. The agricultural industry is a big foreign exchange earner, with minerals, vehicles and niche manufacturing, and the sector’s continued competitiveness relies on access to effective and efficient logistics systems.

In 2021, agricultural exports hit a record high of $12.4bn, with products such as SA wine, maize, citrus, nuts, berries, wool, and fruits finding favour among consumers around the world. This performance was achieved despite decaying infrastructure and logistical systems. Calls are now being made for urgent interventions to improve basic infrastructure to restore the competitiveness of SA’s agricultural exports.

Agriculture exports, such as our sought-after citrus, require well-run and efficient rail and ports to compete in the global market. At a point in 2021 citrus growers had to halt harvesting and packing of fruit to help ease congestion at the Durban port. Perishable products simply cannot be left stranded for days, or in some instances weeks, at logjammed terminals.

The ports of Cape Town, Durban, Gqeberha and Ngqura, all managed by parastatal Transnet, are among the worst-performing in the world, according to a 2020 assessment by the World Bank, and the recent floods in KwaZulu-Natal will have made the situation in Durban worse.

SA’s crumbling economic infrastructure was a point of discussion during a recent Inclusive Society Institute (ISI) interaction with the agricultural sector as part of a bigger economic research project to identify a blueprint for accelerated economic growth.

The industry’s concern about the state of railways, ports and road infrastructure echoes that of the mining industry, where companies in the coal and iron ore sectors have reported billions in lost revenue because of their inability to get their product to market.

Transport problems are eroding the profitability of the farming sector, placing its future under threat. The roundtable discussion was told that port inefficiencies cost producers of yellow maize up to R200/ton in additional costs and that rail inefficiencies add a further R150/ton.

Transnet’s challenges were being addressed through a R100bn infrastructure development project at the Durban port, though the status of that in light of the flood damage is now unclear. There are also plans to bring in private-sector participation for ports and railways, and this must be done urgently before lasting damage is done to the agricultural sector and other export industries.

The repair and maintenance of roads must be a priority given the extra costs poor road infrastructure generate for producers. The poor state of roads, particularly dirt roads in rural areas, is a headache for farmers. Trucks carrying heavy goods such as cattle or crops find it difficult to reach markets when road infrastructure disintegrates. In many instances farmers maintain crumbling roads at their own cost.

This not only hits the bottom line of producers, it also results in a deepened trust deficit between the agriculture sector and the government. Farmers are less likely to participate in land reform or other government-led initiatives when they feel let down.

While the failure of infrastructure is arguably the most pressing issue on the table, a conducive environment for investment is equally critical for the future sustainability of the sector. This includes the premium placed by the agriculture sector on political and labour stability.

The industry has warned that any ill-conceived attempts to expropriate productive land will not only undermine agricultural growth and food security, but would also do enormous harm to SA’s reputation as an attractive investment destination.

The minimum wage for farmworkers has also been flagged as an issue, especially as SA farmers do not enjoy the production support that many of their counterparts in other parts of the world do. The sector argues that if wages rise too high, farmworkers will be priced out of the market and farmers may turn to mechanisation to remain competitive.

Compared with many international competitors SA’s agricultural sector does not receive direct support from government. Citing an internal study by Agri SA, a participant in the roundtable discussion said that four of SA’s emerging market counterparts, which provide big budget allocations to support agriculture, experienced average yearly GDP growth of 3.4% over a 10-year period, a rate of growth much higher than SA has been able to achieve in the past decade.

It is vitally important that SA run its agricultural sector optimally, particularly in the context of a rising incidence of weather and climate shocks, as well as international crises such as the war in Europe, which is disrupting logistical supply chains and putting upward pressure on food and fuel prices across the world.

KERRI SAVIN: An innovative green transition can push back unemployment

After Katrina, the US strengthened resilience through risk reduction initiatives. That is what SA must do
Opinion
4 months ago

WANDILE SIHLOBO: On a road to nowhere without better infrastructure

WANDILE SIHLOBO: Animal disease crisis a threat to much more than livestock

PETER BRUCE: Question everything the government tells you, even if it is just ...

JONATHAN COOK: Helping one another restore health to our sickly economy

WANDILE SIHLOBO: Animal disease crisis a threat to much more than livestock

PETER BRUCE: Question everything the government tells you, even if it is just ...

JONATHAN COOK: Helping one another restore health to our sickly economy