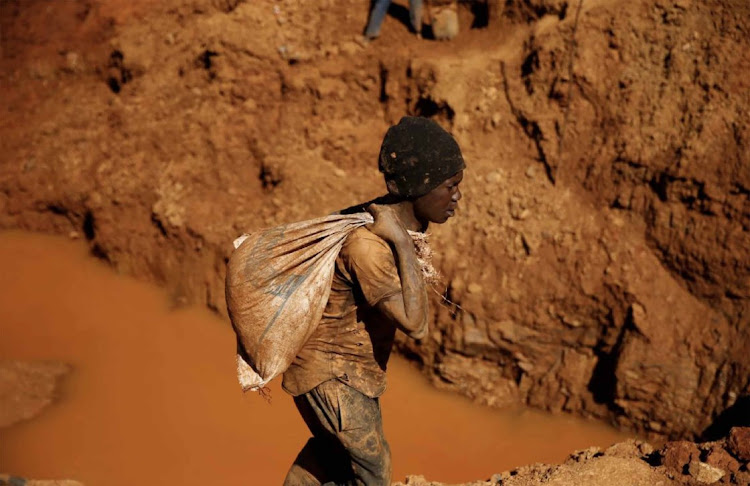 An artisanal gold miner works at an open mine in Mazowe, Zimbabwe, April 5 2018. Picture: PHILIMON BULAWAYO/REUTERS

Artisanal and small-scale gold mining (ASGM) is widely believed to account for up to 20% of newly mined gold production. Because as much as 80% of it takes place outside the formal economy, estimates are unreliable, but the World Bank believes 15-million to 20-million people make their livelihoods directly from ASGM. The sector keeps many people out of poverty, but often at a high social and environmental cost.

The context for ASGM varies. In some cases it represents a traditional livelihood, practised for decades, and is benign. In other places, such as parts of West Africa, it is dominated by in-rush migration, with devastating effects on the environment. The negative social impacts include tragedies such as the recent deaths of 63 people at a makeshift mine in Burkina Faso, gender-based violence and child labour. Some in-migration is driven by poverty, conflict and  climate change; in other cases illegal mining is organised by crime syndicates or armed groups and facilitated by high-level corruption.

Small-scale miners risk falling victim to exploitation by predatory middlemen or crime groups, which cream off a disproportionate share of value. Because they largely exist outside the law, the miners have limited recourse against unfair terms and find it tough to access banking services or investment capital.

There has been no shortage of policy attention on the problems associated with ASGM. In particular, it is the biggest source of mercury emissions globally, and through the Minamata Treaty many governments are trying to wean miners off its use. Moreover, for the last decade governments, led by the Organisation for Economic Co-operation & Development, have sought to block minerals associated with conflict or human rights abuses from mainstream markets.

However, since due diligence standards are high, and rightly so, they often exceed the capacity of small-scale miners to discharge them, diverting their output into illicit channels.  Many African governments say they favour formalising artisanal mining, but then either lack the political will or administrative capacity to do so, or the costs involved deter miners from seeking formalisation.

The World Gold Council has just published a study, “Lessons learned on the interface between large-scale and artisanal and small-scale mining”, that looks at the relationship between these different types of mining — one capital intensive, technically advanced and tightly regulated and heavily taxed; the other labour intensive and generally short term in its horizons. The report outlines how leading gold mining companies are no longer viewing the presence of ASGM principally as  a security challenge but are seeking to work with governments, civil society and supply chain actors to regularise the position of the miners with the objective of improving local development outcomes.

Large-scale miners are decidedly not declaring that they have the answers. After all, the majority of ASGM takes place well away from industrial mines. But as the report shows, many industrial miners are finding ways of working constructively with responsible ASGM groups. Some are, for example, surrendering areas of their concessions that are unsuitable for industrial mining or helping ASGM groups form co-operatives as the foundation for formalisation. In some cases they are urging national governments to facilitate coexistence models.

In other cases industrial miners are helping ASGM groups access mainstream gold markets through supporting their due diligence, and are providing technical support to improve safety standards or to replace mercury amalgamation with better processing methods. In other situations, where geology doesn’t facilitate coexistence, industrial mines have to concentrate on stimulating alternative livelihoods, through local training and procurement initiatives or through improving local agricultural practices, reducing their use of land or supporting would-be entrepreneurs.

It is time for “coalitions of the willing” from  governments, donor institutions, NGOs, industrial and supply chain participants to work together in promoting formalisation for responsible ASGM and to facilitate legal market access. The prize to be won from all these actors working together is reduced poverty for millions of people, better development outcomes, and a more orderly gold market.

• Bickham is senior adviser to the World Gold Council.

The UAE rejects any involvement in illegal practices, while African exporters say tons of their gold goes missing in Dubai every year
Companies
7 months ago

Reforms, digitisation and automation will increase productivity and sustainability
Opinion
1 year ago
Next Article