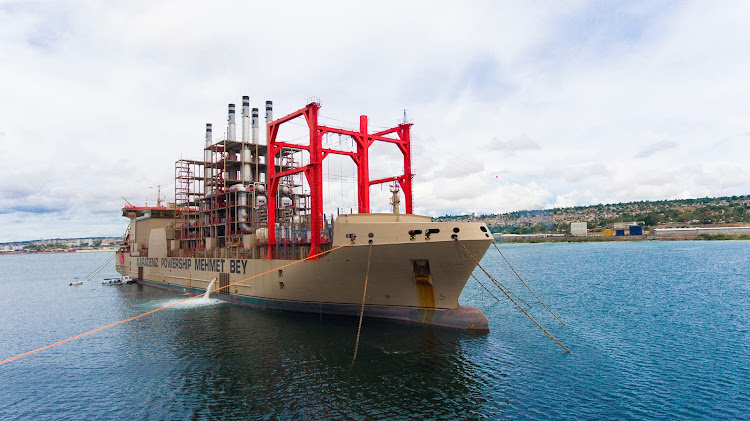 A year ago, Karpowership was named one of the preferred bidders in the department of mineral resources & energy’s Risk Mitigation Independent Power Producer Procurement Programme (RMIPPPP), which aims to plug SA’s 2,000MW to 3,000MW short-term energy supply gap.

At the time, I wrote that “their procurement would be challenged, and rightly so”, and that, “at the very least, delays can be expected, extending and deepening the ‘short-term supply gap’ — meaning worse load-shedding, for longer.” (“Nod to high proportion of gas-to-power ships is fishy”, March 23 2021).

Unfortunately, this is exactly what happened, and the entire programme has become a quagmire as a result. Despite minister Gwede Mantashe stating that the financial close of July 31 2021 was “non-negotiable” due to the “urgency to bring power online”, three extensions have been granted,  the most recent until March 31 2022 which is now scheduled for the end of April. Eskom says the power shortage is now 4,000MW.

Karpowership, which was selected to provide energy from three ships, is alleged to have attempted to undermine legal environmental impact assessment (EIA) processes, and has been referred by the Green Scorpions to the National Prosecuting Authority for possible criminal charges.

Even if Karpowership manages to somehow secure environmental approvals, its power purchase agreements do not make economic sense, meaning it would struggle to comply with the Electricity Regulation Act (ERA).

The department envisages procuring 1,220MW of energy from Karpowership, and then requiring Eskom to buy this power for 20 years. The tender procurement processes so far haven’t assessed “value for money”, which is likely to be a key stumbling block.

The ERA “value for money” stipulations require that new generation capacity projects must result in “a net benefit to the prospective buyer or to government having regard to cost, price, quality, quantity, risk transfer or a combination thereof”. The Karpowership solution does not meet this requirement. The company would charge an emergency price of at least R1.50/kWh for 20 years — though soaring gas prices could push costs even higher.

And even after SA closes its energy supply gap — this should be done in less than five years — the power purchase agreement obliges at least 50% of Karpowership’s capacity to be bought at exorbitant prices for the rest of the 20-year contract. And R1.50/kWh is substantially higher than an average energy mix price for additional firm power — a system that solves for the variability of renewable energy — of about R1/KWh.

The department implemented a successful 6,000MW Renewable Energy Independent Power Producer Procurement Programme (REI4P) from 2011-2014. But in 2015 Eskom executives refused to sign power purchase agreements as required by the ministerial ERA S34(d) determination. These same executives enabled the transfer of coal purchase contracts to cronies connected to state capture under the Zuma presidency. They initiated an anti-renewables and pro-coal public disinformation campaign. This persisted until President Cyril Ramaphosa was appointed and the power purchase agreements were signed in early 2018.

Where the rule of law is in force and the ERA is applied, the department is very capable of rapidly ramping up the renewable energy programme. At the same time, the ERA does not give the department the power to force any IPP project it wants into the system. In 2014 the department issued a determination for 2,500MW of coal-fired power from IPPs. But the winning bidders — which were to add 1,500MW of coal-fired power — could not secure funding even though the power purchase agreements were backed by sovereign guarantees.

If the renewables programme had continued in 2015 and further bid windows had been implemented at an easily achievable rate — instead of pushing uncompetitive coal — we may not have an electricity supply shortfall at all today. By now SA might have been well on the road to a world-class energy transition.

That said, there has been progress recently. On top of the 2018 signing of the outstanding REI4P power purchase agreements, after a delay of six years bidding rounds resumed in 2021, with bid window five yielding 2,583MW of renewable energy commitments, at a weighted average price of just R0.47/kWh. While this is too little, too late, project developers and investors are lined up and able to rapidly accelerate the programme.

Independent and transparent energy system modelling indicates that connecting about 30GW of wind and photovoltaic power to the system by 2030 is the fastest and cheapest way to solve the supply problem, both in the short term and as Eskom’s coal power stations reach the end of their lives.

Modelling shows how additional technologies — covering the peaking, balancing and storage functions — can ensure an affordable and reliable power system as the penetration of wind and solar increases. Proponents of the “baseload” argument use it as a red herring to promote coal and delay the transition.

Since 2014 the deliberate stalling of the REI4P, the failed coal IPP programme, the stillborn gas IPP programme, and now the Karpowership saga, have demonstrates what happens when fossil fuel interests attempt to push techno-economically square pegs through round holes.

• Trollip is a research fellow in energy at the University of Cape Town​’s Global Risk Governance Programme.

New scientific report says world will have to cut global emissions by 45% before the end of this decade to keep global warming within the ...
National
4 months ago

Only immediate, ambitious climate action will keep global temperatures from rising 1.5°C beyond the pre-industrial average, the report says
World
4 months ago
Next Article