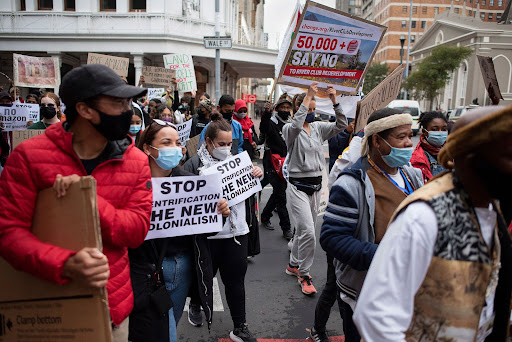 Prof Leslie London’s response to your editorial is just the latest in a consistent strategy by the author (the first applicant in the court case against the River Club redevelopment) to mislead the public about this vitally important and world-class development (“Editorial over Amazon development misleads”, March 27).

In terms of the first dichotomy, both applicants in the interdict case, London and Tauriq Jenkins, have time and again dismissed the agency, rationality, standing and will of the recognised true custodians of the heritage of the site — the majority of Cape Peninsula Khoi. These First Nations groups formed the Western Cape First Nations Collective, which has worked hard with the developer over several years to reach a final development plan that aims to ensure their intangible heritage is given manifestation at the site.

But the agency of these true custodians to represent their own interests has been belittled by London and Jenkins. For example, they have been reported in the media as saying the heritage features that would form part of the site (a First Nations-operated and managed heritage, cultural and media centre, indigenous medicinal garden and eco and heritage trails throughout the development) are akin to “Disneyland”. Therefore, the framing of the redevelopment as being at the cost of heritage is not only incorrect, but also deeply and paternalistically patronising to the Western Cape First Nations Collective.

In fact, far from affirming London’s position about the effect on heritage resources, in her judgment Patricia Goliath noted that the interdict must not be construed as a criticism of the development, or as casting aspersions on the views expressed by the majority of the indigenous groups and councils of the Western Cape (the collective), who joined as eighth respondents against the interdict and who support the development, that this is a “genuine instance of indigenous agency with members of the FNC [First Nations Collective] partnering with a commercial enterprise to ensure both sustainable development and the enhancement of the site’s heritage resources”.

Painting the alternative to the redevelopment as the preservation of an environmentally pristine site is just another red herring by London and an attempt to deflect from the actual state of the property before construction started, and what the redevelopment will bring to the area. One need only drive along the M5 to see the mounds of alien vegetation and waste the project has dredged from the Liesbeek River as part of its riverine and environmental rehabilitation plans to know it was far from pristine. Before construction started, the site was a privately owned (and still is privately owned) mashie golf course with a tarmac parking lot and restaurant — all atop an infill and covered in alien grass.

The redevelopment would see the complete transformation of the property into an environmentally safe and beautiful space. This work will include the extensive rehabilitation of the degraded and polluted riverine corridor next to the property, including replacing the concrete canal in which the river flows along the property into a beautiful naturalised riverine environment. It will also include transforming the stretch of the old water course along the Liesbeek Parkway (where a river no longer flows) into a vegetated swale with wetland pools that will serve as breeding habitats for a variety of species, providing quality terrestrial habitat for the endangered western leopard toad.

Unfortunately, these plans have been halted as a result of the recent judgment and order handed down by Goliath to interdict construction of the R4.6bn River Club redevelopment. The Liesbeek Leisure Properties Trust has filed an application for leave to appeal against this ruling. It is in the interests of justice that this be granted, because a decision such as this is final in effect and in substance, and the harm that flows from it is serious, immediate, ongoing and irreparable. If the order remains operable, 6,000 direct and 19,000 indirect jobs will be lost (including the 750 construction workers who were sent home when the ruling was delivered), at a time when Stats SA’s  quarterly labour survey for the fourth quarter of 2021 recorded a 35.3% official unemployment rate, the highest since the start of the survey in 2008.

Aside from the losses to the Cape Peninsula Khoi, the broader community will also lose the significant socioeconomic and environmental benefits that would have flowed, including the provision of developer-subsidised inclusionary housing (for people who otherwise could not afford to live in this suburb), major upgrades to surrounding roads, and safe and accessible green parks and gardens that will be open to the public.

The Liesbeek Leisure Properties Trust’s appeal also notes that the two applicants, London (a University of Cape Town academic and chair of the Observatory Civic Association, which has 55 members) and Jenkins (the self-proclaimed leader of a voluntary group called the Goringhaicona Khoi Khoin Traditional Council, and a colleague of London and member of his civic association), have no legitimate claim over the intangible heritage over the broader two rivers area, of which the River Club comprises 5%, or standing within the First Nations community. However, both were provided with an opportunity to submit their comments regarding the proposed redevelopment during the lengthy development approval process. Their comments were responded to and considered by the relevant authorities that approved the project.

In addition, even though Jenkins and the traditional council have no custodianship over the intangible heritage of the area, they were invited to participate in the consultations with First Nations groups. Yet they voluntarily elected to pull out of these processes. These are the facts that respond to the baseless allegations about consultation levelled by Jenkins and London (for the first time in court), which the respondents therefore did not have the opportunity to respond to.

For these reasons we will again ask for an appearance in court to submit evidence on the injustice of blocking this world-class project and the many critical opportunities it will bring, including much-needed jobs.

• Tannenberger is trustee and spokesperson for the Liesbeek Leisure Properties Trust.

Opponents seek interdict, saying authorisation was based on incoherent analysis of heritage-impact assessment undertaken in terms of wrong statutory ...
National
6 months ago

Project worth R4.5bn at risk after interdict on Amazon HQ development

Project worth R4.5bn at risk after interdict on Amazon HQ development