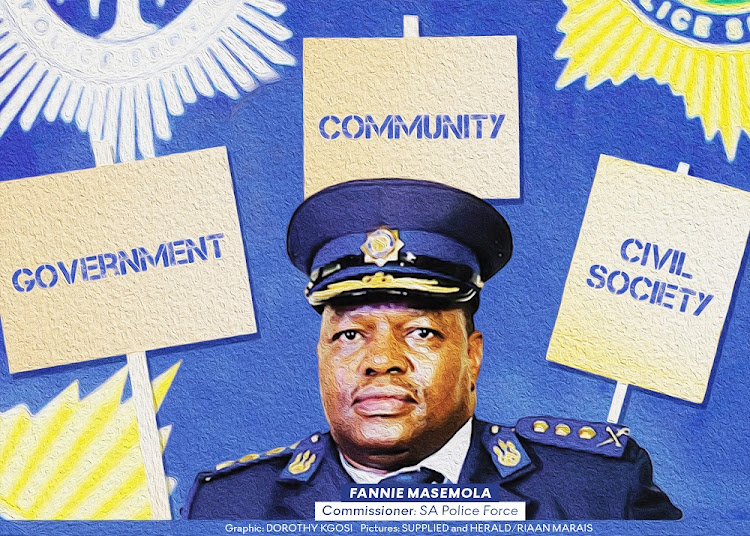 On Friday morning South Africans woke to a new national commissioner of police, Gen Fannie Masemola. By all accounts a competent career professional, Masemola has been given an opportunity to change SA’s trajectory forever.

For a democracy to thrive citizens must trust their leaders. Police are the face of government in our communities; they are the state on the streets. The way police are perceived and experienced by the public fundamentally affects how the public perceives the state. Therefore, the single most important objective of the police must be to gain public trust. Police effectiveness is dependent on it. Recognition of this must be at the core of Masemola’s agenda.

When the public believes that police will listen to and respect them, they are more likely to obey the law in their absence, co-operate with police when asked to, and even identify with the authority they represent — to feel they can contribute to SA. In other words, police work isn’t just crime-fighting work; it is culture-generating work. The way police engage with and are perceived by the public shapes the nature of SA society.

If we want less violence in SA police must use force reasonably and proportionately. If we’re going to tackle gender inequality and gender-based violence, police officials cannot flirt with or harass members of the public. If we’re going to reduce road traffic fatalities, police cannot drive recklessly or fail to act when others do so in their presence. SA’s police must embody the values and behaviour we would hope to see in our most revered leaders.

Masemola can make this happen. He won’t be able to do it alone. He won’t be able to do it haphazardly. But he can do it. The process may be long, and it may be difficult. It will require more than slogans like “back to basics” or tinkering with existing structures.  For the SA Police Service (SAPS) to become an institution that improves public safety and the nature of SA society, it will need to re-envisage what it does and how it does it. This will require a fundamental shift in organisational culture.

The new national commissioner’s work must begin with the wholesale rejuvenation of SAPS top management, ensuring that the right people are in the correct positions and that they support his reform agenda. This must begin by replacing the existing culture of compliance with one of station-level autonomy, innovation and strict accountability management.

It means moving from reducing recorded crime statistics and chasing output-based performance targets (such as number of cars or people searched) to evaluation based on metrics that police cannot manipulate. These could include rates of violence-related injuries recorded at health facilities, mortuary-recorded murders, and trust and satisfaction measures based on calls to crime victims and people who’ve spent time in police holding cells at every police station area.

The police are not trusted by a large majority of the public. As a result, the state cannot claim the legitimate monopoly on violence required to give life to the government’s oft-referenced social compact, and our broken society is the product of this failure. Masemola can turn this around. He can give birth to a new country, a just SA.

Regaining the monopoly of force means responding swiftly and fairly when people call on the police for help. It means treating all people with dignity, listening to their stories whether they be victims or suspects, being polite, and explaining why they as the police are there and why they are doing what they’re doing. It is about clear, straightforward communication. There is good evidence to show how much impact this can have on improving public trust in the police.

Achieving such fundamental change will not be achieved by the SAPS leadership alone. Undoing the years of measurable damage and declines in public safety, despite a 66% budget increase since 2012, is a huge undertaking. Committed, trust-based partnerships with those outside the SAPS will be vital. Even before the significant damage done to the SAPS in the latter half of Jacob Zuma’s presidency, the National Development Plan (NDP) had called for the establishment of an independent, multisectoral national police board to review existing standards for police recruitment and promotion and to assess its professional standing based on international norms and standards.

People with detailed knowledge and experience in reforming large organisations should be appointed to such a structure. It could play a hugely valuable role in assisting Masemola and a rejuvenated leadership cohort to better understand and implement the changes needed to reform the SAPS and set SA on a new path grounded in the rule of law.

The board should also assess how the overall governance system of the police, including the Civilian Secretariat for Police and the Independent Police Investigative Directorate, could be strengthened to support such efforts.

President Cyril Ramaphosa’s willingness to use the process of selecting the national commissioner as recommended in the NDP is a positive sign.  He’d do well to consider its other recommendations for improving the organisation too.

Moreover, there are a range of recommendations from other inquiries and panels of experts on policing that have been undertaken since 2012 that should be given thoughtful consideration by the president, police minister Bheki Cele and Masemola. Based on these, a detailed reform plan should be developed and the implementation thereof regularly reported on to parliament.  The substantial increases in murder, robbery and organised crime, along with the widespread violence of July 2021, demonstrate the urgent need for a considered plan to improve SA policing.

When South Africans believe police are responsive and respectful, perceived legitimacy will grow, not only in the police but also in the state. SA’s residents will begin to trust their neighbours and find the courage to take risks in business, entrepreneurship and personal relationships. Knowing that the state, through its police, will respond swiftly, professionally and fairly to repair the social compact when it is broken will lay a foundation to set SA on a new path.

Gen Masemola cannot fix the police alone, but with government, civil society and community support it is possible that he could bring about a new and better SA.

• Newham is head, and Faull senior researcher, in the justice and violence prevention programme at the Institute for Security Studies.

Candidates who ruffle fewest feathers or do best at playing to the gallery emerge victorious, writes Lawson Naidoo
Opinion
4 months ago
Next Article

Illegal land occupation could increase ahead of elections, say police

Illegal land occupation could increase ahead of elections, say police