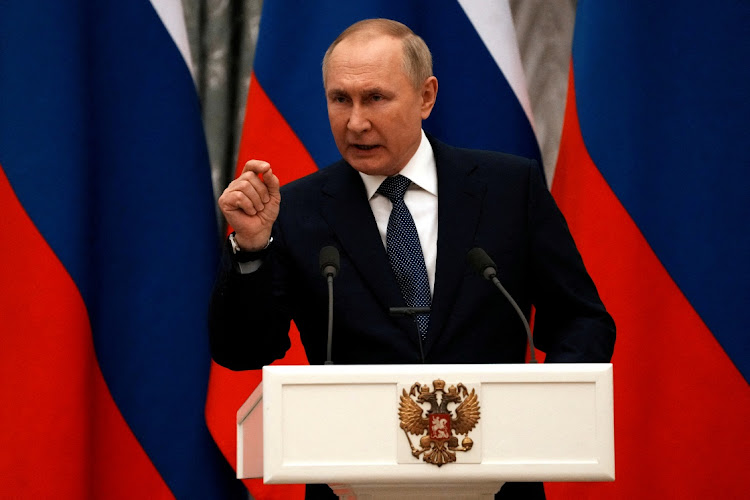 “Today is Georgia, tomorrow it might be Ukraine, then the Baltic states and after that a time may come for Poland.” These were the words of former Polish president Lech Kaczynski, spoken in the wake of Russia’s 2008 invasion of its southern neighbour.

No doubt Kaczynski had in mind the 1930s, when Adolf Hitler methodically dismantled the Versailles Treaty and sparked  World War 2. Though Hitler’s actions were primarily directed at reversing the Versailles “diktat” that followed the Great War, he was also motivated by a widely shared German racial Weltanschauung that sought to rearrange the borders of Europe and cleanse the continent of Jews.

In particular, Hitler was enthralled by the work of Houston Stewart Chamberlain, the British-born Germanophile and son-in-law of Richard Wagner. Hitler admired Chamberlain’s racism and social Darwinism, and his Manichean mindset, exemplified in The Foundations of the Nineteenth Century, a two-volume best seller published in 1899 in which the so-called Aryan was pitted against the Semite in a struggle for survival.

Like Hitler, Vladimir Putin’s numerous foreign adventures have to be placed within a specific cultural and intellectual context. His loathing of liberalism, his macho-Orthodox Christianity and his hostility to the avant-garde, including his hatred of radical feminism, homosexuality and gay marriage, are all part of that.

Among those influencing Putin is Alexandr Dugin, a radical Russian nationalist who flirted with the far right in the 1990s and increasingly turned his mind to Eurasianism, an ideology dating back to the 1930s that maintained Russia was neither European nor Asian. Russian culture was sui generis, its soul rooted in its early history. In 2002 Dugin founded the Eurasia Party (which sought to reunify Russian-speaking peoples in one country) followed in 2003 by his creation of the International Eurasian Movement. By then he enjoyed celebrity TV status.

However, fame rested not on Dugin’s political initiatives but on his magnum opus, The Foundations of Geopolitics: Russia’s Geopolitical Future, published in 1997. Here he built on the works of mystical Russian writers, including Nikolai Berdyaev, whose book The Russian Idea (written during World War 2) identified a Slavic soul; and Lev Gumilyov, a historian obsessed with the biological determination of nations. A specific role for Russia was identified by Dugin, informed by 19th--century Slavophilism as well as Eurasianism.

Anti-communist but fervently nationalist, Dugin’s writing is spiced with mysticism and a mix of Russian Orthodoxy, Aryanism and occult theories that merge into a neo-fascism that seeks to recover a past Russian glory that incorporates, inter alia, Ukraine.

A Russia transformed into “a universal model of culture” was to play a central role in the geopolitical order, bridging the divide between Europe and Asia. Cultural zones are defined in ways that echo those delineated by Samuel Huntington in his Clash of Civilizations (1996). “Land-based Peoples” (Russia) and “Sea-based Peoples” (the US) are, according to Dugin, in perpetual conflict.

With a nostalgia for monarchism and a penchant for conspiracies, Dugin sees the hand of the US behind the collapse of the USSR in 1991. Liberal Russians and the US were the enemy. Liberalism, as understood in the West, had to be blocked. This could be achieved by creating a series of axes: Moscow-Beijing, Moscow-Delhi and Moscow-Tehran. Russia, it was argued, had to look eastward.

These ideas were hugely influential in Russian military and security circles, where The Foundations of Geopolitics was treated as a textbook. They can clearly be discerned in Putin, but to what extent is difficult to assess. To refer to Dugin as “Putin’s head” — as some have — is going too far, but his influence cannot be ignored.

On the other hand, apart from mystical-like ideas, Putin has genuine existential fears. Russia was invaded in both world wars and Nato, the arch-enemy in the Cold War, invokes panic. Having cut his political teeth in the KGB, he has a residual distrust of the West. More than that, Putin valued the material benefits a colonial-style relationship with Ukraine provided during the Soviet years and beyond.

The liberalisation of his western neighbour, coupled with its feisty independence, posed serious challenges. Putin’s brand of autocracy cannot afford to have an open, thriving and plural democracy on his doorstep. Despite these fears, Putin is also a dreamer. And dreams don’t die easily. He wants to recreate the Russian empire. When he spoke of there being no Ukraine he was articulating a deeply held Russian idea, notably evident in the writings of Dugin.