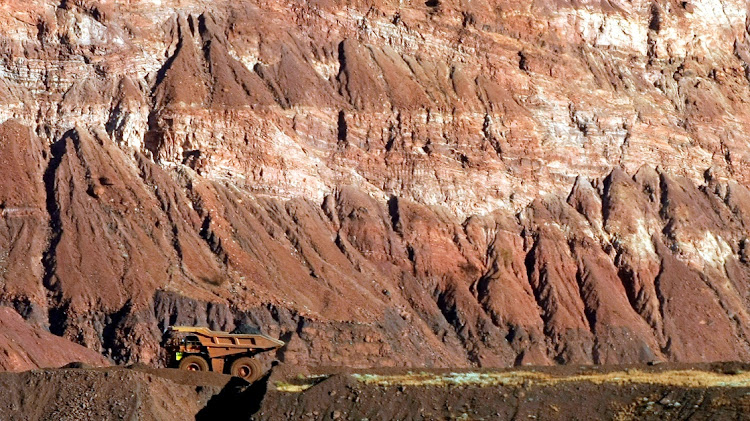 A tipper truck drives on a road through an iron ore mine at Newman, about 1,300km north of Perth, Australia. File photo: REUTERS/TIM WIMBORNE

Launceston — The effect on commodity prices of Russia's invasion of Ukraine has largely focused on crude oil and natural gas in Europe, but a huge surge in Australia's forecast earnings from natural resources shows the wider effect.

Australia's government forecaster said in its latest Resources and Energy Quarterly report, released on Monday, that earnings from commodity exports would rise to a record A$424.9bn for the fiscal year to June 30.

This is up a third from earnings in 2020-2021, and up nearly A$50bn since the December quarter report. Driving the jump, says the office of the chief economist at the department of industry, science, energy and resources, is the upsurge in the price of energy commodities since Moscow's February 24 attack on its neighbour.

It's also likely that the government is being cautious with its forecasting, with the price assumptions likely to be below what is actually achieved over the year to June 30.

Iron ore is Australia's biggest commodity earner. While this is expected to remain the case, the government actually expects revenue from the steel raw material to drop this fiscal year compared with last.

But the price assumption used for iron ore for the 2021-2022 year is $118 a tonne. That is likely to prove on the low side, given the spot price is now $160.01, and has only been below the assumed average price for about 12 weeks of the nine months so far in the current fiscal year.

Iron ore has seen some effect from the Russian conflict with Ukraine, mainly centred on expectations of tighter steel markets as buyers self-sanction purchases from Russia. That has led to the expectation that steel mills in Asia will produce more to make up for lost Russian supplies.

But the resources that have surged in the wake of Russia's action, which Moscow refers to as a “special military operation”, are energy commodities such as coal and liquefied natural gas (LNG).

Australia's LNG exports are forecast to earn A$70bn in 2021-2022, more than double the A$32bn for the previous fiscal year, even though volumes are expected to rise modestly to 82-million tonnes from 77-million.

The jump is due to the forecast price rising to A$16 a gigajoule, which is about $11.99 per million British thermal units (mmBtu).

Asian spot LNG prices have been above this level since the start of the fiscal year, reaching a record $48.30 per mmBtu in late December. But most LNG is sold under crude oil-linked long-term contracts, and therefore would have been sold at prices well below the spot level.

Yet, the strength in LNG prices is likely to continue as long as Europe seeks alternatives to Russian pipeline gas.

Australia is the world's largest exporter of metallurgical coal, used in steelmaking, and it is this commodity, which largely flies under the radar, that is the standout performer.

Again, this price forecast looks cautious. The Singapore Exchange contract has been trading above this level since the start of year, including a surge to a record of $635 a tonne in mid-March, followed by a retreat to a still-elevated $480 on April 1.

Russia is a significant exporter of coking coal, supplying about 30% of Europe's needs, and if self-sanctioning by European steel mills does occur, an already tight seaborne market will face further challenges.

Russia is also a major exporter of thermal coal, used mainly for power generation, ranking behind Indonesia and Australia.

Prices for thermal coal have also surged, with the Australian benchmark Newcastle Weekly Index, as assessed by commodity price reporting agency Argus, hitting an all-time high of $379.69 a tonne in mid-March, before declining to $262.30 by April 1.

Nonetheless, thermal coal prices remain well above the Australian government's forecast of $193 a tonne for the 2021-2022 year. The forecast level would already result in export earnings of A$45bn, nearly three times the A$17bn recorded for the prior year.

It's not just energy commodities getting a boost, given Russia is also a major exporter of metals.

Overall, it's clear that the Russia-Ukraine crisis will deliver Australia, and other diversified commodity exporters, a huge earnings boost.

How long it lasts will depend on whether the conflict can be resolved and Russia readmitted to the Western world's economies, and how widespread self-sanctioning of Russia's commodity exports becomes.

Russia signals all its main exports could soon be in roubles