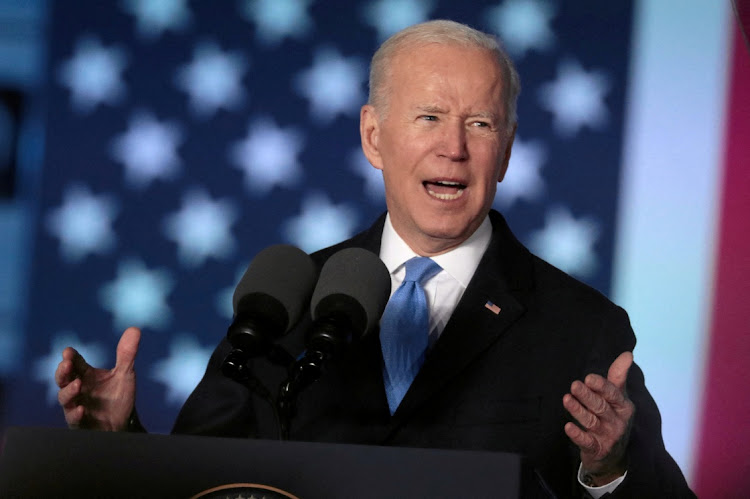 Having recklessly provoked Russian president Vladimir Putin to attack Ukraine, US president Joe Biden and Nato should now be held responsible for the devastating consequences, not only in Ukraine but throughout the world.  Over the past 30 years, numerous American authorities, ranging from Henry Kissinger to the present director of the CIA, William Burns, have repeatedly warned that Ukrainian membership of Nato was a “red line” that the Russians would not tolerate.

Despite such warnings, Biden, then as vice president, orchestrated the 2014 Maidan Revolution “regime change” in Ukraine, in which the US “invested” $5bn. Meanwhile, and solely because of his US presidential connections, Biden’s son Hunter was being paid $1m a year as a director of a criminal Ukrainian fracking company. Biden’s home state, Delaware, is notorious as the money-laundering centre not only of the US but also of the world.

The Ukraine war in the short term has been fantastic for the war-profiteering American arms and oil companies to which Biden is beholden. Nato has since 2014 also trained a Ukrainian army of 250,000 soldiers to Nato standards, while the US government has poured billions of dollars worth of weapons into the country.

Crimea seceded in 2014, but the Azov battalion and other neo-Nazis over the past eight years have killed over 14,000 Russian-speaking Ukrainians in the Donbas region. The Russians have now been eliminating the neo-Nazis who controlled the city of Mariupol where the Azov battalion was headquartered. In addition to flying Nazi swastika flags, these right-wing neo-Nazis are reported to have had swastikas and other Nazi symbols tattooed onto their bodies.

Ukrainian President Volodymyr Zelensky gullibly believed Nato would intervene to protect Ukraine after the Russian attack. Appalling though it is, it is also an attack that Putin can logically argue was undertaken in so-called self defence in terms of the US-imposed Article 51 of the UN Charter. Just how many times since 1945 has the US falsely claimed “self defence” when it attacked Korea, Vietnam, Afghanistan, Iraq, Libya, Syria and numerous other countries, and also instigated “regime change” in another estimated 100 countries?

Histories of what happened to Napoleon and Hitler’s armies should have taught the US and Nato just how Russians ruthlessly react when attacked. A century ago, Britain and the US intervened with over 70,000 soldiers during the 1917-1923 Russian civil war in failed efforts to restore the Romanov royal family. In 1945, US president Harry Truman, in conjunction with Winston Churchill, threatened to drop atomic bombs on Russia, and so began the 45-year long Cold War.

Just how many times since 1945 has the US falsely claimed 'self defence' when it attacked Korea, Vietnam, Afghanistan, Iraq, Libya, Syria and numerous other countries?

Or, alternatively, how the Russians responded in 2011 when the Obama administration unleashed a failed attempt at “regime change” and then war against President Bashar al-Assad and the people of Syria. Russians, including Putin, quite understandably have long memories of Anglo-American duplicity.

Waking up to realities

The UN’s World Food Programme has warned that up to 220-million people — especially in North Africa and the Middle East who rely on wheat, maize and barley imported from Ukraine and Russia — now face starvation. EU countries (especially Germany and France) face economic collapse given their reliance on Russian oil and gas. Having grovelled to US and Nato pressures to exclude Russia from the dollar-based Swift payment system headquartered in Belgium, the EU is quickly waking up to the blowback realities.

10-million Ukrainians are displaced because of this madness, with over 4-million being refugees. According to the Washington Post, only now have the US state department and frenzied Western media finally come to realise that Putin and the Russians had no intention to occupy the whole of Ukraine and its major cities, including the capital Kyiv. Military occupation over 40-million Ukrainians by a Russian army of less than 200,000 soldiers was simply not on the agenda.

The Ukrainian air force and navy have been destroyed, and now have no capacity to support the Ukrainian army. Without a Nato “no-fly zone” and with Russian control over the skies, a defeated Zelensky is now negotiating the terms of surrender before Russia takes over Odesa and, in the process, completely cuts Ukraine off from the Black Sea and its ports. Zelensky has little option but to accept Putin’s terms of surrender, including no Ukrainian membership of Nato, political neutrality, the elimination of neo-Nazis, and recognition of secession by Russian-speaking Crimea and Donbas regions.

Yuan, roubles or gold over dollars

So what was it all about? Was it worth such a devastating war? Biden has been threatening Putin with “sanctions from hell”.  In particular, the sanctions include Russian exclusion from the Swift system, which authenticates international financial transactions. However, the Russians have taken note over the years of numerous such threats and, together with the Chinese, have set up traps and have created alternative systems to Swift, which may destroy the dollar as the world’s reserve currency.

The dollar has derived its dominance and power thanks to an agreement in 1973 negotiated between Kissinger and Saudi Arabia. Oil is, of course, by far the major component of international trade. All Opec oil would be priced in dollars only and in return the US would protect the Saudi royal family against domestic insurrection. Saudi “black gold” in effect replaced the gold standard.  Accordingly, all countries have in practice been subsidising the US economy and its reckless expenditures on weapons and wars. Now the US economy is imploding, and the American middle and working classes are increasingly impoverished on minimum-wage jobs, because of the disastrous consequences of US “forever wars”.

Regime change has been the past fates of Saddam Hussein, Muammar Gaddafi, Venezuelans and others who wanted payment for their oil in gold or euros instead of dollars. The US has since been replaced by China as the main importer of Saudi oil, and China is now negotiating with the Saudis to accept payment in yuan instead of dollars. Similarly, Russia has already informed the Europeans that its oil and gas are now being sold for yuan, roubles or gold, but not for dollars. If these alternative payment systems prove successful, they will mean the end not only of dollar supremacy but also of the US Empire Inc.

Cooler heads are thankfully focusing on avoiding a nuclear war, or a war of Armageddon and consequent destruction of the planet. The recent US secretary of state, Mike Pompeo, irrationally believed that such a war would bring about the second coming of Christ. As Archbishop Desmond Tutu used to say:  “God save us from those so-called Christians who hold a bible in one hand and a gun in the other”.

Instead of squandering $2-trillion a year on war preparations, the world must reallocate those funds to climate change, renewable energy and alleviation of poverty

Once a permanent ceasefire is negotiated the world — especially war-obsessed Americans — must take heed of a Ukrainian saying: “If you prepare for war, you get war. If you prepare for peace, you get peace”. All recourse to wars must in future be rigorously prohibited. Inevitable conflicts between states must be resolved peacefully in the new era of post-Covid, post-Ukraine war catastrophes.

Resort to war by states has actually been illegal since the 1928 Kellogg-Briand Pact, a treaty that is still valid under international law. Instead of squandering $2-trillion a year on war preparations, the world must reallocate those funds to climate change, renewable energy and alleviation of poverty — in short, human security values as also expressed in section 198 of SA’s constitution: “to live as equals, to live in peace and harmony, to be free from fear and want and to seek a better life”.

SA’s abstention from the recent vote in the UN General Assembly and our refusal to support the US and Nato are fast being vindicated. In contradiction of its pretensions as a “defensive alliance”, Nato, since its establishment in 1949, has always been highly belligerent. It must be disbanded and the 800-plus US military bases in Europe, Asia and Africa that are targeted at Russia and China must be closed down.

• Crawford-Browne is SA co-ordinator for World Beyond War.

Like apartheid SA, Russia will probably end up an isolated global pariah
Opinion
4 months ago