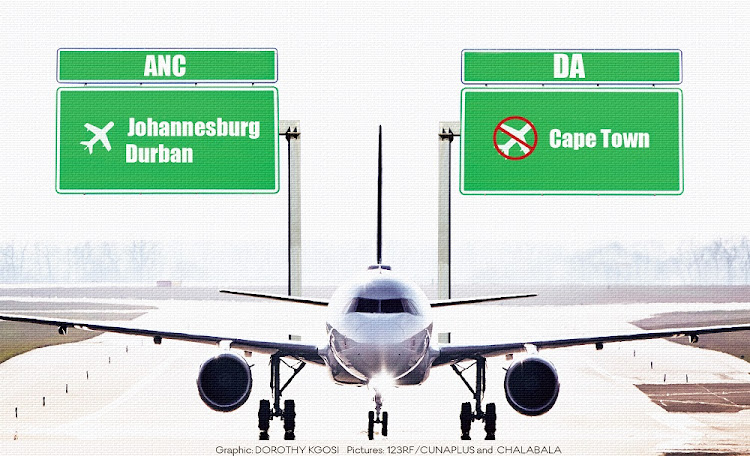 In a normal democracy the decision by the Civil Aviation Authority to ground a major carrier would lead to a collective sigh of relief.

State institutions exist to protect citizens rather than special interest groups. If an airline is cutting corners on maintenance you want someone in authority to step up and, even at grave inconvenience to passengers holding tickets, keep potentially unsafe planes on the ground.

But we have long ceased to be a normal democracy. The SA Civil Aviation Authority authorised an SAA Airbus flight from Brussels in late February 2021 to bring the first Covid-19 vaccines to SA. However, because of its precarious finances as well as the pandemic and a year of travel lockdowns, the airline had been grounded. Its pilots hadn’t clocked the requisite flying hours or maintained their training.

“Each request for exemption is evaluated on its own merits. The Brussels flight was a one-off exemption; and was granted on the strength of its risk mitigation measures, which are aligned to SA civil aviation regulations and acceptable global standards,” a statement read.

As things turned out, the decision to let the pilots take off on what was little more than a state-sponsored publicity flight did not turn out brilliantly. The crew miscalculated the take-off weight by almost 90 tonnes. Accordingly, when the pilots retracted the flaps, disaster was only averted because the Airbus’s aviation systems took control, increasing thrust while lowering the nose of the aircraft.

These so-called “alpha floor events” are automatically communicated to the manufacturers of the airframe and the engines. They are also required by regulation to be reported by SAA to our Civil Aviation Authority within 24 to 72 hours, depending on the seriousness of the incident. Instead, the airline stalled for almost three weeks.

As far as anyone is able to tell, no consequences were imposed on SAA for the failure to report, or even for the gross incompetence that permitted the incident to occur in the first place.

The same laissez faire attitude does not appear to have informed civil aviation’s attitude to BA Comair, whose aircraft were grounded for almost a week, from March 12 to 17. What began as a one-day grounding after concerns raised by the authority, turned into an almost weeklong event at the March peak of the air travel season.

A significant number of the 20,000 cyclists in Cape Town for the annual cycle tour found themselves stranded on the Sunday after the race. Routes all over the country were severely compromised, with the price of one-way fares between Cape Town and Johannesburg increasing by up to 400%.

There appears to be no dispute that the Civil Aviation Authority identified issues at Comair that required resolution. However, nothing suggests any of these concerns was vaguely in the realm of the “alpha floor” event of February 2021 from which SAA escaped scot-free. It is impossible not to conclude that the body charged with keeping our skies and airline passengers safe does not treat all carriers equally.

In fact, talk in the industry is that the grounding of Comair might be a precursor to a major relaunch of SAA in the domestic market. After an absence of two years the once ubiquitous national flag carrier may need all the help it can get from government agencies. Painting Comair as a noncompliant, potentially dangerous and unreliable carrier would help.

In December 2018 the authority grounded another carrier (Cemair) in the midst of the holiday season. While Cemair finally managed to get the decision overturned by an appeals process five months later, the damage had been done. It took almost five more months before Cemair was able to fly again, despite the success of its appeal.

In short, the Civil Aviation Authority enjoys untrammeled power to ground airlines, and to withdraw their licences, at great inconvenience to travellers. Its exercise of this arbitrary power cannot be seen as neutral, especially in the context of how business is done in a country in which the majority of the governing party’s ministers have been directly or indirectly implicated in corrupt activities.

Nothing makes this clearer than the debacle of Delta Air Lines’ long-outstanding application to obtain landing rights for its Atlanta-Johannesburg-Cape Town triangular route. The application has been sitting with transport minister Fikile Mbalula since May 2021. Despite requests, followed by demands from the Western Cape government, Mbalula (who recently claimed on Twitter to have landed in Ukraine) has been singularly silent.

The province declared an intergovernmental dispute late in 2021, to which Mbalula replied in February asking for more time to consider the request. An additional 15 days were granted, but this extension expired on March 16. Mbalula’s spokesperson disingenuously pretends the delay has nothing to do with the minister.

“The Delta matter is before the International Air Service Council. We can only comment once the council has processed the matter,” he said. He failed to explain why the minister would have requested the extension if the application was being considered by the council.

Granting Delta the right to take on and offload passengers in Johannesburg and Cape Town — a right enjoyed by Emirates, for example — is believed to be worth as much as R500m a year to the Western Cape economy. The US is the province’s most important market, taking more than 10% of the province’s exports. It is also the major foreign capex investor in the region. This would suggest that purely on rational grounds national government should be doing everything in its power to increase direct connections between Cape Town and the US.

Even if Delta wanted to offer an inducement to expedite the decision-making process, it is prohibited by US law from doing so. Transport department officials must know this, so they can’t be holding out for a friendly “incentive”. The more likely explanation is that the ANC is not happy to facilitate any arrangement that would benefit the Western Cape.

In fact, there is evidence that it exercises its power at a national level to undermine the economy of the province. The restrictions imposed on the transportation of wine (and therefore all wine exports) during the level 5 lockdown in March and April of 2020 are one such example. However little we knew about Covid-19 management in those early days, the one certainty you could safely bank is that bottled wine could leave the country with no more risk to anyone than the permitted exports of avocados, citrus, gold and diamonds.

An unnamed department of transport official has been quoted as saying: “Everyone wants to land and pick up passengers in Cape Town. That though kills the market for Johannesburg and Durban respectively.”

The message here is clear: officials of the national government would rather force investors to use Johannesburg and Durban, even if there are more efficient direct routes available. Since the Western Cape is not governed by the ANC, it is an alien presence and its trade must be throttled, even if this comes at the expense of jobs and foreign exchange.

• Fridjhon is a journalist and critic.

Renewables are necessary for a balanced energy mix, but they must be socially owned
Opinion
5 months ago

Ramaphosa did mention SOEs at the ANC alliance’s lekgotla, but only in passing
Opinion
6 months ago
Next Article

DAVID MAYNIER: A focus on infrastructure spend to boost the Western Cape

DAVID MAYNIER: Why it’s time to privatise the Port of Cape Town

DAVID MAYNIER: A focus on infrastructure spend to boost the Western Cape

DAVID MAYNIER: Why it’s time to privatise the Port of Cape Town