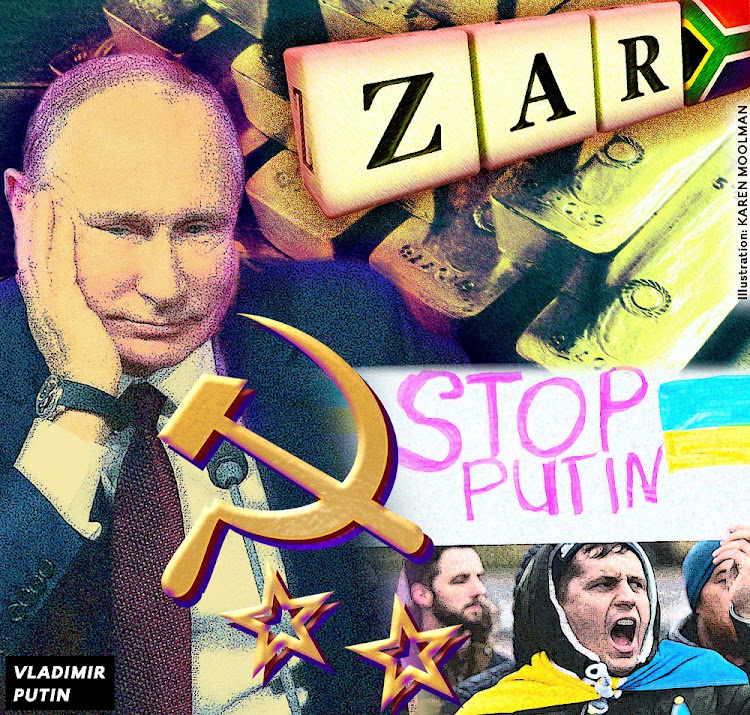 The biggest crisis in Europe since World War 2 has sent financial markets on another dizzying roller-coaster ride over the past week. The conflagration in Ukraine has had economists ripping up their forecasts and sent them back to the drawing board.  Predictions were already battered by the uncertainties brought on by the Covid-19 pandemic and subsequent supply-chain bottlenecks.

The dominant consensus that is emerging is one of doom and gloom for Africa, with rising prices of crude oil and food staples, especially wheat, feeding into existing instability. This is ominous given the number of military coups already witnessed recently in and around the Sahel region. One need not look too far back in history — just a decade, to 2011-2012 — for a period when a spike in prices caused civil unrest from Nigeria to North Africa and stoked the Arab Spring.

In the case of SA, already saddled with forecasts of an anaemic growth rate of 1.9% for 2022, according to the IMF, and staggering under the burden of an appalling unemployment rate and a historically high GDP-to-debt ratio, it is hard to see many positives.

Dawie Roodt, chief economist at integrated JSE-listed financial services company Efficient Group, is not alone in being negative on SA’s short-term prospects, all the more so in light of the current events in Europe. “We have seen the rand coming under a lot of pressure,” he says. “We simply do not have the fiscal space to support the SA economy if something else goes wrong somewhere. If there’s a sudden increase in food prices, we simply do not have the capacity to subsidise food, as an example. The fiscal accounts are very constrained.”

However, while food and oil prices may feed into inflation, and that could in turn result in higher interest rates, there is some reason to believe the opposite might also be true in the longer term. Inflation has actually been unexpectedly subdued in SA in the face of the same supply-chain bottlenecks the rest of the world is facing. In fact, Roodt cannot remember a time when US inflation was higher than that of SA.

If this is sustained it might be good news for interest rates too — one of the factors cited as a cause for concern for SA’s economic outlook. “It’s very easy to envisage a situation where interest rates will go up much less than I thought,” Roodt explains. “I can quite easily envisage a situation where global demand collapses because of this crisis, depending on how it spreads out to the rest of the world.”

Part of the reason for lower inflation in SA is subdued economic activity. But there is another, one that gives a glimmer of hope and may point to potential tailwinds for the SA economy.  According to Roodt, inflation has been subdued because the rand is maintaining its value due to 2021’s unexpected commodities boom. In fact, even though the financial year isn’t quite out yet, finance minister Enoch Godongwana reckons the additional revenue will net the country’s coffers an extra R182bn.

Russia has already seen some of the heaviest sanctions imposed on any country in recent years, and it supplies a fair chunk of the world’s metals and minerals, including a tenth of its aluminium and copper and more than 40% of the world’s palladium, used in catalytic converters. SA is well positioned to take up some of that slack.

Jeff Currie, global head of commodities research at Goldman Sachs, goes as far as to predict a commodity super cycle for the coming decade — and that was before the war in Ukraine began.  This is admittedly not a commonly shared viewpoint. “We would need a relatively large economy to really take off before that would fuel a long-term super cycle,” Roodt says. “I think the Indians may be the economy that could lead to a real broad-based super cycle in commodities … [but] we are not there yet. What we’re currently seeing is safe metals and some strategic ones going up in price, which is good for SA.”

Of course, this could all just be a short-term boost that will eventually fade, beholden as it is to fickle international markets.  Where the real boon may lie is in the long term, if the European crisis flips investment risk assessment analysis on its head, where the well-documented problems that are dragging the SA economy down are outweighed by the sudden advantages of a geographically distant, politically neutral state with half-decent infrastructure and an abundance of natural resources.

With Russian President Vladimir Putin having placed Russia’s nuclear arsenal on full alert, even previously attractive destinations such as Australia suddenly become more risk-laden, with the risk of a spike in tensions between China and Taiwan also coming into play. “Despite all the problems we have, and we have plenty of them, SA is still a relatively safe place to do business,” Roodt said. “If politicians play this correctly, we actually can become a magnet for international investment. Yes, without a doubt, we can benefit.”

Roodt also sees immediate gains in agriculture, where he suspects there will be a large grain surplus in 2022. “I know countries in northern parts of Africa, like Ethiopia and Morocco, import a lot of grain from Ukraine. So perhaps that is the real opportunity for SA to capitalise on and export much more grain.”

All of this could also make SA’s 10-year government bonds’ 10% yield very attractive. “I mean, where can you get 10% on a 10-year bond?” Roodt asks rhetorically. With a mature financial sector that is highly liquid, many might be drawn to the prospect of high yields in an economy that is now not expected to do as badly comparatively as the doom-mongers have been predicting.

“I could tell you, if I was an American and I want to take a quick bite out of a very juicy apple somewhere, SA without a doubt is the place.”

With all the worrying apocalyptic news overloading us all right now, there may be some hope in this faraway corner of the world yet.

• Philipas is a British media Africa correspondent based in SA.

Federal Reserve running out of policy options amid geopolitical crisis

The main thing is that Ukraine wants to be seen as an independent sovereign nation, not a Russian appendage
Opinion
4 months ago
Next Article

China calls for an end to violence in Ukraine

China calls for an end to violence in Ukraine