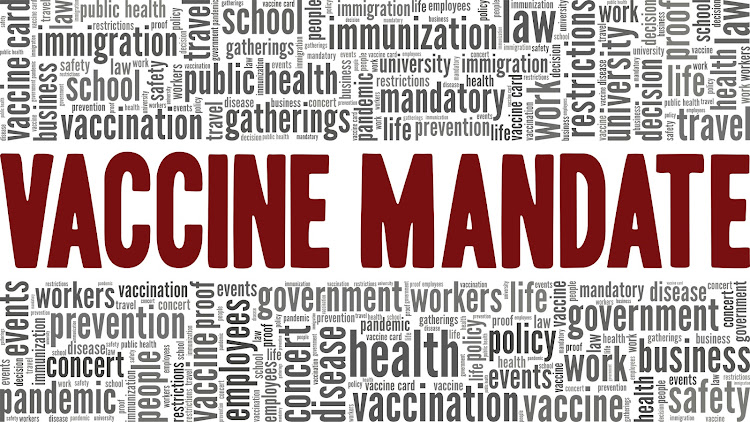 The notion that individuals may be compelled to be vaccinated against Covid-19 raises a number of fundamental legal issues. The recent decision of the US Supreme Court on this issue assists greatly in disposing of the matter.

To understand the court's judgment it is useful to have some understanding of the American constitutional dispensation. In 1776 the US realised that declaring independence presented  Americans an opportunity to start afresh. And so the US introduced a constitutional democracy — the so-called American experiment.

European countries were bogged down by their histories and institutions such as aristocracies and monarchs, which precluded such an experiment. Much of the American experiment embodied existing ideas all underpinned by the then existing English common law.

Individuals’ rights to life, liberty and the pursuit happiness were captured in the Declaration of Independence, and the new state was obliged to safeguard these or face the prospect of being removed by force. So in terms of this dispensation the only authority anyone could have to act against any individual would be if so authorised in terms of a clear law. Without a clear law, no action could be taken against any individual.

The rule of law stands impenetrably between the individual and others, including the state. This is the clear imagery conveyed by retired SA judge Rex van Schalkwyk’s brilliant definition of the rule of law: “The rule of law is the barrier the law sets against tyranny.”

Government thus may not under any circumstance operate outside the law. A vaccine mandate can only be imposed if a law exists allowing that

Tyranny operates outside the law. Government thus may not under any circumstance operate outside the law. A vaccine mandate can only be imposed if a law exists allowing that. With this background the decision of the US Supreme Court can be examined.

Taking its cue from Biden, the Occupational Safety & Health Administration decided to impose mandatory vaccinations upon millions countrywide. Using its emergency powers, the administration issued regulations to achieve this outcome. Scores opposed the mandate, including 22 states. The courts were then approached to suspend the regulations pending the substantive court case dealing with the merits of the matter. The order to suspend was initially granted, and then overturned, and so an urgent application was made to the US Supreme Court to reinstate the stay of the implementation.

In the end, understanding the US constitutional dispensation, the case turned out to be a no-brainer. In retrospect, the only surprising aspect, knowing the above constitutional background, is that the matter required a court case. The following simple questions arise, only two of which needed to be addressed:

As far as the first question is concerned, the Occupational Safety & Health Administration (Osha) is the institution that tried to impose the mandatory vaccination through a temporary emergency safety standard. But it was established by an act of congress in 1970 and has only tried to pass emergency standards nine times. Of these, six were challenged legally and of these only one was deemed valid.

On the simple question of whether a law exists allowing the institution to impose mandates, the court noted that administrative agencies are creatures of statute. They have no powers not to be found in the law itself; thus “they possess only the authority Congress has provided.” The court noted the imposition of a vaccine mandate was “no everyday exercise of federal power”. To give wide-ranging powers to an agency, the court noted that “we expect Congress to speak clearly when authorising an agency to exercise powers of vast economic and political significance”.

Thus the question was whether the act of Congress authorises the institution to impose a vaccine mandate. The court answered, “It does not”. The act authorises occupational safety and health standards, but the court concluded the vaccine mandate was a public health matter and as such “falls outside Osha’s sphere of expertise.”

Covid-19 is not only an occupational hazard but also a hazard of everyday life. The court noted: “Permitting Osha to regulate the hazards of daily life — simply because most Americans have jobs … would significantly expand Osha’s regulatory authority without clear congressional authorisation.”

By attempting to impose the mandate the Occupational Safety & Health Administration was acting outside its authority. Indeed, the usual safety precautions can be left at work; but a vaccine “cannot be undone at the end of the workday”. An employee cannot be unvaccinated when he goes home. The administration was given powers by Congress to regulate occupational dangers, but was trying to regulate public health.

In my view the UK supreme court would come to the same conclusion its US counterpart came to. In the case of secretary of state for the home department, Ex Parte Simms 1999, Lord Hoffmann stated the common law position succinctly, clearly and with beautiful simplicity: “But the principle of legality means that parliament must squarely confront what it is doing and accept the political cost. Fundamental rights cannot be overridden by general or ambiguous words.”

Both the US Supreme Court and the UK House of Lords in effect said the same thing. For a mandatory vaccine to be imposed by law a specific, clear law would be required. This is not a constitutional issue, but simply a run-of-the-mill rule of law 101 matter.

In the SA debate there is not yet a clear, specific law authorising vaccine mandates. There are copious references to general statements to be found in safety legislation and reference to regulations promulgated in terms of the Disaster Management Act, but these general statements will simply not do. Further, a mandate cannot be imposed by regulation unless the empowering act clearly authorities the mandate.

Even if a law is passed by parliament, the third question becomes relevant: would this law pass constitutional muster? This is highly unlikely. So the idea that a lawfully sanctioned mandated vaccination policy exists in SA is simply fanciful thinking.

• Vivian is professor of finance & insurance at the Wits University School of Economic & Business Sciences, and a member of the Free Market Foundation’s rule of law board of advisers. He writes in his personal capacity.

Law considers how much risk an unvaccinated person poses to colleagues

Law considers how much risk an unvaccinated person poses to colleagues