HELMOED RÖMER HEITMAN: SA’s military is on a downward spiral towards becoming a mere militia

The cabinet is either clueless about what is required, or unwilling to listen to those who do 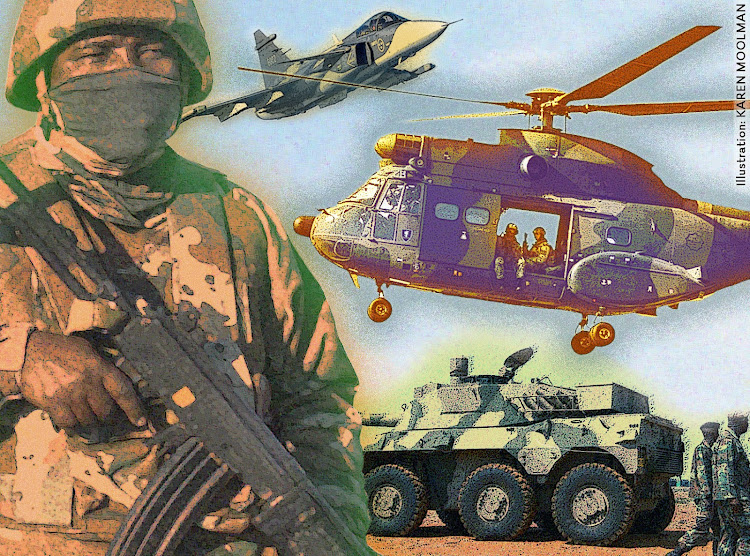 The past few months have starkly illustrated how SA’s military capability has declined. The entire Gripen fighter fleet has been grounded for months for lack of a support contract, leaving SA without even air policing or air reconnaissance capability. The navy has been unable to deploy to interdict supplies to guerrillas in Cabo Delgado, Mozambique, because it had lacked the funds to maintain its ships properly. And there were no Rooivalk attack helicopters to cover the hot extraction of a special forces team in Cabo Delgado after it suffered casualties.

The decline in capability has long been clear: the army cannot deploy the 22 infantry companies needed for effective border patrol; the navy could not sustain the Mozambique Channel patrol and cannot patrol home waters effectively; and the air force has no maritime surveillance aircraft to monitor our waters or the channel.

The Battle of Bangui in the Central African Republic in 2013 rang the alarm. SA’s deployed force was too weak, too lightly armed and equipped and lacked air support; the paratroopers and special forces were not relieved by an infantry battalion as should have happened; and when the Seleka rebels attacked there was not enough airlift to reinforce them. Only the outstanding performance of the troops averted catastrophe, but we lost 15 soldiers.

That led to a decision that SA troops would not again deploy without air support, hence the Rooivalk attack helicopter presence in the Democratic Republic of the Congo (DRC). They have played a major role, covering insertion, extraction and casualty evacuation missions and striking guerrilla positions.

Despite the lesson of Bangui and the proof of the pudding in the DRC, SA’s deployment to Cabo Delgado is, after six months, still short of even the laughably weak level set by the Southern African Development Community (Sadc), and sees special forces deployed with no backup, no air support, no follow-on force and no naval force to interdict seaborne supplies to the guerrillas.

There is the explanation that the Sadc has not authorised the full deployment — and Maputo is probably also dragging its feet — but that is an excuse, and a poor one at that. An operation should be conducted properly or not at all. Leaving special forces out on a limb without support is unprofessional and irresponsible. And SA should be taking the lead, not hiding behind Sadc ineptitude.

A large part of the problem is the state of the SA National Defence Force (SANDF).

In the air force only two C-130 Hercules transports are operational and reportedly only a third of its Oryx helicopters. With five Oryx in the DRC and two in Cabo Delgado, this suggests seven or fewer available for contingencies. The absence of Rooivalks in Cabo Delgado suggests that those in the DRC may be all the air force can deploy. In addition, it seems support contract problems mean only part of the Hawk fleet is operational, while the Gripens lack a long-range air-to-air missile and stand-off precision weapons, and the Rooivalk has not received the Mokopa missile that was designed for it. And, of course, there are no effective maritime surveillance aircraft.

The navy is unable to patrol home waters or deploy to the Mozambique Channel because it lacks the funds to maintain its ships, let alone deploy them. Only one frigate and one submarine have undergone a partial refit in the 17 years since commissioning, with a second submarine’s refit stalled over contracting issues. The only support ship is 35 years old and in need of a refit, and the smaller vessels are all well beyond their service lives. The Treasury apparently envisages providing funds to refit the frigates and submarines only around 2033 to 2035.

That deserves some analysis to understand what it means: the ships entered service between 2005 and 2007. Properly maintained — with regular dockings and refits, plus modernisation and upgrade of ship systems, sensors and weapons — they would have a service life of 30 years, which could comfortably stretch to 40, perhaps even beyond. Failing proper maintenance, by about 2033 to 2035 they will be in such a state that discarding them might be the most practical decision.

We are allowing national assets that cost about R11bn to acquire and with a replacement cost of perhaps R35bn or more to deteriorate to where we may have to discard them prematurely. There are three inshore patrol vessels of dubious utility in build, as well as a new survey ship. But if the government’s approach does not change dramatically, it will not be long before they too are tied up pending unfunded maintenance.

The army produced a bright spot last year with the first field training exercise in a quarter of a century; it came close to employing a full brigade, a start towards relearning mobile operations. But its major equipment mostly dates from the 1970s and 1980s, the newest from the 1990s, and like the air force and navy it lacks the funds to maintain it properly, let alone modernise or upgrade it. And it is short of infantry to meet its commitments on the borders or in the DRC and Mozambique. It should have about 23 infantry battalions but has only 14, and not all with a full complement of deployable personnel.

The people in uniform in SA are mostly doing “the best they can with what they have”, but their best is not going to be enough. The SANDF is in a downward spiral, which if not reversed will reduce it to a militia with limited border protection capability. The blame lies with the cabinet, which either does not give a damn or simply has no grasp of what is required and is unwilling to listen to those who can explain it. The facts have been set out by every defence minister since 1994, by the chiefs of the defence force and by the service chiefs; and every defence debate since 1995 has produced cross-party support for proper defence funding.

Yet the cabinet continues to allow the defence force to decline while nevertheless expecting it to do its job: border patrols, support for the police, peacekeeping in the DRC (and in Burundi and Darfur before) and crisis response (in Comoros in 2006, Bangui in 2013 and now in Mozambique).

And this is the country with the second-largest economy in Africa, which likes to believe it is a leader and wants to speak for Africa in international bodies — lots of bark but very little bite, and very soon no bite at all.

Underfunded defence force will be able to head off some challenges with good, timely intelligence and focused quick response
Opinion
10 months ago

HELMOED RÖMER HEITMAN: Mr Cele, get rid of your guards if you want us to ditch our guns