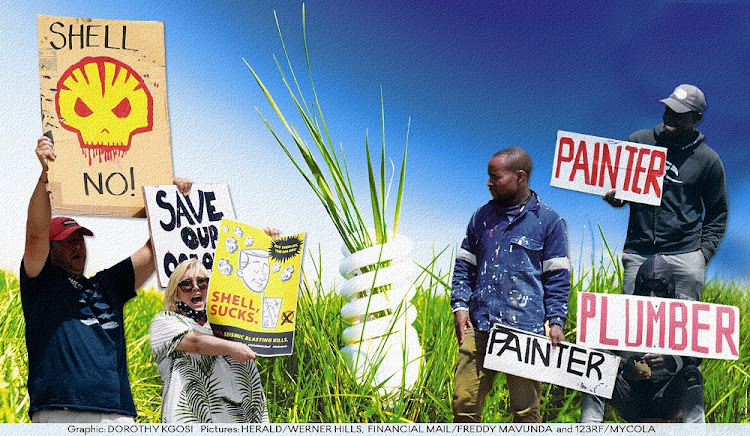 We do not doubt that many (organic) champagne corks were popped in January when Shell’s seismic exploratory vessel departed SA’s Wild Coast with its anchor between its legs.

This court victory followed an impressive lobbying campaign by assorted environmental groups, who then delighted in turning their attention to a similar project off the West Coast.

The COP26 conference in Glasgow has demonstrated the fashionable Brownie (Greenie?) points that are awarded to environmental groups and their supporters, who jetted into the Scottish city in their scores — spewing aircraft exhaust fumes and emitting tonnes of CO2 — to wildly wave the green flag.

Eccentric royals rubbed shoulders with Hollywood A-listers, preening politicians and at least one noisy Scandinavian schoolgirl. Even US President Joe Biden was there, making headlines for all the wrong reasons — he let off a noisy fart in the presence of the Duchess of Cornwall — adding his own modest contribution to the methane pollution threat facing our planet.

Against such a vocal global movement it is difficult for the voice of business, or the logic of economics, to be heard. Of course, offshore oil and gas exploration is going to cause some harm to the environment, but what economic activity can ever be described as totally harmless? Merely laying a railway line or running a diesel delivery vehicle has some detrimental environmental effect.

While the eviction of the Shell ship and halting of the West Coast seismic survey have been sold in the dominant narrative as victories, we argue they amount to an economic disaster for SA. This country is experiencing an anaemic growth rate that is coupled with the world’s worst unemployment rate — a toxic cocktail that is producing poverty, inequality and social unrest.

Add the effect of the Covid-19 pandemic, amplified by extreme measures imposed by the diktats of the sinister national coronavirus command council, and you have a recipe for further misery, unemployment and despair.

It may give some a warm green glow to believe they are protecting the environment from each and every disturbance, but the seismic surveys Shell and Searcher wanted to conduct were not happening on a whim, or under the sole supervision of the captain and his crew.

This sort of activity requires regulatory approvals and monitoring, and those carrying it out need to convince the authorities they will cause a minimum of permanent harm to the oceanic ecosystem. Shell had gone according to the book in applying and receiving approval for its surveying operations before they were halted by a court order.

But beware. There is a real economic price to pay every time exploration is outlawed — be it seismic surveying or fracking. The search for minerals and resources will inevitably have an environmental footprint. This is indisputable, and we have little choice but to accept it. However, you always need a sense of perspective, a sense of balance, and the economy — and ordinary people on the ground — will suffer badly if everything is seen exclusively through a pair of green-tinted spectacles.

Lives and fuel would certainly be saved if we introduced a 30km/h speed limit on all SA roads, for example, and the nation’s overall health would improve if alcohol and cigarettes are banned, or we were no longer allowed to eat meat or sweets. The environment would certainly benefit if all factories and power stations were shut down so they can no longer pollute the environment.

But this clearly isn’t going to happen because of the huge and obvious effect it would have on the economy, jobs, and the morale and happiness of the SA population. Before we hanker for the era of the cavemen, we might want to consider their health and life expectancy, not to mention the lack of smartphones and KFC.

The green paradise sought by some is an economic nightmare for the rest of us. Let us therefore see those with an interest in a growing economy, in less unemployment and squalor, emerge from the shadows. The green movement has an important role to play and has become a force to be reckoned with in maintaining checks and balances, but it must not be allowed to win by default.

Just as it was vital in the last century to combat fascism, communism and apartheid, so we must not now allow green-tinged fanatics to drown out common sense. Politicians, civil society and businesses must speak out more forcefully and more clearly against the authoritarian menaces who prefer extreme poverty and hunger to (some) pollution, who favour self-flagellation to people enjoying life responsibly.

The nonprofit organisations (NPOs) that agitate most aggressively on environmental issues in SA often seem to be as focused on creating lucrative jobs for their own teams as on contributing to real economic activity and improving people’s lives. They may not make a profit, but the already well-off individuals who found and work for them do, as do many of those who fund such NPOs and encourage their style of activism.

It has been encouraging to see mineral resources & energy minister Gwede Mantashe speaking out more forcefully and engaging coastal communities, arguing the very sound case for controlled seismic exploration of the seas, and other exploration. Let us hope his cabinet colleagues will show the same resolution, especially trade, industry & competition minister Ebrahim Patel, who speaks so often of the need for investment in our economy and needs to be more visible on this economically vital issue. After all, the discovery and development of new gas fields form a vital element in the government’s energy transition strategy.

Instead of shutting down offshore exploration and the development of the known vast gas reserves under the Karoo, the business and economic case need to be better made, more often and with real passion. Let the environmentalists protest, chant and agitate. They have many valid arguments that can and must be considered when the pros and cons of economic activity are weighed up.

But we cannot allow them to dominate to the detriment of the majority, especially those whose agendas are explicitly antigrowth and anti-employment. Often they are funded by those who stand to gain by not having SA products to compete with, or by protecting long-established industries. Whatever the motivation, their success comes at the cost of continuing poverty and social instability.

It is time for those who understand the economic forces at play to make a rallying call for balance and reason, for debate rather than the wanton destruction of potential. If this sometimes means the “greenies” are shown the red card and toss their toys, that is a price we should be more than willing to pay.

• Schussler heads Economists.co.za, and Fraser is a business journalist.

Judge Gerald Bloem said it seems mining minister Gwede Mantashe has “made up his mind” in support of Shell. Which looks bad, given a R15m donation to ...
Opinion
5 months ago
Next Article