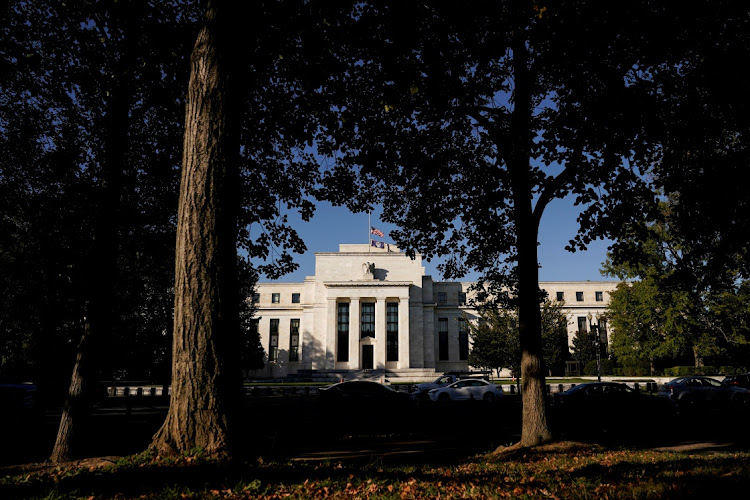 The Federal Reserve building is seen in Washington, US. Picture: REUTERS/JOSHUA ROBERTS

London — If the world’s big central banks are convinced the economic emergency is over and policy should start to return to pre-pandemic settings, the European Central Bank (ECB) is likely to beat the US Federal Reserve (Fed) to it.

Facing the highest inflation rates in decades, caused mainly by the distortions and bottlenecks related to rapidly reopening economies after serial Covid-19 lockdowns, central banks fear those rates will be slower to subside than first thought.

The Omicron wave around the end of 2021 again muddied the economic picture and could prolong supply chain and labour market distortions that keep inflation rates higher for longer, as well as raising the risk of them becoming embedded in household, worker and company expectations.

If in doubt, the message seems to be, stop adding stimulus, return to square one and assess the lay of the land.

Fed officials have entered 2022 with all guns blazing. Most now insist they will not only stop buying new bonds by March, but the first of at least three interest rate rises in 2022 will come at that point and unwinding of the Fed’s bloated balance sheet commence shortly after.

Fed chair Jerome Powell spoke on Tuesday of “normalising” policy while being “humble and nimble”.

While the picture for the ECB is different, it faces a similar inflation and communications headache and the message from its top officials is one of both caution over inflation risks and a restatement of its central price stability mandate.

ECB chief economist Philip Lane said this week he still sees inflation back below the 2% target in 2023 and 2024, while its president, Christine Lagarde, spoke on Tuesday of an “unwavering” commitment to stable prices and new Bundesbank boss Joachim Nagel said he sees a “danger” if inflation stays high.

For many in the markets, faced with a more modest economic rebound, higher jobless levels, lingering credit problems and ageing demographics that threatened deflation for a decade, the ECB will be deeply dovish for far longer than the Fed.

An almost 10% swoon in the euro-dollar currency rate in the second half of 2021 illustrates some of that.

ECB policy rates and long-term benchmark sovereign bond yields were negative pre-pandemic and remain so. And the size of its accumulated balance sheet is both higher than the Fed’s in nominal terms as well as being, at more than 65%, almost twice the share of GDP than Washington’s.

But as UniCredit economist Marco Valli points out, much of the ECB’s stance was in place before the pandemic.

“When the different starting points of monetary policy are taken into account, the ECB's stance looks less dovish than generally thought,” he wrote.

Valli reckons that based on its December 16 decisions — which aims to wind down emergency pandemic bond buying stimulus by March, end new special lending facilities by June and taper long-standing asset purchases to pre-Covid-19 levels by the fourth quarter, the ECB would be back to pre-pandemic settings by October, a year ahead of the Fed on existing plans.

Of course, the Fed cut its policy interest rate by more than 150 basis points and revamped its net bond buying from scratch when Covid-19 hit. The ECB by contrast relied mostly on the PEPP bond purchase programme as its key support flooring long-term interest rates. Its repo rate was already at 0% since 2016 and its deposit rate had already been cut to the current -0.5% in 2019.

But Valli says it is still worth noting that the ECB will be back to pre-Covid levels long before the Fed despite fewer labour market distortions feeding wages, less exchange rate weakness on import prices and less concern over equity valuations.

Either the Fed has been too slow to normalise — and judging by its frantic speechifying in 2022, some Fed officials appear to think that — or the ECB is being too cautious.

Market pricing for a small 10bp rise in ECB deposit rates by year-end still seems excessive to most economists.

Deutsche Bank’s “House View” published on Tuesday says this “lift-off” is unlikely until 2023, but it sees net asset purchases dropping by about 70% in 2022.

On the flip side, even if the Fed were to hike rates four times in 2022, as market pricing now suggests, it would still leave them well below pre-pandemic levels.

A rapid wind-down of the Fed’s balance sheet in 2022 might even up the relative stances somewhat as shrinking the ECB’s appears a much longer way off. But the Fed’s Powell said on Tuesday that no decision on that had been taken yet.

So while the ECB may seem more of a tortoise to the hare-like Fed, it may also find it wins the race. Whether that’s a good result for the eurozone economy is less clear.

The persistence of distortions to trade, labour markets, retail prices and spending and saving habits mean fundamentals are still impossible to assess
Opinion
7 months ago

While investors are eyeing 2022, a restive dollar is stirring up trouble
Opinion
8 months ago