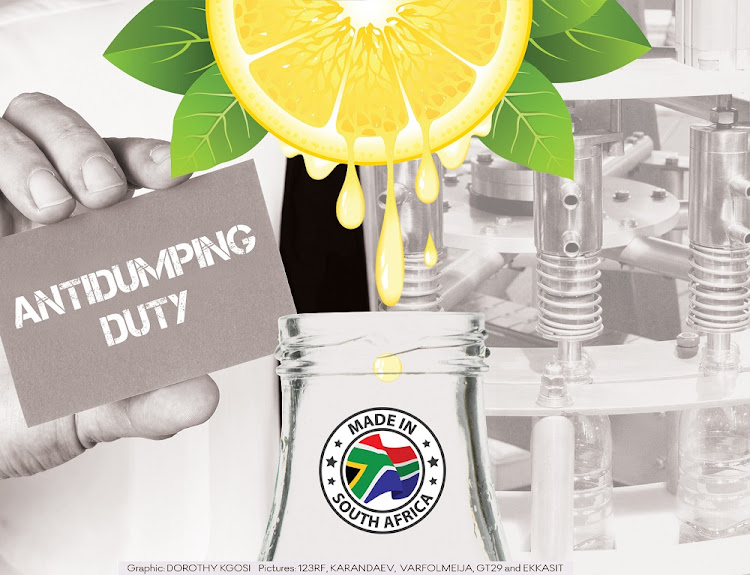 Landing with a loud splash in our collective morning coffee on December 29, US fruit juice manufacturer Ventura Coastal filed an antidumping application against lemon juice from SA. We exported R165m worth of lemon juice to the US in 2021, up 61% from R102m in 2018. As the US is our largest export market for lemon juice, this is not trivial.

The Americans are asking for a 128.61% antidumping duty, which if imposed will remove SA from that huge market. The 31-million litres of lemon juice it sells to the US will have to find a new home, or be sold locally, but either way prices will drop. If this volume suddenly arrives in a new market that has domestic lemon juice production, there is a good chance of antidumping investigations in those new markets too. In the highly protectionist world we now live in, antidumping duties travel around the globe almost as fast as Covid-19.

Meanwhile, arbitration has finally started on SA’s bilateral safeguard duties on frozen bone-in chicken from the EU. This dispute with our largest trading partner is to be taken very seriously indeed, even though it affects less than 2% of the SA bone-in chicken market. The EU accounts for 20% of our exports and we account for 0.5% of its imports, up significantly from 0.38% only because of the increase in commodity prices.

We should be exporting more to the EU. That we are not is partly due to the safeguard duties, which were always legally dubious. The duties were a political action, having barely any effect on the market yet fought for to the death as other sectors pay the price. Our steel remains subject to a safeguard duty in the EU when we could have argued for exemption. And we have done little to get our heated chicken into the EU, though we complain endlessly about European exports of chicken to SA.

Our relationship with the EU is strained, no matter what is admitted to by either the European or SA officials. And trade policy has become politicised to such a degree that it is no longer clear what role the International Trade Administration Commission (Itac) still plays — other than to expertly swing the rubber stamp on to whatever decision is required by trade, industry & competition minister Ebrahim Patel.

None of this is helped by the worrying shift from experts analysing and arguing cases to this space being taken over by corporate propagandists. The local chicken industry figured out the benefits of using lobbyists to spin their cases in the media, to great effect. I blame Donald Trump, who glamorised balderdash and made trade wars sexy. Only we aren’t the US, and the EU is losing patience with us.

It is clear that the government’s localisation policy will be implemented with even greater vigour in the coming year. Designation (forcing government departments to buy local) will accelerate. We saw cement designated at end-2021 and this list of 28 sectors will grow (I predict chicken to be on this list before the middle of 2022). Designation legislation has been around since 2008, but was mostly ignored until recently. With Patel in charge and the economy in the doldrums, we will see more aggressive implementation.

But, just like BEE, this will be increasingly difficult to do at scale. I think we will see some sort of grading and certification system being considered. Along with your broad-based BEE certificate, you will need to deliver a localisation certificate confirming your local content. And lest you think this is a fever dream, in 2015 already 50 CEOs consented to opening their supply chain to government inspection under a “local procurement accord”.

Litigation will increase as the localisation policies are implemented as if they were law (unlike the last 13 years, during which they have been ignored) with the legal challenges centred on the badly flawed process. Localisation remains fundamentally a club activity, and for those who are not members, the process is opaque and inaccessible. The lack of transparency and meaningful participation makes everything legally questionable. But this won’t change until the court cases have been completed. The small number of big winners love the system (for now), and the losers, which are many, will truly feel the bite.

Because the winners are so obvious and the cost is socialised across the great unwashed, it’s easy to tout localisation as a success, but the underlying numbers say otherwise. Per capita GDP growth is down from an average of 3.47% per annum between 1994 and 2007 to 1.83% between 2007 and 2019 (and down further to 0.89% if we count 2020). Localisation formally began under Rob Davies in 2007. And then there is unemployment. Eish. Doing more of the same thing, only more aggressively, doesn’t turn it into a good idea.

Despite export duties being levied on scrap metal on top of the preferential pricing system (PPS) being a terrible idea, we will see more export duties being considered. Having both export duties and PPS costs the recycling sector more than R300m per annum for no benefit to anyone else, yet both are in place and the government is aware of the negative effect.

The structure to implement export duties is now there though, and the obvious next target is chrome ore (because irritating our largest trading partner is not enough; we now also need to go after our second-largest, China). Depending on the iron ore price and how loudly ArcelorMittal complains, we may see export duties being attempted on iron ore too.

Capital has been, and will continue to be, poorly allocated to failing sectors, starving industries with far greater potential. So much money has been “invested” by the Industrial Development Corporation (IDC) in steel mini-mills, with disastrous outcomes, yet even more protection is to be given to them, further distorting investment incentives.

Look at Cisco, a scrap steel recycling mill in Cape Town, which seems to have been the motivation for the PPS in the scrap sector but which then cost the IDC hundreds of millions of rand and is yet to turn a profit. Cisco has just been sold by business rescue practitioners, with the IDC taking a haircut of more than R200m in the process (it is not clear if payment has been received yet).

I know this feels good if you are a local manufacturer, but none of it is a free lunch. Before you can get duties increased you will need to sign a binding agreement, committing you to certain actions (such as investment and employment). This is already happening, even when duties are rebated on goods not made locally.

With every morsel you accept, you bind yourself ever more tightly to the hope that this one time, the government will get it right; that in 2022 you will be the special exception to the normally disastrous policies implemented on the rest of us.

The localisation drive has forced firms that cannot directly source inputs locally to buy them through local middlemen, who then add their own mark-up
Opinion
7 months ago

Africa is slowly moving towards continental integration, a wise move in the light of US-China tensions
Opinion
7 months ago

With stratospheric unemployment and a deaf government, things can only get better if the party goes
Opinion
8 months ago
Next Article