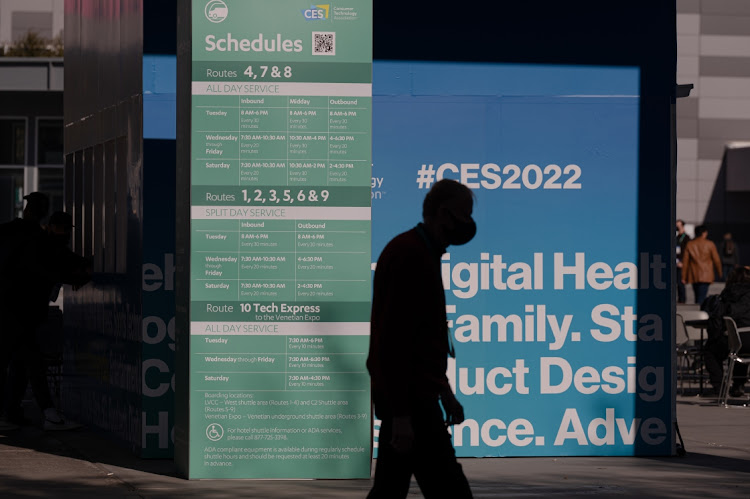 The CES 2022 technology conference schedule posted outside the Las Vegas Convention Center during the trade show in Las Vegas, Nevada, US, on January 5, 2022. Picture: BLOOMBERG/BRIDGET BENNETT

In 2022, the digital technologies that are already transforming our lives, in many ways for the better, will expose new vulnerabilities in our lives and societies. Algorithms created with biased data will make destructive decisions that affect how billions of people live and work. Online mobs will incite violence. Bad information will move stock markets. Conspiracy theories will distort the opinions of millions of people. Hackers will steal information about you.

All of these threats will grow larger in digital space, where the world’s largest tech companies, not governments, set the rules.

This is a new development. For nearly four centuries, nation-states have drawn the boundaries and enforced the rules that govern our societies and our lives. But the world’s largest technology firms are now designing, building and managing an entirely new dimension of geopolitics, economics and social interaction. They’re writing the algorithms that decide what people see and hear, determine our economic and personal opportunities, and influence the way we think.

Important parts of our daily lives, and even some essential functions of the state, increasingly exist in the digital world, and the future is being shaped by tech companies that are neither willing nor able to effectively govern society. Individuals will spend more time in digital space in 2022, at work and at home, and even in the “metaverse” — an emerging, more immersive version of the web where all the problems of digital governance will be magnified. The metaverse, in turn, will rely increasingly over time on economic systems based on decentralised blockchain platforms that governments are already struggling to control.

Governments are trying to push back. The EU will pass new laws in 2022 that limit some practices by big tech. US regulators will advance antitrust cases and start the lengthy and contentious process of writing new rules for digital privacy. China will continue to pressure its tech companies to align with national priorities determined by the state. Other governments will restrict the kinds of data that can cross borders.

But these are regulatory tactics, not strategy, and no government will challenge big tech’s massive profits and influence any time soon. Nor will political officials limit the biggest platforms’ ability to invest profits in the digital sphere where they, not governments, remain the primary architects, actors and enforcers.

This isn’t just a US or Western challenge. It’s an issue for the developing world, where governments face even starker trade-offs between access to the digital services required to capture economic opportunities in the 21st century and the risks posed by poor cybersecurity and viral disinformation.

China is not immune to the challenges of this brave new digital world. Yes, China has the world’s most sophisticated internet firewall and surveillance apparatus, and President Xi Jinping hasn’t hesitated to crack down on companies he thinks are getting too big. But the Chinese Communist Party needs robust and resilient economic growth to sustain its monopoly hold on domestic political power. If Xi clamps down too hard on the most entrepreneurial and capable of China’s tech pioneers and private sector companies, China won’t be able to develop the digital infrastructure needed to boost productivity and living standards over the long term. In many cases, the very companies Beijing sees as potential threats to the regime are also indispensable pillars of its economy — a core dilemma for any country, democracy or police state.

There is already a lack of global leadership in today’s world. There is no single government or durable alliance of governments that is willing and able to manage the growing number of global problems we already face — pandemic response, climate change, conflict resolution, and co-ordinated care for the world’s migrants and refugees. But digital space is even more poorly governed. The tech giants are like developing countries that lack the governing institutions to match their political power. Like a country with surging economic growth that can’t yet educate its citizens or keep them safe, big tech firms have neither the capacity nor the willingness to govern the new spaces and tools they are creating.

Ineffective governance by tech giants will impose costs on society and business. Disinformation will get worse ahead of the 2022 US midterm elections, further undermining American faith in the democratic process. And as tech firms and governments fail to unite around the governance of data privacy, the safe and ethical use of artificial intelligence, and cybersecurity, US-China tensions on these issues will grow, and US-Europe efforts to find common ground will fall short.

With no countries — or companies — capable of crafting effective solutions to global problems, the credibility of governments will further erode, further fraying the social contract.  This is today’s techno-polar world.

• Bremmer is the president of Eurasia Group and GZERO Media and author of ‘Us vs Them: The Failure of Globalism’.

KATE THOMPSON DAVY: If a Martian asks: take me to your ruler, you may have to ...

KATE THOMPSON DAVY: If a Martian asks: take me to your ruler, you may have to ...