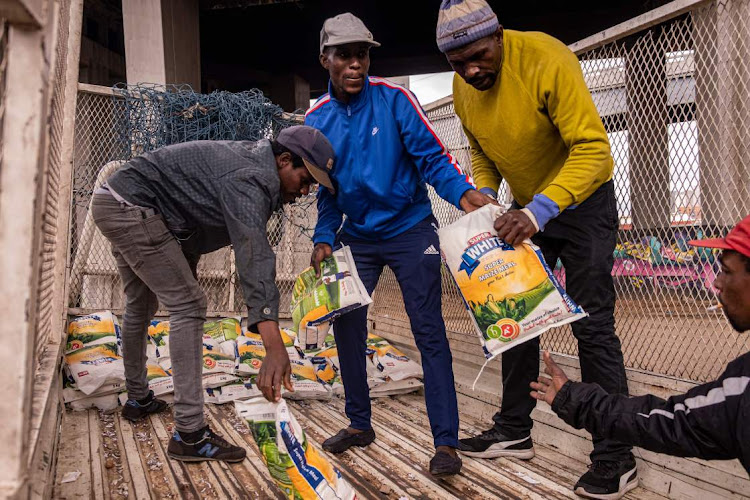 One of the UN’s Sustainable Development Goals (SDGs) is to halve per-capita global food waste by 2030 at the manufacturing and retail levels and reduce food losses along production and supply chains, including postharvest losses.

This is to tackle household hunger at global, national and household levels, which in 2020 is estimated by the Food and Agriculture Organisation (FAO) to have affected between 720-million and 811-million people — about 118-million more people than in 2019.

Food insecurity, particularly in SA and Africa, comes as the world continues to battle against the effects of the Covid-19 pandemic, which is throttling many economies and threatening the already volatile food systems, where millions go to bed hungry.

Hunger is still a universal problem confronting most of humanity. The statistics on food loss and waste in SA are alarming and worrisome: about 60% of households are food insecure (30% at risk of and 31% experiencing hunger), and more than 13-million children live in poverty. As many as 14-million people in SA go to bed hungry every night.

It is particularly worrying that about 10.3-million tonnes of food, a third of the available food, is wasted per year in SA.

In addition, food loss and waste has a significant effect on the environment due to methane gas produced when food spoils, while precious resources such as water, labour and energy are wasted and biodiversity is affected. If food wastage were a country, it would be the world’s third-largest greenhouse gas-emitting country. This is unsustainable.

In a country facing worsening household hunger, made worse by the Covid-19 pandemic, which has affected the most vulnerable and poor families, we cannot continue to allow this monumental unnecessary food loss and waste, and practical steps are needed to address the situation. Reducing food loss and waste has become a moral and food security imperative requiring a collaborative approach by all involved in the food value chain: from farmers and manufacturers, to retailers and policymakers.

In response to this urgent challenge, the Consumer Goods Council of SA (CGCSA) launched the Food Loss and Waste Voluntary Agreement on September 29 2020, a public, collaborative declaration of intent to reduce food loss and waste and redistribute nutritious surplus food.

The agreement was led by the CGCSA, in partnership with the national departments of forestry, fisheries & environment; and trade, industry & competition. It commits food manufacturers and retailers to reducing food waste to achieve the UN’s SDG to halve per-capita global food waste by 2030 at the manufacturing and retail levels and reduce food losses along production and supply chains, including postharvest losses.

As SA’s retailers sell about 80% of the food consumed in the country, they sit at a critical point in the value chain to influence changes to reduce some of the food wasted annually. Signatories to the voluntary agreement will be obligated to report their food waste savings and achievements to illustrate how the food sector is working collectively towards achieving the UN goal.

The agreement focuses on food-waste minimisation (stopping it arising in the first place), and when food surplus and waste does arise, to identify solutions to eliminate food going to landfill. This is by identifying the following solutions:

Through working group discussions, it has been agreed that a food donation guideline or standard is essential. A legal framework is now needed from the government to protect food donors, which, if enacted, could cause donations and surplus food redistribution to be enhanced for companies who still fear reputational damage through donations.

While we call for a review of the existing legislative framework governing food donations and donor liability, the retail food manufacturing and retail sector, working through the CGCSA, will finalise guidelines that will support food donors with principles to follow to allow more surplus food still safe for human consumption to be safely donated to needy people.

The review of legislation being conducted by government departments will help identify legislation that hinders or enables food waste minimisation, beneficiation and donation.

Surplus food remains a critical aspect of food security and this was evident during the recent civil unrest, during which the CGCSA collaborated with members to redistribute surplus food due to disrupted supply chains. Through product, transport and logistics support from its members and stakeholders, as well as funding from Minerals Council SA, the CGCSA was able to provide 12,000 product hampers to vulnerable people in KwaZulu-Natal and Gauteng.

Furthermore, one frail-care, three children’s homes and an NGO assisting raped and sexually abused children benefited from this initiative. Food that could not be distributed due to disruption was redistributed to several NGOs around Gauteng and KwaZulu-Natal. These could have been discarded or sent to landfill.

We are excited about the next phase of this important project, which includes bringing more members and non-members on board to ensure we achieve our national goals of reducing food loss and waste by 2030. The more signatories we have, the stronger we are together in achieving the reduction target, fighting food insecurity, reducing environmental affect and saving money and resources.

We need sustainable, climate-friendly agricultural methods to achieve food and nutrition security supported by policy interventions. More sustainable agricultural policies and methods and responsible consumption of agricultural produce could cause better food and nutrition security. It will require greater collaboration between the private sector and the government if SA is to achieve food self-sufficiency at household level, including aligning food supply with demand to reduce waste at source, on farms, in factories and in households.  Therefore, tackling food loss and waste is a major challenge that has become more urgent in SA and Africa where so many people still go hungry.

For more information about the voluntary agreement visit the CGCSA website.

• Setati is food safety initiative executive at the Consumer Goods Council of SA.

Not going to eat that? How surplus food should be redirected to the poor

Not going to eat that? How surplus food should be redirected to the poor