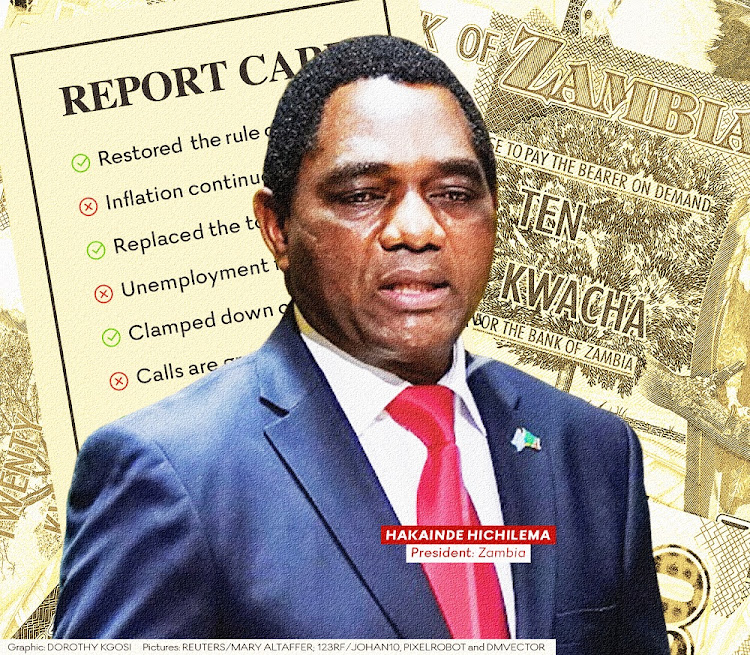 Report cards for Zambian President Hakainde Hichilema’s first 100 days are coming in thick and fast. Most agree that it is a mixed record. He has managed to restore the rule of law quickly, replaced the top military and police officials, clamped down on party cadres and reversed decisions against free speech and a free media. In other areas he has some way to go.

In fairness, “HH”, as he is more widely known, has one helluva job to do. He inherited a bankrupt state with debts of more than $14bn, owed primarily to Eurobond holders, multilateral institutions and China. China’s lending to Zambia was particularly opaque under the Patriotic Front, but recent reports from the China Africa Research Initiative (CARI) suggest Zambia’s debt to Chinese public and private lenders is $6.6bn, twice the official figure previously disclosed.

The president is also negotiating a hefty bailout package with the IMF. Over the weekend they announced a “staff level” agreement on a $1.4bn, three-year extended credit facility, the terms of which still need to be clarified. What we do know is that the Zambian government will need to “undertake bold and ambitious economic reforms,” according to Allison Holland, IMF mission chief for Zambia.

Meanwhile, HH has managed to stabilise the kwacha and reinstate previously ousted Bank of Zambia governor Denny Kalyalya, but inflation continues to rise and unemployment figures are still very high. Calls are growing louder to cancel fuel and electricity subsidies, but that would cause a spike in household spending that the electorate would find hard to tolerate.

Further austerity measures under an IMF package might also be too much to bear. Last week the central bank raised interest rates for the second time this year by 50 basis points to 9%, to try to “contain inflation that’s still nearly triple the targeted rate”.

Calls are growing louder to cancel fuel and electricity subsidies, but that would cause an immediate spike in household spending that the electorate would find hard to tolerate

Then there is the extra pressure of finding where the money went under former president Edgar Lungu’s rule. Just a few weeks ago Africa Confidential reported that the $40m advance from the last-minute sale of part of Konkola Copper Mines (KCM) to Trafigura has disappeared.

Probably HH’s most difficult task is withstanding the pressure from party loyalists and voters to act quickly. They want him to hunt down those who stole so shamelessly from the state and bring them before the courts. And, ironically, they want a piece of the pie as well.

According to a recent analysis by risk advisory firm Pangea-Risk, there are worrying signs that patience is wearing thin. Several of his political backers have been angling for better ministerial positions and there are reports that members of the governing United Party for National Development (UPND) have been trying to leverage HH’s presidency as an opportunity for embezzlement and fraud.

The most recent example is the apparent award of a $50m fertiliser supply contract to Maurice Jangulo, husband of a UPND minister, without a public procurement process. Corruption in the agricultural sector has a direct impact on small-scale farmers and rural Zambia, which forms the bulk of HH’s support base. It would also send the wrong message: that rooting out corruption under Lungu and the Patriotic Front is just an opportunity to reward the new “sheriffs in town”.

HH is sensitive to his supporters’ impatience, but he is also standing his ground. Last week, at the swearing-in of permanent secretaries, a high court Judge and the commissioner of lands, the president noted that “some Zambians are accusing him of talking too much instead of recovering stolen money”.

His party wants him to make good on his parliamentary commitment to “introduce specialised mechanisms to fast-track the recovery of stolen assets, as well as courts, focused on corruption and economic crimes”.

Maintaining the president’s anticorruption agenda might be harder going than previously thought. It wouldn’t be the first time. It is surprisingly difficult to keep an anticorruption campaign clean. Just look at what is happening in SA as it seeks to root out state capture through an openly political commission of inquiry.

Or Slovakia, where the liberal use of dubious plea bargain testimonies suggests that a government elected solely on an anticorruption platform needs to show progress at all costs. Or Brazil’s Lava Jato campaign. The list goes on.

There is a zeal to anticorruption campaigns that sometimes go sour. They tend to abuse the special powers extended to them, including legal procedures, to hunt down “political enemies of the state”, and often fall victim to the same temptations they are meant to be rooting out.

HH knows only too well what it means to fall victim to political persecution. He was arrested more than a dozen times before coming to power. Which would explain why he instructed his newly appointed police inspector and heads of the security forces that “no-one should be arrested before investigations are concluded”. Protecting the rule of law is deeply personal for him.

The rule of law is also crucial in reforming Zambia’s economy. HH told the Financial Times last month that “the treasury we inherited was completely empty”. This leaves him with little room for manoeuvre. So, in addition to the IMF package he must turn to international investors, especially those in the mining sector, for help.

Mining is still central to Zambia’s growth and stability, even more so as the green energy agenda moves forward and relies on battery minerals such as copper. The government recognises this too. Finance minister Situmbeko Musokotwane’s first budget speech signalled that the country is looking to encourage investment back into the country by announcing royalty tax breaks for miners.

However, if Zambia once again falls prey to the type of state corruption that we have seen over the past decade investment will be slow to follow. Investors will be on their guard.

• Wolfe, an international lawyer, is MD of Marlow Strategy.

ELTON DORKIN: Covid-19 is not only about you, it’s about every human being — get vaccinated

The choice is inherently communal: my individual health choice either reduces or increases the burden on the country’s health system; it either ...
Opinion
8 months ago

The country’s president persistently orders his officials to do what they advise against, thus the plunge in the lira
Opinion
8 months ago