The medium-term budget policy statement represents an important victory for prudent macroeconomic management over the enormous pressure exerted on the National Treasury and the cabinet to commit to higher levels of spending.

That pressure emanated from a curious — some would say, fraternal — alliance between certain left-wing think-tanks and the former managing partner of Goldman Sachs’s office in SA, Colin Coleman.

This was a co-ordinated campaign to persuade the government to ignore previous commitments to fiscal consolidation and commit to providing a basic income grant to much of the population.

The argument for doing this was straightforward: SA has an exceptionally high poverty rate, and providing cash transfers to poor or all adults would immediately alleviate this. Concerns about fiscal sustainability are overblown, they argued, and it is possible and desirable to finance a basic income grant through a combination of higher taxes and even more borrowing.

These arguments are wrong, and the government was correct to ignore them. Government debt in SA, now estimated at just less than 70% of GDP after Stats SA’s revised estimates of the size of the economy, has been on a steep upward trajectory since 2008. Over the past 13 years the outstanding stock of debt has increased sevenfold.

SA’s growth rate is low, and the cost of government debt is high. Unless and until this changes the only way to stabilise the debt as a percentage of GDP is through fiscal consolidation.

A state that cannot maintain a monopoly on the use of violence, that has an entrenched culture of corruption, and that also wants to open the spending taps, will not enjoy the confidence of investors

The Treasury understands this. However, its critics fail to recognise that SA’s position differs fundamentally from that of most of the world, where growth rates are higher than the effective interest rate on government debt.

The Treasury’s critics do appreciate that we cannot resolve the debt problem without growth. But they argue that spending more money now, even if it leads to increased debt, is the secret to unlocking the necessary growth.

Proponents of a borrow-to-grow strategy dramatically underestimate how demanding these two conditions are in a context in which the differential between GDP growth and yields on the government’s 10-year bonds, the level of which is set in the market and reflects the riskiness and sustainability of public debt, averaged nearly four percentage points in the three years before the Covid-19 crisis. 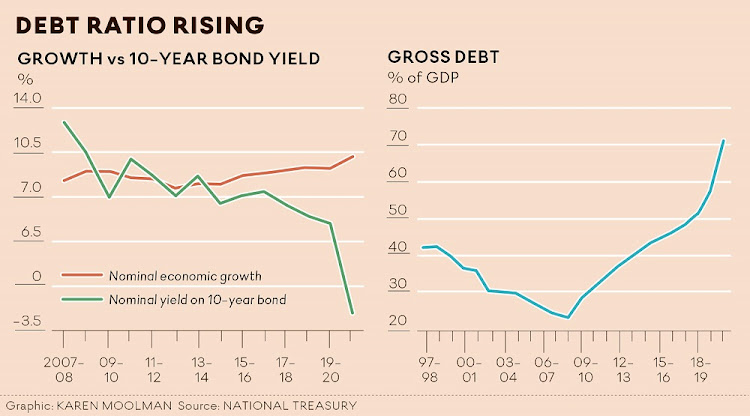 Without setting it out as explicitly as this, the medium-term budget policy statement recognised the mathematical impossibility of this approach to fiscal sustainability. It made other critical points too. It noted, for example, that debt service costs — projected to grow at nearly 11% a year over the next three years, and which exceed spending on social grants — are crowding out an ever-larger amount of more useful spending on education, infrastructure, health care and social grants.

It notes also that government indebtedness has raised the cost of capital across the economy and crowded out investment spending in the private sector. The degree to which this has happened is all the more evident after Stats SA’s GDP revisions, with its data now showing that gross fixed-capital formation is less than 15% of GDP, compared with the NDP’s target of 30%.

These are the principal reasons why a strategy of borrow-to-grow will generate explosive increases in the debt ratio, and this is in itself reason enough to commit to the far more prudent path set out in the medium-term budget policy statement. But there is yet another reason: the explosive rise in the debt ratio since 2009 has coincided with, and is reflective of, a catastrophic collapse in the quality of governance.

This is the critical context for understanding the increase in indebtedness and the way the rise in indebtedness informs decision-making by the private sector. It would be one thing if the rise in debt were a consequence of a drive to invest heavily in the economy. However, it is quite another when the rise in debt was accompanied by a fall in investment spending and, critically, when a large fraction of investment spending was stolen or wasted.

The rise in debt thus has to be understood not “just” as a weakening of public finances, but as a reflection and symptom of poor governance. It is therefore unsurprising that the issuance of new debt has been accompanied by a large and rising risk premium, one that reflects concern that the decisions that are needed to drive growth or contain debt may never be taken.

One response to this concern could be that the quality of governance is improving in SA, that the current president is not a crook, and that he is trying to do the right thing by the country. Of course, there is merit to this argument. But there are also defects. The biggest is not that government agencies remain deeply corrupt (which is true), but that barely four months ago we faced an insurrection in which the state’s foundations were threatened but has generated little response from any of the law enforcement or security services.

A state that cannot maintain a monopoly on the use of violence, that has an entrenched culture of corruption, and that also wants to open the spending taps, will not enjoy the confidence of investors. It will therefore see borrowing costs rise if it seeks to issue more debt, and the gap between growth rates and interest rates will widen further.

It is here that the medium-term budget policy statement is perhaps at its weakest, because desirable as many of the reforms Operation Vulindlela is championing may be, the government lacks a compelling growth story. Implementing reforms is far more difficult and slower than announcing them, and the reforms themselves — apart from the increase in embedded generation limits to 100MW — are too modest to drive significant growth.

The medium-term budget policy statement does what work it can to help promote reform. But far more is needed from the rest of the government before we will see economic growth rise and the risk premium fall. SA desperately needs a compelling growth narrative, the centrepiece of which has to be much-improved governance: less corruption, vigorous pursuit of the state capture and insurrectionary gangs (which doubtless overlap), and far more evidence that policy (including fiscal policy) is becoming better, more predictable and sustainable.

These reforms would raise growth rates far more than many other reforms on the president’s list (such as auctioning off more spectrum, e-visas or the critical skills list) and they would also lower the cost of borrowing.

• Bernstein is executive director of the Centre for Development & Enterprise.

In making their decisions during a pandemic presidents have to consider more than just financial costs, writes Ismail Lagardien
Opinion
1 month ago

MONDLI GUNGUBELE: Full vaccination is the only alternative to lockdowns — there is no other way

Inoculation is our way back to normality, but only if we all do it
Opinion
1 month ago