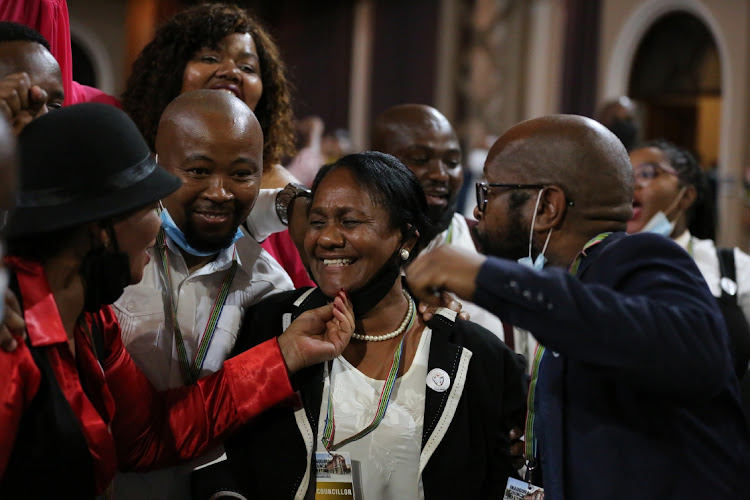 Eugene Johnson won the Nelson Mandela Metro mayoral seat by a margin of one vote, the smallest margin in the history of  Gqeberha. Johnson is a seasoned politician. She was a local councillor, served on the National Economic Development and Labour Council, worked as an aide to the ANC parliamentary caucus chief whip, and had an impressive trade union leadership stint during the height of apartheid.

However, even though Johnson is an experienced hand in both national and local politics, being in charge of a coalition government in Nelson Mandela Bay will be a monumental task. Residents in the city have been moving from disillusionment to outright resentment towards their local authorities. This is because the city had a torrid time with coalition governments under the UDM and DA over the past five years. Both the DA and UDM coalitions brought about major service delivery disruptions. It proved extremely hard for the DA’s Athol Trollop and the UDM’s Mongameli Bobani to build consensus among their coalition partners, leading eventually to both coalition governments collapsing.

Holding the past coalition government together will be difficult at best for both administrative and political reasons. Not only will the new mayor have to keep more political parties happy than her predecessors, but she is also inheriting a dysfunctional municipality, one that has been without a municipal manager for the better part of five years. Having said that, most would naturally expect the worst. However, all is not lost, and like Johnson said in her maiden address: “Hope is a good thing, maybe even the best of things, and no good thing ever dies.”

Johnson has both of these crucial success factors going for her. The ANC appears to have made a smarter move this time around; it negotiated with coalition partners around each organisation's strategic objectives. The Abantu Integrity Movement’s (AIM) Mkhuseli Jack ran on an “economic development ticket”, flaunting his experience as an entrepreneur. Having managed to secure the economic development & tourism portfolio, he will now need to put his money where his mouth is. GOOD’s Lawrence Troon wrote extensively on the topic of corruption and malfeasance in the city’s safety & security department. Now in charge of that department, he will have the opportunity to right the wrongs about which he so feverishly wrote.

The ANC, on the other hand, got its minority government and holds three of the four most powerful positions in that government. The executive mayor is the prime and most powerful position in the city, followed by a deputy mayor and chief whip. On the face of it, if all parties to the coalition have received what they wanted out of the coalition agreement,  Johnson should have a more positive experience.

Coalition governments will probably be with us for a long time, because the ANC’s political hegemony is slowly breaking and the DA is struggling to attract the support of the majority.

Let’s take a look at Sweden. Between 1905 and 1945, 23 of 29 governments were coalitions. But this long tradition does not mean the Swedes have perfected the art of coalition formation. After the Swedish elections of 2018 the country faced a major governance challenge because opposition political parties could not reach consensus on a power-sharing agreement. However, in the same year, on local government or subnational level, most Swedish local authorities were controlled by coalition governments. The difference between the two outcomes in Swedish politics comes down to political will rather than any structural or governance issues.

Unlike alliances that are formed before elections, coalitions are usually formed after an election to create a governing majority. Classical Coalition Theory suggests there are two main reasons why political parties would enter into coalition governments. The first is they want access to power to execute their political programmes. The second is that parties would form coalitions with each other based on ideological similarities.

The political leanings of all the ANC’s coalition partners are not dissimilar. With the exception of AIM, every other party in the coalition ran on the promise of pro-poor policies. GOOD, the Northern Alliance, the PAC, Defenders of the People (DOP) and the PIC are all sympathetic to the ANC’s ideological persuasions. Jack made his manifesto rest on promises of good governance, and Johnson said her ANC-led government would be tough on corruption “not only crushing corruption but rooting it out with vengeance”.

Coalition governments will probably be with us for a long time, because the ANC’s political hegemony is slowly breaking and the DA is struggling to attract the support of the majority. Our task now is to find ways in which we can ensure our cities, and perhaps even in future our country, functions well regardless of whether we have minority or majority governments.

To ensure this we need to build a stronger municipal bureaucracy that can absorb the turbulences of coalition forming and fallouts. Mashupye Herbert Maserumule, Renosi Mokate and Sibusiso Vil-Nkomo gave a strong argument for why this is important in a 2016 commentary on The Conversation.

Our political parties need to build a political terrain that will create institutions for how we negotiate for and govern through coalitions. Institutions refer to the “rules of the game” or standard unwritten rules and practices. Institutionalism is an established theoretical framework in the study of the political economy, and has proved helpful to economics in explaining complex social arrangements.  Such an approach will over time help all political actors to have more certainty.

Once everyone knows more or less what they can expect and what is expected of them in coalition negotiations, they will end up with fewer unrealistic demands and there will be fewer coalition governments collapsing as a result.

’• Dusty is a Masters candidate in finance and economics at the School of Oriental & African Studies, University of London.

In the absence of any coalition deals, simply by voting for the DA mayoral candidates, the EFF and Action SA have imposed their will on the DA
Opinion
5 months ago

The parties in municipal coalitions have little in common but need to work together on service delivery, writes John Dludlu
Opinion
5 months ago