The government withdraws its support for a young woman to participate in the Miss Universe contest in Israel, but says nothing about a South African Jew killed by terrorists 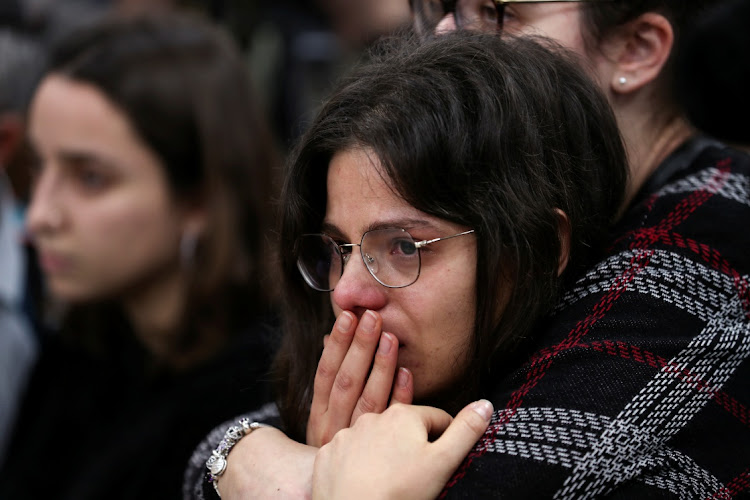 A woman mourns during the funeral of Eliyahu David Kay in Jerusalem on November 22 2021. Picture: REUTERS/RONEN ZVULUN

It was painful to watch videos of Palestinians celebrating the brutal death of a young South African, Eliyahu David Kay (26), who was killed in a recent terror attack in Jerusalem.

According to the SA Jewish Board of Deputies, Kay was a tour guide in Jerusalem and was killed by a Palestinian gunman while on his way to pray at the Western Wall (Kotel). Incredibly, Hamas alleges that Kay was an Afrikaner who came from SA to Palestine as a “coloniser”.

It is Hamas’ actions that cause Israel, the EU and the US to regard it as a terrorist group. Though the UK previously had a “no-contact policy” with Hamas, it is also considering declaring Hamas a terrorist group. It is likely that the UK will formally end relations with Hamas and that of its political wing after a debate on the matter on Friday.

“Hamas has the significant terrorist capability, including access to extensive and sophisticated weaponry as well as terrorist training facilities, and it has long been involved in terrorist violence,” UK home secretary Priti Patel said.

Despite its citizen being caught up in a bloody terror attack that also left three people injured, the SA government’s silence is puzzling to say the least.  Pretoria seems to be condoning terrorism as long as it comes from the Palestinians, who they see as their “brothers”.

As with any other country, SA’s foreign policy stance regarding Israel and Palestine is influenced by the history of the liberation movement in SA. The ANC considers Palestinians as oppressed and it sides with Palestinians even when they murder innocent people. This leads one to question whether it is a government in power or a freedom fighter organisation with a limited world view.

A hysterical SA government withdraws its support for a young woman to participate in the Miss Universe contest in Israel, but doesn't say a word about a South African Jew killed by terrorists. Surely there is something wrong with this?

If the department of arts & culture was able to withdraw its support for Miss SA for refusing to boycott the Miss Universe pageant because it’s held in Israel, then it should be easy for the same government to talk against a terror group that killed an SA citizen. Why do countries like the UK show concern about the killing of an innocent person while SA seemingly does not?

Other countries and organisations throughout the world condemn the Palestinian militant group because it is no different to terrorist groups such as Al-Qaeda or Boko Haram, with the same modus operandi.

From the ululation and celebration seen on the video after the brutal killing of Kay it is clear that there is a large number of people who claim to speak on behalf of Palestinians who are not pro-peace. In fact, these people are bent on the extermination of all Israelis. Is this what our government silently applauds?

We should be pragmatic, constructive and even-handed, and look for practical solutions to the Israel-Palestine political impasse. Killing, injuring, hurting or insulting one another will never solve the complex issues we face. Killing innocent people cannot be tolerated any more; there are other ways to confront problems in the Middle East.

One may be creating and sustaining a peaceful two-state solution. But that is the last thing Hamas, and by implication the SA government, seems to want. What message is this sending the Jewish population living in SA and contributing to its welfare?

SA has a chance to reset and review its Israel-Palestine bias. Our country should be working with genuine human rights activists and pro-peace activists from both states, rather than with people who are intent on Israel’s destruction. Ultimately, Israel is not going anywhere. It is time for our government to recognises this and start working towards finding a peaceful resolution to the conflict, rather than being part of the problem.

LETTER: Israel is an apartheid state — legally and in practice

LETTER: Israel is the least apartheid-like state in the Middle East

In reality, Israel is the least apartheid-like state in the Middle East and North Africa. It is the only state where minorities, women and gays are ...
Opinion
7 months ago

Having wrecked SA, the ANC is now in the process of destroying itself
Opinion
7 months ago
Next Article