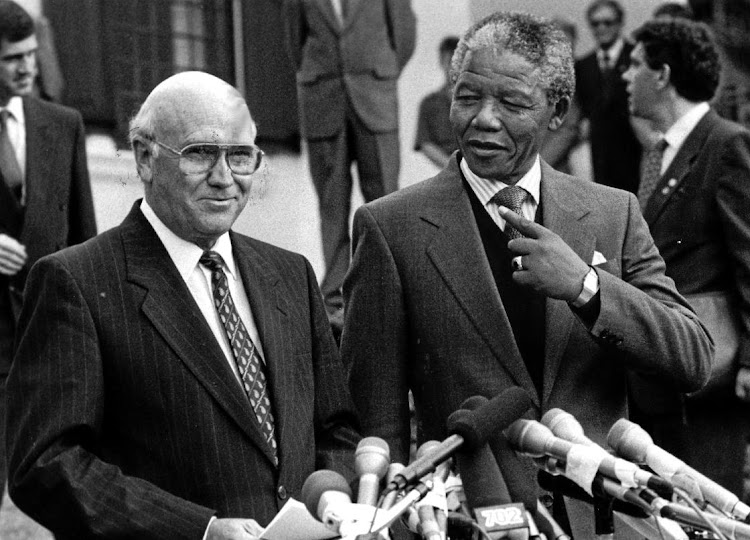 Former President F.W. de Klerk and Nelson Mandela during negotiations between the government and the ANC on May 6, 1990. Picture: SUNDAY TIMES

The death of FW de Klerk reignited the divisive debate over the former SA president’s complex legacy. Questions on De Klerk’s sincerity and motivation for his reforms began as he initiated the process that would eventually transform SA into a multiracial democracy.

My grandfather, Harry Schwarz, had to rapidly draw his own conclusions when asked by De Klerk in 1990 to serve as SA’s top diplomat to help market the process of democratisation.

“SA will never be the same again” my grandfather declared to his fellow opposition MPs as they left parliament on February 2, 1990. De Klerk had just announced a series of reforms that would release Nelson Mandela from prison and begin multiracial negotiations to end apartheid and introduce democracy. Later that day, De Klerk and my grandfather bumped into each other in the halls of parliament. “We must talk sometime” De Klerk told him.

This was an unusual suggestion from the president. My grandfather was an opposition leader in parliament and one of the National Party’s foremost critics. Several months later the suggestion resulted in a meeting where De Klerk asked my grandfather to assist the government in the process of political change.

De Klerk asked him to become SA's ambassador to the US, SA's top diplomatic position. Unlike previous offers from National Party leaders BJ Vorster and PW Botha to become a government minister, which my grandfather flat out rejected, De Klerk’s offer was given with the assurance that my grandfather would not have to defend apartheid legislation. He would also remain a member of the opposition Democratic Party.

His task was to market the process of democratisation abroad to enable the removal of crippling economic sanctions and renew deteriorating international relations.  Even after De Klerk’s assurances, my grandfather remained hesitant to place his trust in the leader of the political party that he had tirelessly campaigned against since its victory in the 1948 general election.

After debating the offer at length with his wife Annette, he sought the views of Nelson Mandela, a friend he had known since university. Mandela approved of the appointment, noting that it would be useful to have a sympathetic friend in the US. He also consulted Communist Party leader Joe Slovo, who also approved. Slovo joked to him that “all diplomatic appointments from now on require the approval of the Communist Party”.

My grandfather eventually accepted De Klerk’s offer. The appointment was heralded by SA and international media as a further demonstration of De Klerk’s willingness to end apartheid. He fulfilled his mandate over three and a half years to renew SA’s image abroad and repeal US sanctions. He eventually accompanied President Mandela during his state visit to Washington DC in October 1994.

De Klerk proved sincere in his vow to dismantle the legal architecture of apartheid. But trusting De Klerk was far more challenging for Mandela during the multiparty negotiations between 1990 and 1993 that ultimately led to the interim constitution of 1993. Even after the 1994 general election, when De Klerk served as deputy president under the government of national unity, relations with Mandela proved difficult and eventually broke down in 1996, leading to the National Party leaving the government.

De Klerk learned after his presidency that his own legacy would be defined not just by his actions, but by perceived motivations behind his actions. This measure of judgment is a product of De Klerk’s unique and morally-complex role in history, only comparable to a handful of 20th century leaders such as Mikhail Gorbachev, the last president of the Soviet Union, who also participated in a tyrannical regime while later voluntarily relinquishing power.

De Klerk’s predecessor, PW Botha, made it explicitly clear that his own, albeit limited, reforms on racial policies were motivated by self-preservation of SA’s white and Afrikaans communities, arguing that “We must adapt or die”. De Klerk instead claimed his actions were driven by a change in his views and a recognition of the injustice of apartheid.

However, the extent to which he was willing to acknowledge the full depths of apartheid’s cruelty was frequently queried during the last decade of his life. This was largely due to De Klerk’s futile attempts to justify and clarify his own views during broadcast interviews. In February 2020, he said that “apartheid cannot be compared with genocide” and refused to consider it a “crime against humanity”, as has been defined by the UN since 2002.

De Klerk’s post-posthumous video address to South Africans, where he apologised “without qualification” for the “pain, hurt, indignity and the damage” of apartheid indicated his insecurity over the unsettled status of his historical role. The fact that the former president felt compelled to issue such a statement served as an acknowledgment of personal defeat in his failure to define his own legacy.

History has proved that De Klerk was sincere in his determination to repeal apartheid’s legal framework and shift the country towards democracy. Whatever his true motivations were, the success of the process of change was ultimately achieved through the willingness of apartheid opponents, such as Mandela, Mangosuthu Buthelezi and my grandfather, to work with him.

Yet, after participating in the horrors of apartheid, De Klerk could only ever, at best, achieve partial redemption. South Africans will continue to debate the former president’s rationale and extent of his remorse for decades to come.

• Schwarz is a UK-based writer and political commentator.

Even if he never saw the entire picture, the former president placed SA on an irreversible path
Opinion
7 months ago
Next Article

CHRIS THURMAN: Imagining Madiba where we thought he would be

Despite demands for justice for apartheid crimes, authorities still dragging ...

CHRIS THURMAN: Imagining Madiba where we thought he would be

Despite demands for justice for apartheid crimes, authorities still dragging ...