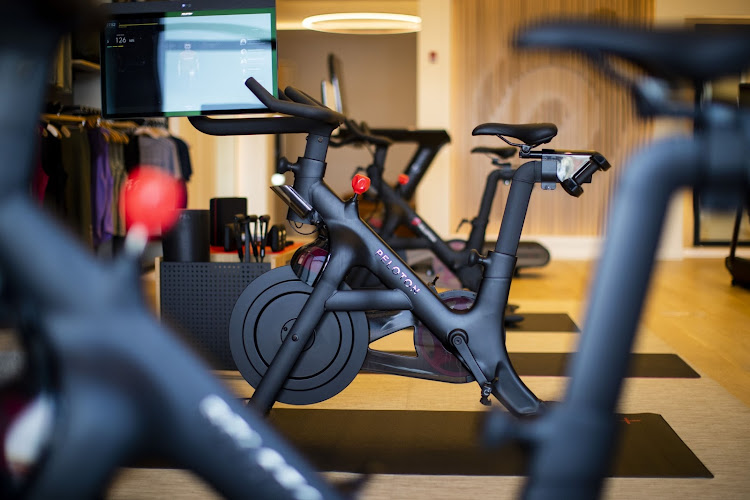 Fitness enthusiasts love cringeworthy motivational cliches such as “sweat is your fat crying” and “pain is just weakness leaving the body”. Investors have their own version. Their white-knuckle ride in shares of Peloton Interactive has them turning to the stock market’s favourite when-things-get-hard platitude: “The cheaper it gets, the more attractive it is to an acquirer.”

At least that’s the hope. Before Tuesday, Peloton shares were down 69% for the year as safety recalls, ballooning costs and weaker demand for luxury at-home fitness equipment knocked the pandemic winner off course. More than $30bn of shareholder value was wiped out, much of it on November 5 after a grim earnings report. What changed on Tuesday was that Peloton announced a plan to sell $1bn of stock, its first time offering shares in the company since going public in 2019. The market responded by driving the price as much as 15% higher.

That’s not usually how it goes with stock sales. The more logical sequence of events is: stock rallies, company offers shares, price falls. However, in a market highly susceptible to speculation and blind faith, some Peloton shareholders are betting that the stock has become so beaten down that it effectively puts the company in play. The share offering — often interpreted as a desperate measure — is like waving a for-sale sign to prospective buyers, including perhaps Apple.

The other possibility is that Peloton is looking to raise money to make its own acquisitions, which would please investors less. In April, the company closed on a $420m purchase of Precor, an exercise-equipment maker that gave it more manufacturing space and commercial customers. That deal aside, there are so many fad fitness brands at this point, it’s hard to see how buying one would significantly change Peloton’s competitive position.

While Apple is looked to as the default suitor for a laughable number of takeover targets, its prowess as a technology-hardware company and penchant for subscription products does complement Peloton’s business model. Peloton could also be a good fit for Apple as it moves deeper into fitness through the Apple Watch and Apple Fitness+ service, according to Anurag Rana and Amine Bensaid, analysts for Bloomberg Intelligence. “One would argue Apple does hardware best, so it could solve the lack of innovation that Peloton is having,” Bensaid said. 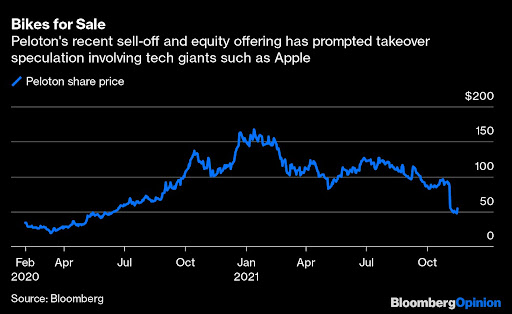 Normally a $1bn share offering would erode market value, but visions of a takeover are dancing in investors’ heads. Picture: BLOOMBERG

At its high in January, Peloton fetched a $49bn market value, much of it built on the premise that it would continue to shake up the at-home fitness industry with creative products. But other than its flagship stationary bike and live spin classes, Peloton’s innovation has amounted to very little. For example, it introduced two treadmills, bringing back what would seem to be an outdated piece of cardio equipment; one proved deadly for children who could get sucked underneath, while the other sometimes lost its touchscreen (that one went back on the market in August). Last week, it introduced Peloton Guide, a $495 set-top box that uses a camera and artificial intelligence to guide users through strength-training workouts. The Guide wouldn’t seem to have a large market.

Meanwhile, a worrying amount of cash is being used to promote its products — products it’s also discounting. Sales and marketing expenses surged 148% last quarter as Peloton tries to attract younger, more price-sensitive consumers by cutting the price on its original Bike. The operations burnt through $561m of cash.

When the US was still largely under Covid-19 lockdowns, Peloton was valued at as much as 10 times forward revenue, putting it on par with streaming favourite Netflix. Now it trades for 3.3 times revenue. As Bensaid notes, that puts Peloton on similar ground as Fitbit, the once-high-flying fitness-device maker, leading up to its sale to Google parent Alphabet.

Whether a buyer bites depends on whether any see Peloton’s best days ahead rather than behind it. But it’ll be hard to create better sales conditions than when the entire planet was stuck at home.

This column does not necessarily reflect the opinion of the editorial board or Bloomberg LP and its owners.

Devlin Brown at the water cooler: What exercise gives me the most bang for my buck?

While there is no magic exercise to tick all boxes, three offer a good return on investment
Life
2 months ago
Next Article